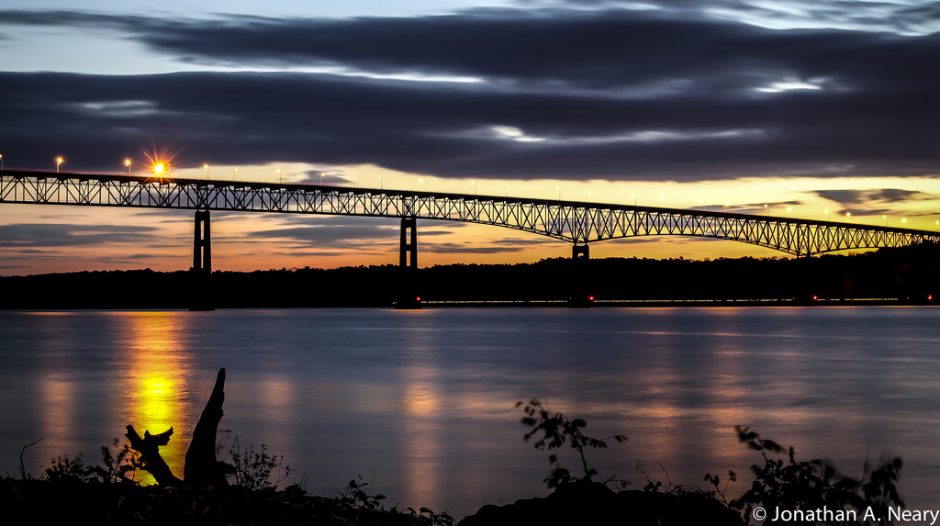 To hear this sermon preached from the pulpit at UCJ, just press play below:

Delivered at the United Church of Jaffrey.

The Rhinecliff Bridge rises out of the surrounding woodlands.

And suddenly I am aware that I have driven into the sky.

It is evening, and the sun has only just gone down behind the Catskill mountains in the west.

And I am in the sky…

And I am above the river,

The vast Hudson, that stretches north toward Albany and its source in the distant Adirondacks — south down to New York City, past Lady Liberty to the sea.

And I am in the sky.

This big view — the sudden opening out, awakens me to the curvature of the earth —

to the atmosphere, with its long horse tail clouds descending from pink to a deeper, more essential purple.

As most of you know, I spent all of last week at an extended seminar — a professional development training for my teaching job.

The training was held at Bard College, which is in New York State, a couple hours north of New York City, on the Eastern bank of the Hudson river.

Bard is in an absolutely gorgeous location

The campus lies among lush trees of midsummer that give way, here and there, to wide expansive fields that, in their turn, swoop down to the great river.

Some of the buildings are stately old manors from the turn of the last century, that have grand views of the distant Catskill mountains.

But for all its grandness, there were some odd details about the place.

The main parking lot, for example, was not paved.

not paved?  How odd!

The main dining commons is set up in a peculiar way that struggles to cope with large influxes of people without creating annoying backups.

Walking from building to building it is impossible not to notice that many of the plants growing in the plantings were not perennials.

They were not even annuals.

Were the buildings and grounds workers on sabbatical?

Worst of all, though, was the dorm room that they gave me.

A thin, vinyl covered mattress sat perched atop of a what looked like the top half of a short bunkbed.

I had to clamber up onto it.

The sheets, provided were sad and thin, and neither of them was fitted, so they kept slipping and sliding around when I tried to sleep.

I couldn’t figure out how to turn off the Air conditioning.

and as the night wore on, I got more and more bent out of shape.

And I’m n to just talking about my spine…

How could a competitive liberal arts college maintain a good reputation, and be so lackadaisical about these important details?

In the morning, I stumbled, bleary eyed to the poorly designed dining commons, and stood in a long line…

and when, at last, I succeeded in sitting beside my colleague with a cup of blessed coffee in hand, I’m afraid, I could not manage a polite answer to his inquiries.

How had I slept?

I gave him an earful. 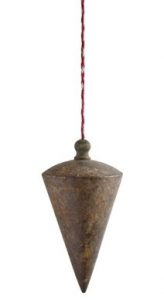 In the passage that Sarah just read for us, the prophet Amos sees God.

The Lord is standing beside a wall, holding a plumb line.

And Amos said: “A plumb line.”

Then the Lord said,

“See, I am setting a plumb line
in the midst of my people Israel

What is a plumb line is?

Before I go on, I must admit to you that I am not a carpenter.

I own a few different sized Phillips head screwdrivers, some duct tape and some hammers of various weights and shapes…

but I spent a hour, earlier today, trying to locate a wayward utility knife, and I recently spent 10 bucks at a yard sale on a cordless drill that does not work.

I still haven’t found the utility knife, and the cordless drill has been demoted to a useless drill.

My tool-guy credibility is questionable at best.

Does Martha Stewart give her opinion on genetic sequencing?

It not really her thing.

Did Elvis Presley wax eloquent at a the quilting convention?

It wasn’t his thing.

I don’t even own a plumb line.

But I can tell you this…

Since it is mentioned in the book of Amos, we can, at the very least, surmise that the plumb line has been around for a long time.

This elegant device that is made of a string tied to some kind of weight.

A modern one — the kind you might buy down at Belletetes — uses some form of metal as the weight — a piece of metal that has been shaped into a point — almost like the head of a sharpened pencil.

A string comes up out of the center of this weight.

You can tie this string, and hang the plumb, and voila you, and this elegant simple tool, have collaborated with gravity to describe a perfectly vertical line.

This humble tool — this simple technology — has been of utmost importance to human civilization.

All of those cathedrals, and pyramids, and towers (with the possible exception of one tower in Pisa) are standing up straight, because of the humble plumb line.

The plumb line is the tool that kept all these structures “true.”

So when, in the book of Amos, we are told that God holds a plumb line, we know one thing.

We are being measured.

We are being compared to a certain version of what is true.

This “true” is simple.

This “true” is before us at all times.

This “true” is as pervasive as the gravity that holds us to the earth.

My dear friends Jordan and Kevin live in Kingston New York — only 20 minutes, by car, from Bard College.

When the seminar breaks for lunch, I talk to Jordan on the phone. After a few minutes of quality belly-aching, it is decided…

I will spend the rest of the week in Jordan and Kevin’s guest room.

At dusk, after making an appearance at a conference social hour, I set my GPS to Jordan and Kevin’s address, and ten minutes later, to my surprise and delight, find myself driving out into the sky.

The plumb line that appears in the Book of Amos, reminds me of Paul Tillich.

Tillich, by far, one of the most accomplished and important theologians of the twentieth century — described God as “ultimate concern.”

Perhaps, the plumb line in the hands of God, is a symbolic expression of God distinguishing the true, from the crooked.

The ultimate from the preliminary.

For this, certainly, is among the tasks that we, as humans, must try to figure out.

We must try to figure out what is of ultimate concern

and what, though important, is but preliminary.

My time at Bard was enhanced because I stayed with my friends.

This is not merely because I found a comfortable bed and slept well each night.

It was also because the concerns of the day were bracketed by ultimate concern.

In the morning and in the evening, I drove out into the sky, felt the curvature of the earth, the movement of the water, the passage of the sun.

Each evening, I held the baby in my arms

Recalled, from some deep well of instinct, the right rhythm to lull her to sleep;

gave her the bottle, burped her; napped with her; gave her, in her inconsolable moments, back to mom.

And on one of those evenings, after the little girl was asleep, my friend Kevin — who had, at one time worked for Bard himself — told me something interesting about those peculiarities — those underperforming collegiate perennial beds, vinyl mattresses and unpaved parking lots of Bard.

Bard it turns out, is a school with a deep sense of social conscience.  When the college is given a large financial gift, it is less likely to build a fancy new student center, and more likely to use the money funding schools in high needs inner city neighborhoods.  The Bard Prison project, currently enrolls more then 200 incarcerated prisoners.  Of the prisoners who relieve degrees and are released, more then 97% do not return to prison.

“I was a prisoner,” Jesus said “and you visited me.”

Some concerns are preliminary.

The right kind of mattress, a paved parking lot.

And some concerns are ultimate.

The plumb line is a simple tool.

We use it to decide what is true.