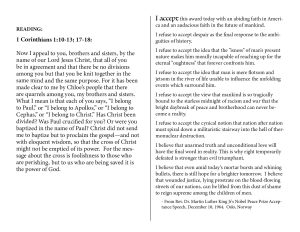 Shortly after the festivities at the Park Theater began, a chorus made up of children from Jaffrey/Rindge combined Grade Schools stood up, turned around to face the crowd, and sang a traditional South African spiritual.

We are marching in the light of God

We are marching in the light of God.

A smile took over my face.  I couldn’t have controlled it if I tried.  Owen, who was sitting next to me, was beaming.  Of course, everyone was fairly overflowing with pleasure.  All the parents were busy taking videos with their phones.  The whole place was awash with a great swell of pride and pure delight.

Is there anything finer than this?  As I surveyed the children,  I was, of course, enchanted by their beauty – a beauty that is not only because of the  unaccountable smoothness of their skin, or brightness of their eyes.  When we look at them we are aware of their innocence and potential. Their whole lives stretch out before them – a great uncharted landscape of wonder and possibility.   In their purity, they seem sacred – and this makes us want to protect them – shield them from all the pain and suffering of the world.

I looked over and noticed that the keynote speaker for the evening, Aaron Mair was standing in the aisle making a video with his cellphone too!  Everyone was getting into the act.

I promised you,  last Sunday, that I would preach this Sunday about the Reverend Doctor Martin Luther King Jr., and I suppose you can see by the fact that the great man’s august visage is gracing the cover of this morning’s  bulletin, that I intend to follow through on that promise.

But before we do this I want to let the Apostle Paul have the floor for a moment to set the tone.

In the passage from his first letter to the Corinthians that Liz just read for us, the apostle makes a direct appeal to the members of the ecclesia in Corinth – one of the first communities to follow the teachings of Jesus Christ.  In the letter he wrote:

Now I appeal to you, brothers and sisters, by the name of our Lord Jesus Christ, that all of you be in agreement and that there be no divisions among you but that you be knit together in the same mind and the same purpose.

Paul’s advice is not hard to figure out.

“All of you be in agreement…” he says.

Let “there be no divisions among you”

“Be knit together in the same mind and the same purpose.”

Paul is asking for unity.

This sounds eerily familiar… it sounds like the immature vying for power that happens in high school, or, might I suggest, the House of Representatives.

Paul, like you and I, knows how fatal such contention can be to a community.  If we were to translate his sentiment into the language of present day, Paul might sound a bit like a tired gym teacher trying to wrangle a gaggle of squirmy fifth graders:

But what, exactly, is Paul really asking of us?  Unity is not as easy as just saying “C’mon guys!” – because when a leader asks for unity, that leader is asking us all to agree.

If you don’t agree with what is being proposed, then you are not going to fall into line, are you?

I will gladly agree to be part of a community dedicated to feeding the hungry or housing the homeless, but I will not agree to join the Nazi Party or the Ku Klux Klan.

If the Klan asked me to join up, I would assert my right not to agree.

I have always, from my tenderest age, jealously guarded my right to disagree!

When I disagree, I assert my free will – the solemn and sacred right that I have, as a human creature, to choose for myself the course of action that most fulfills my sense of purpose and meaning.

If this choice – to agree or disagree – were taken away from me I would find myself in the most insufferable predicament a human can be in – I would be imprisoned in someone else’s destiny, instead of my own.

I would no longer be free.

So, it is not enough for the Apostle Paul, or anyone else for that matter – even Jesus – to say “C’mon guys!” and expect us all to obediently fall in line…

I reserve the sacred right to disagree!

If you want me to agree,  you must convince me.

Your appeal must resonate with my spirit – the part of me that recognizes what is right and what is good.

I think it is fair to say that Aaron Mair, the keynote speaker at the MLK event, could have mentioned Dr. King a little bit more than he did.

To be sure, what he did talk about was very informative and incredibly important, but other than a few rhetorical gestures, he seemed to have forgotten to whom the event itself was dedicated.  Early on, though, he did make one comment that stitched the proceedings back to the civil rights movement…

“It’s inspiring to hear the children’s voices raised in song,“ he said, “and as we listen to them, it is worth remembering that little black children who were the same age as this, were blasted with fire hoses.”

The authorities responded by making mass arrests.  The students, trained in non-violence, filed quietly into the school buses that were brought in to transport them to jails.  All available cells quickly filled beyond capacity, and the overflow were detained at the local fairgrounds.  Eventually, the children were released, but  they repeated the march the next day.

This time the authorities, in frustration, met them with police dogs and high-pressure fire hoses.

Media coverage of the Children’s March brought the fight against segregation to the national stage.  Viewers were confronted with images of dogs attacking children, of high pressure fire hoses beating them up against walls.

It was a pivotal moment in the civil rights movement.

Segregation was no longer just a social problem that was happening somewhere else.

It was now a moral outrage that called into question the soul of the nation.

Could America stand by and watch as police dogs were intentionally set upon defenseless schoolchildren?

Americans of European descent had been quietly benefiting from a system that protected their well-being, their power, their comfort – it was a system that they could easily agree with.

They could not agree with this.

Martin Luther King Jr was awarded the Nobel Peace Prize in December of 1964.  In his acceptance speech he said:

“Civilization and violence are antithetical concepts.”

We cannot call our society “‘civilized” if, in an effort to protect its order, we are willing to set attack dogs on innocent children.

(You can follow along on the back of the bulletin:)

I refuse to accept despair as the final response to the ambiguities of history.

I refuse to accept the idea that the “isness” of man’s present nature makes him morally incapable of reaching up for the eternal “oughtness” that forever confronts him.

I refuse to accept the idea that man is mere flotsom and jetsom in the river of life unable to influence the unfolding events which surround him.

I refuse to accept the view that mankind is so tragically bound to the starless midnight of racism and war that the bright daybreak of peace and brotherhood can never become a reality.

I refuse to accept the cynical notion that nation after nation must spiral down a militaristic stairway into the hell of thermonuclear destruction.

I believe that unarmed truth and unconditional love will have the final word in reality. This is why right temporarily defeated is stronger than evil triumphant.

I believe that even amid today’s mortar bursts and whining bullets, there is still hope for a brighter tomorrow.  I believe that wounded justice, lying prostrate on the blood-flowing streets of our nations, can be lifted from this dust of shame to reign supreme among the children of men.

I began my sermon this morning with a description of children standing up and raising their voices in song.  A big group of healthy, sweet children of all different shapes and sizes and colors, standing together and singing proudly for a great gathering of their loved ones.

This is more than just a happy moment.

This is the vision that Dr. King sought.

I hear, again, the voice of the Apostle Paul, and, with this vision in my mind, I say yes…

When I see children of all shapes, colors and sizes singing together, I have found something to agree with.

Give us unity in our refusal to accept a society that depends, for its survival, on the use of violence…

When we refuse to accept violence, we march in your light.

When we disagree in this way, we agree with something greater –

To disagree with dogs attacking children,

is to agree with children singing together.

Give us eyes to see this God – to see what we have achieved!  We are not perfect, but our children are singing together!  This is what it means to be civilized.   In this, let there be no divisions among us.  In this effort, let us be knit together in the same mind and the same purpose.