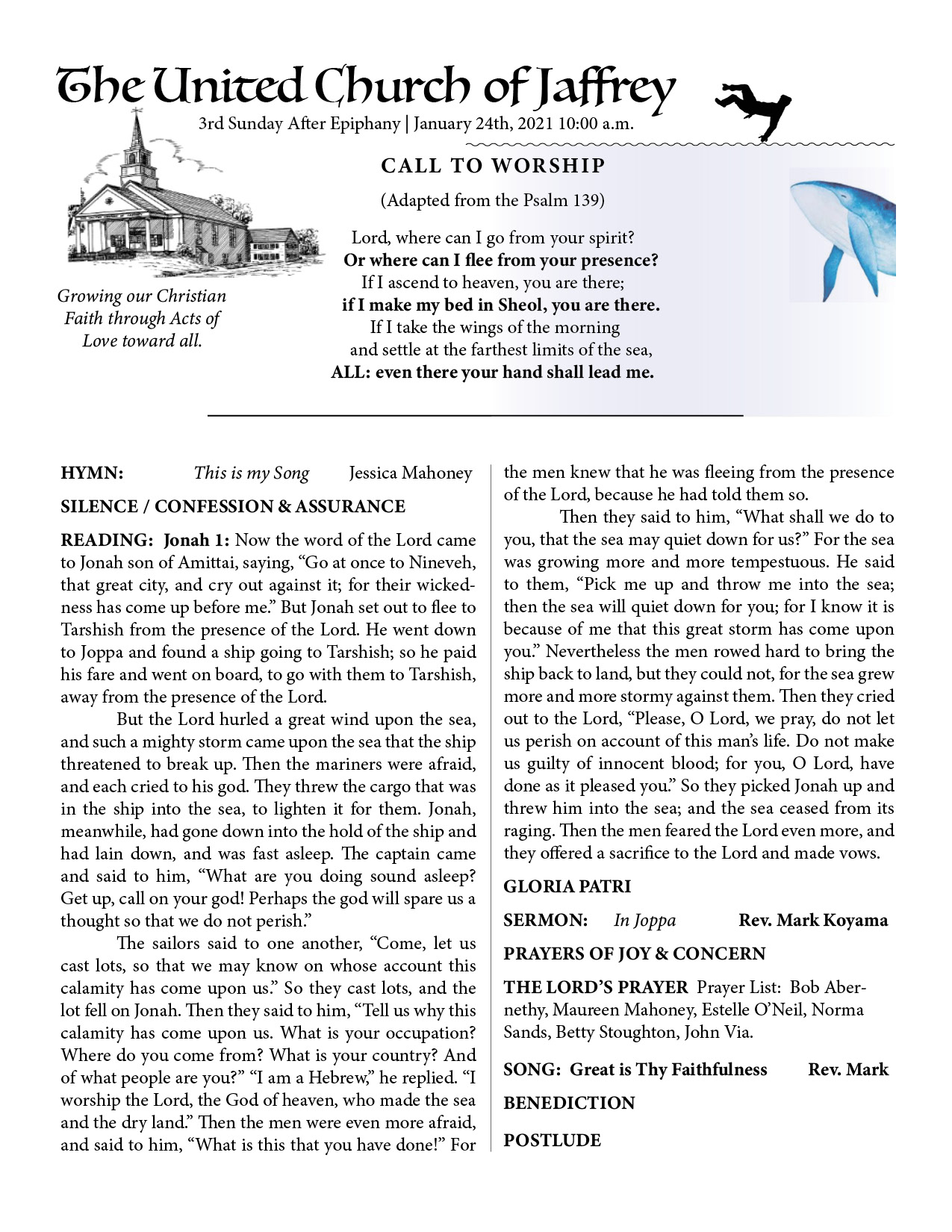 The storm raged all night, but when the priest arose at day break, the ocean was strangely calm.

The men appeared in ones and twos wandering up the road like crabs blown in from the sea.  The priest saw them, standing outside the gates of the temple, but he ignored them, seeing, instead, to his morning ablutions.  A handful of tired mariners resting at the edge of the road.  Soon enough they would melt into stir of the docks.

The priest washed his face and hands. Everything was different now that  he’d been given the temple in Joppa.  Two day’s journey from Jerusalem, but so far, it seemed, from home.  Joppa was fast becoming the busiest port in Judea, with vessels docking and departing everyday, catching the trade winds north towards Corinth, or as far, God forbid, as Tarshish, at the western edge of the world.  No one stayed here.  No one but the day laborers at the docks, the slaves, the prostitutes, and him.

When he passed the window again, he saw that a small crowd was now gathered at the gate.  About twenty men.  Mariners all.  He knew the type.  You could not spit, in Joppa, without hitting one — swarthy men, weathered by years of salt stinging wind; young boys with wild knotted hair and stringy muscles, wide eyes.  He hated them for their drunken vulgarity, their lack of shame, for the threat (and the reality) of their violence.  But now they stood looking at the temple gate with their hands at their sides like a group of whipped children.  What was wrong with them?

The priest walked down, emerged from the temple and stood before them, the iron gate between them.  A boy was pushed forward.

“Kohein,” the boy said, in broken Hebrew “we have come to offer sacrifices to your God.  The God of the Hebrews.”

There was a stir among the men.  A profane eruption of anxiety, expressed in every guttural tongue…

“We must…” the boy said.  He came slowly and wrapped his small fists around the metal gate.

God told Jonah to go to Nineveh, but instead Jonah ran away.

This is the basic plot.

God has all the power.  Jonah has no power.

The only thing Jonah has is a lot of Chutzpah — stubbornness and a reckless willingness to snub his nose at authority.

Well, Jonah may be foolish, but his foolishness makes for a really excellent story.

Unfortunately, though, Jonah’s amazing story has been tamed by its   traditional Sunday school interpretation — the convenient moral that we automatically jump to when we look for the meaning of the tale.

The interpretation is a familiar one.  It goes, of course, like this:

God wants Jonah to do something.

Jonah doesn’t want to do it.

God finds a way for Jonah to do it anyway.

Youngsters in Sunday School come away from this story with this lesson:

God may want you to do something

You may not want to do it

God will find a way to make you do it anyway.

You may not get swallowed by a whale (hopefully not) but God will find a way.  That’s the traditional interpretation anyway.

It’s kind of a “Puppet on a string” theology.

As you can gather from my attitude, I’m not crazy about this traditional interpretation.

It makes me wonder about free will.

It makes me wonder about the nature of human destiny.

It makes me wonder about the nature of Divine authority.

When I question these old stories in these ways, I feel almost like an atheist!  I can hear myself coming up with the very same objections to the story that atheists come up with when they hear these stories.

What kind of God does this kind of thing?  Causes a big storm to come up, and forces the frightened mariners to toss Jonah overboard.  Makes a big fish swallow Jonah.  The God of this story is like an abusive overbearing parent, or a tyrannical political leader.  If this is what God is really like, faith becomes more about obedience and fear, than about devotion and love.

But I’m not an atheist.  I like this story.  What I don’t like is the traditional interpretation.

The trouble with the convenient moral for a story, is that if you jump to it too quickly you miss out on all the beautiful subtle nuance of the story.  You miss out on all the amazing clues that the story gives you about how people lived thousands of years ago.  You miss all the delicious ways in which they thought about the world in a totally different way than we do… and all the surprising ways that they were very similar to us.

Perhaps we miss out, also, on some ways that the story gives us little hints about God…

I am drawn to the details in the story that show how they dealt with their position.

These weather beaten tradesmen, as humble and simple as they may have been, did not mess around.

The first thing they did was ask their gods for help.

When his proved unhelpful, they summarily tossed all their cargo overboard to lighten the ship.

You can tell that the mariners know exactly what is going on.  This storm must be a certain kind of storm that they immediately recognize.  This isn’t just a storm — this is an angry god storm.

The most important job — it is quite clear to them — has nothing to do with fixing the sails or turning the boat around or anything like that.  They need to appease the angry god.  When they find Jonah asleep in the hold the captain wakes him up, saying:

“What are you doing sound asleep? Get up, call on your god! Perhaps the god will spare us a thought so that we do not perish.”

Jonah, of course, knows exactly what is going on.  God wanted him to go to Nineveh, and instead he ran the other direction.  Once he is awake, the sailors figure it out quickly — they cast lots and the lot fell on Jonah, who confesses.  “It’s me” he says, in so many words.  “Toss me overboard, and our troubles will be over…”

But here is the hidden loveliness of the story.

The sailors have been trying desperately to find out which God is angry.

They figure it out.

They know that Jonah is the problem.

They know that Jonah’s God is the angry God…

And yet, these crotchety old weatherbeaten sailors don’t summarily toss the troublemaker overboard…

These foreigners, who have their own gods, are determined to try to save Jonah…

They valiantly row toward shore…

And only when it is absolutely clear that they will perish… only then, do they throw Jonah over.

I am drawn to the immensity of that drama — the improbable and beautiful evidence of compassion among this crew that we might easily dismiss as a motley gang of wizened ne’er do wells.

The sea is calm now, but in the eerie silence that follows, they realize that they have lost their livelihood with their cargo, and they must somehow fulfill the vows they have made to this God of the Hebrews.

Everyone, even these mariners know and act upon the compulsion of humanity — the raw reality of compassion.

What stories are told by the untold story?