To hear this sermon, click the play button below… 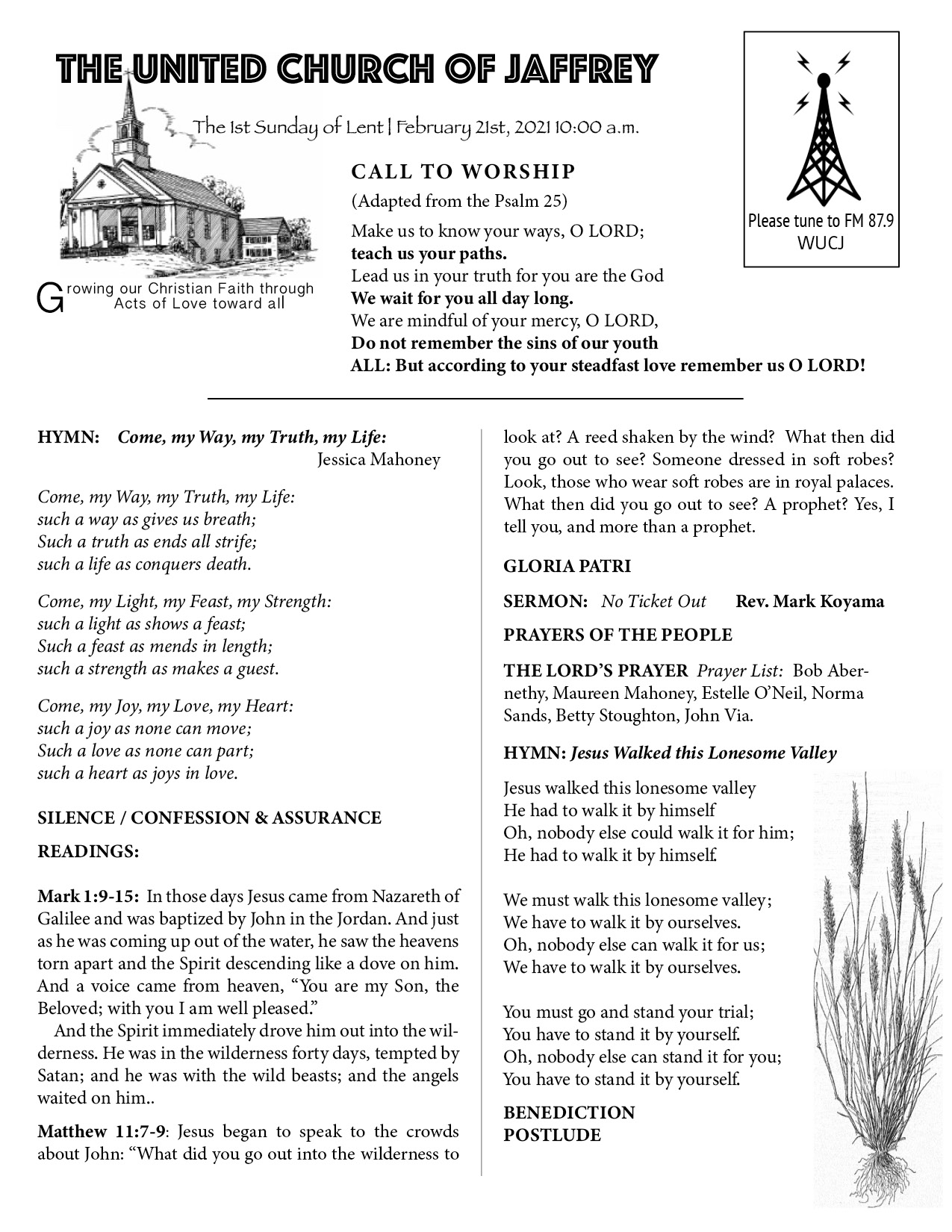 Like many young people, I was all at loose ends when I graduated from college in the year of our LORD 19 hundred and 88.  About the only thing I knew for sure, was that I was in love, and my singular ambition was to be with her.  Not knowing what to do herself, she’d followed her friend, who in turn followed her boyfriend — this logic leading all three to live in a semi-permanent structure on the edge of a pasture on Martha’s Vineyard.   So, quite naturally, that is where I ended up too.  Four young college graduates in a field in West Tisbury.

The boyfriend — the other one, not me, — was our connection to place.  He was the apprentice of a local sculptor who made enormous white figures — and these immense, and, thankfully, benign figures were our companions in the mist as each day began. They threw long odd shadows that we played in, at day’s end.  But this halcyon life began to lose its charm when the weather gradually turned chilly.  At length, with the help of the classifieds section of the local paper we found our way, for a sum, into the basement of a local gym teacher and his wife.

It was now the off-season, and all of the tourism jobs dried up overnight, so the only thing left to do was try my luck with the trades — masonry, painting, floor sanding, and the like.  I was strong, but  I’d grown up with parents who made their living using their minds, so I was pretty awful at swinging a hammer and wielding a paint brush.  The jobs never lasted long.

Somehow I got a job manning the gas pumps at the Shell station by the docks in Vineyard Haven.  As the new guy, I got all the worst shifts — nights and weekends.  I took them.  The basement wasn’t free — nor was my girlfriend’s approval.

There was an inscrutable, deep beauty to that gig.  The bright ice cream parlor days of summer gone, we fell abruptly into the off-season funk — an economy of workingmen and their no nonsense, tired wives; squalling infants strapped into Goodwill store car seats.  All the puddles were edged with gasoline rainbows; no old rag could get the lonely stink of petroleum distillates off my hands.  When I was not at the pump, I sat huddled in a room the size of a broom closet, marking my time with the arrival of the ferry that announced itself every three-quarters-of-an-hour, with a low mournful horn that was swallowed, as soon as it spoke, by the looming darkness over the ocean.  I actually enjoyed the romance of all this —  perhaps because I knew, in some blundering way that if I wanted, I had a ticket off-Island.  This working class adventure was not my reality.  It was material for a novel, not the demand of circumstance.  I could always go home to mom and dad.

One of the central assertions of our shared Christian faith — an idea that you have heard me return to time and again in my sermons — is the idea that we are all — each and every one of us — made in the image of God.

The scriptural source for this assertion comes from the 27th verse of the first chapter of the Book of Genesis, when, in the midst of the mythic story of origins, God creates humanity… quote

in his own image,

in the image of God he created them;

male and female he created them.

As you know by now, I’m not a particularly dogmatic Christian.  I don’t insist that, in order to be a Christian, you absolutely must believe this, or you must affirm that.  I am not particularly concerned, for example, about the virginity of Mary, or the necessity that the earth was created in 7 days.  Let me rephrase that — I don;t require that we hold these things to be facts.

They are not facts.

If, in order to be Christians, we had to affirm that the Genesis creation story is factually true, we would then be obliged to assume all kinds of ostrich-like contortions in our efforts to ignore the evidence of our senses, and the scientific advances of the last several centuries.  What’s more, if we read the passage about God creating us in God’s image, as historical fact, we might be tempted to think that God is a man with a big beard, and a long white flowing robe.  Isn’t that what it means when it says that God made us in God’s image?  We look like God.

To read that passage as fact, actually reverses the meaning of the text.  It makes God in our image.

There is nothing more dangerous than making God in our image.  That gives us a free pass to do anything we want.

We’ve seen what that can do: The spanish inquisition.  The crusades. Colonialism / The middle passage / the genocide of native peoples.   The holocaust.   No more of that.  Please.

Thankfully since we are discussing a religious text now, we can approach the truth of this passage in another way — a way that does not insist on factual truth.

Science achieves a kind of truth by observing fact and deriving meaning from data.

Religion, achieves truth in a very different way.  It creates story, and derives meaning from symbol.

To insist that we are made in God’s image, is a symbolic truth, not a physical one.

It is our job, as created beings, to discern what that symbolic truth means to us.

The thing happened very quickly — it was over in less than five minutes, but I remember it distinctly tonight — some 30 years later.

It was late at night.  A young man pulled into the gas station.  He was driving an expensive car, so there must have been some story of alienation or depression to explain why he was still on-island after the rest of his people had left for the mainland.  A leftover rich kid, lurking in an empty beach house, driving his mom’s summer Audi too fast.

The driver’s side window slid down a half inch, and a five dollar bill emerged.

No words.  Not even the slightest movement of his head.   The young man did not acknowledge that another human being was present.

The gas cap automatically popped.  I pumped 5 dollars of gas and screwed the gas cap back on.  Before I could ask if he wanted a receipt, he was gone.

Today is the first Sunday of Lent.

On this first Sunday of Lent, we consider a passage from the first chapter of Mark, in which Jesus is baptised.

The story is very precise.  We are in the water with Jesus when he comes to the surface.

just as he was coming up out of the water, he saw the heavens torn apart and the Spirit descending like a dove on him. And a voice came from heaven, “You are my Son, the Beloved; with you I am well pleased.”

We may claim to be made in God’s image — but Jesus is claimed by a voice from heaven!  A spirit descended from heaven.

We are special — but the symbolism of this story tells us quite clearly that Jesus is extra special.  He is God’s son.  The Beloved.

What does it mean to be God’s son?

God has a son… How are we to understand this symbol?

Does God’s son become the King of the world?

Does he marry the most beautiful woman in the world?

Does God’s son setup an online retail conglomerate and become a multi-trillionaire while the rest of the world suffers?

Does he fly off to Cancun when the weather gets cold?

In fact, being God’s son does not give Jesus any of these powers.  You would think it might, but it doesn’t.

What, then, does it mean to be God’s son?

As soon as Jesus steps out of the waters of the river Jordon, the text says…

The spirit drove him out into the Wilderness…

Is that what it means to be the son of God?
You get driven out into the wilderness…

Eventually we left the Vineyard.  We had a ticket off the island and we took it.  I do not think it was necessarily wrong of us to move back to live with my parents.  We were following the expression of my parent’s love.  They cared.

I don’t think Jesus had a ticket off the Island.

Maybe that is part of the symbolic meaning of being the Son of God.

You are driven out into the wilderness, and there you stay, learning about life.

I recognize that gas station moment as a glimpse of that wilderness.  A moment when I became aware of the harsh reality of a world in which there are people who do not treat you as fellow creatures.

The man in the car may have just been tired.  It’s also true that there are people in the world who are happy just to use you.  To them, you are not a fellow creature, you are just part of a cog that serves them…

They are unaware that you are made in God’s image.  Your sacredness in not apparent to them.

This is where symbolic truth leads.

Not to fact, but to meaning.

What is the symbolic meaning of being made in God’s image?

Tonight, Jesus tells me that being God’s son is not a privilege.  It’s not a ticket off the island.

Being made in God’s image has something to do with humility.

It has something to do with taking the hard road of one who really cares.

One who grows through acts of love toward all.

Maybe being made in God’s image is about recognizing the image of God in others…  in any confused, gas besmeared creature you come across in any misty corner of God’s lovely earth.