To hear this sermon as preached, press play below…

I used to think, how will Margaret bear our makeshift poverty after the thorough comfort and luxury in Harley Street, till I have many a time been more ashamed of your seeing our contrivances at Helstone than of any stranger finding them out.’

‘Oh, mamma! and I did so enjoy them. They were so much more amusing than all the jog-trot Harley Street ways. The wardrobe shelf with handles, that served as a supper-tray on grand occasions! And the old tea-chests stuffed and covered for ottomans! I think what you call the makeshift contrivances at dear Helstone were a charming part of the life there.’

I learned something important about the nature of religion and human life last week.

Norma Houghton was my teacher.

For those of you who were here last Thursday afternoon when we gathered to bid a fond farewell to Norma, my ruminations will, at first, sound familiar.

You may recall that I welcomed everyone to the festivities by making reference to a universal notion – that we are born.

The fact that we are all born, was, I said, a universal truth that applies to us all, but is, at the same time, uniquely relevant to Norma, who, as you all know, worked for decades in the birthing unit at Monadnock Community Hospital.

Writing this, it occurred to me that speculating about universal truths is not often done in our culture, and that I, as a minister, am in the unique position of being empowered to do so, without causing everyone in within earshot to roll their eyes.

That, at least, is my hope.

My immunity to eye-rolling comes from the fact that you expect me to talk about religion.

And religion is concerned with universal truths.

Later in Norma’s service, during my brief homily, I switched gears.

At that point, my speculations were not about universal truths, but specific pieces of advice that the Apostle Paul wrote to the early members of the Roman church.

Paul’s advice gave the Roman’s something to aspire to, and my remarks about Norma celebrated how extraordinarily well she exemplified those aspirations to

To hold fast to what is good; love one another with mutual affection; and outdo one another in showing honor.

In fairness, it should be noted that Liz Littlefield also spoke eloquently along these same lines.

Both Liz and I were speaking of aspirational truths ­and, we were both given the license to do so by being in a church – a religious setting.

This, then, is what I learned about religion and human life at the feet of our friend Norma Houghton –

…that the place to examine the interplay between truths universal and aspirational is right here in church, because both of these kinds of truths are solidly in the wheelhouse of the field of human inquiry that is investigated here – religion.

To demonstrate this dynamic, we need only turn to the gospel reading for this morning, from the twelfth chapter of Luke, which contains within it a universal truth.

A man in a crowd asks Jesus to help him mediate a dispute.  The man, apparently, is being cheated out of his portion of his inheritance by his brother.

Instead of showing compassion to the man, who seems to have a legitimate grievance, Jesus warns the man to

“…guard against all kinds of greed; for one’s life does not consist in the abundance of possessions.”

But Jesus is not content with this lesson.  He wants to address a larger, more universal concern – so he tells a parable about a rich farmer.  The farmer’s crops are abundant – so abundant, in fact, that his barns cannot contain his harvest.

Seeing this, the rich farmer says to himself –

I will pull down my barns and build larger ones, and there I will store all my grain and my goods.

Given the circumstances, the farmer’s decision seems pretty practical to me.  It would be quite unfortunate if, for lack of proper storage, his harvest should go to waste.

But Jesus does not agree with me on this point.  His purpose, telling the parable, has nothing to do with the practical considerations of agrarian life.  Jesus is concerned with something more universal.  He quotes God:

But God said to the farmer, ‘You fool! This very night your life is being demanded of you. And the things you have prepared, whose will they be?’

And with this, we have arrived at the universal concern – a universal problem that besets each and every one of us.

Though we do our best (and often succeed) in convincing ourselves otherwise, it is a universal truth that there is never a moment in our lives when we are not a hairs-breadth away from death.

Like the rich farmer in the parable, each of us lives life and makes plans with the basic assumption that there will be a tomorrow.

But that basic assumption, unfortunately, cannot be depended upon.

We are creatures who live in time, and at some point, our time will be up.

This universal truth resides at the core of our existence.

And though it is not pleasant to talk about, religion talks about it.

Religion is perfectly at ease saying “Nothing is permanent.”

We are perishable goods.

Everything, at last, comes to an end.

But there is something odd about this parable, isn’t there?

The parable concludes with Jesus saying:

“So it is with those who store up treasures for themselves but are not rich toward God.”

Death is a universal.  A wise poor man is just as likely to keel over as foolish rich man.

Jesus does not suggest that the farmer’s foolish behavior led to his death.  He is saying that the farmer, like the rest of us, had a limited time on this earth, and he spent that time focusing on his own comfort, when he should have aspired to something greater.

Being rich toward God.

Instead of storing treasures for himself, Jesus says, the farmer should have aspired to be “rich toward God.”

The parable sets up this aspiration for all of us.

An aspiration in the face of our mortality…

Jesus doesn’t tell us what this means here, in this parable, but he does give us clues in other parts of the Bible.

Visit the prisoner he says.

Give food to the hungry.

Be kind to the stranger.

Love your neighbor as yourself.

The amazing thing about all these aspirations, is that they are all about human relationship.

Is this what it means to “be rich with God?”

I think so.  Partially at least.

Christ’s also tells us to “Love God with all your heart, spirit, mind and spirit.”

How do we do that?

It is one thing to love and respect another human being.  How do we love a mystery? 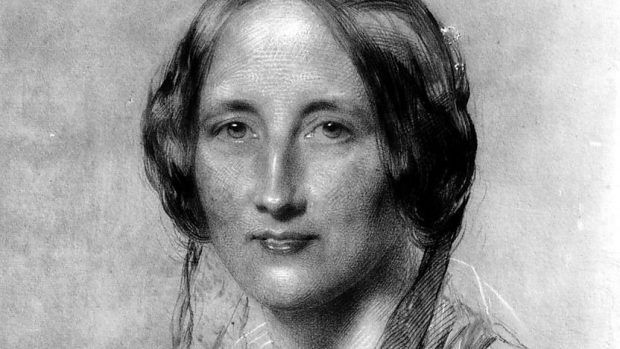 A few years back I stumbled across an endearing notion that, does not in any way solve the problem of death, but does offer us a nice way to aspire to being, as Jesus said “Rich toward God.”

I was listening an audio book of the novel North and South by Elizabeth Gaskell – one of the lesser known, but to my mind, quite excellent of the English novelists of the Victorian era, when my ear picked up a lovely phrase.

I rewinded the audio and listened again.

The main character, a young woman, is talking to her mother about a beloved home that is now gone.  The mother has always been under the mistaken impression that the daughter was ashamed of the old place, because their circumstances were such that they had to be creative with this and that in order to get things done – like the wardrobe shelf that was used as a supper tray, and old tea chests repurposed as ottomons.

But the mother is wrong.  All the makeshift contrivances that made the mother feel inferior, were actually things that the daughter cherished.

They were, to her thinking, the most charming things about the old place.

I feel this way, sometimes, about the way that we worship God.

We are aspiring to honor something that is utterly beyond our understanding, and so we put this and that together to do the best we can.

Our attempts may seem inadequate, but they are acts that, undoubtedly, have within them all the best intention, and are, for this reason, charming.

We contrive, with our hearts, minds, spirits and bodies, to love God, and I think God loves us for it.