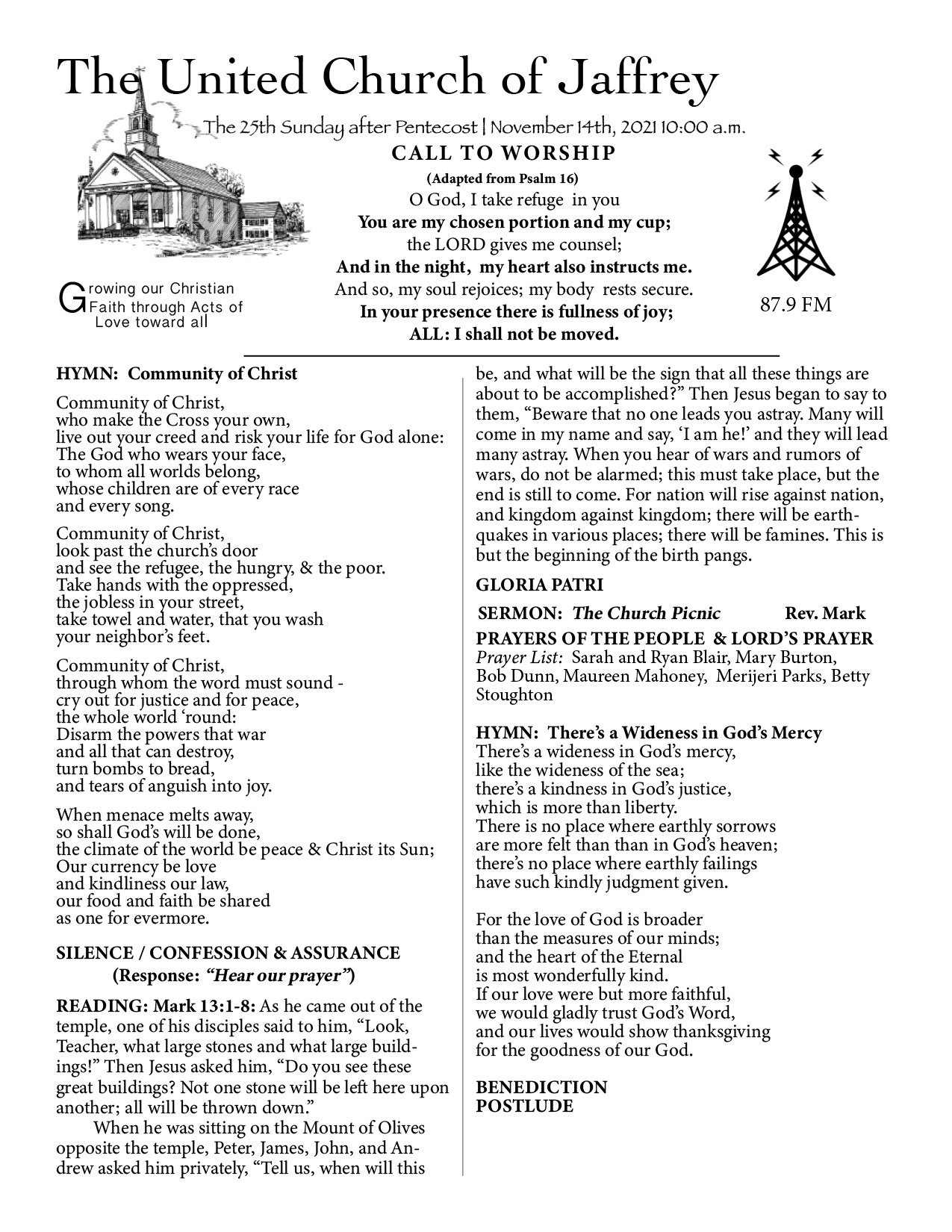 The church picnic was set for one in the afternoon – which gave folks a couple hours to go home if they wanted – change clothes, maybe, or pop the quickbreads in the oven.

At about 1:30, old Mr Newsome, wandered up with a basket in the crook of his arm.  When the deacons (who were gathered in the shade of a the linden trees) saw this, the hearts in each one of their breasts fairly sang out Hallelujah, because Mr. Newsome, who was a shy man, hadn’t been seen around much since his wife Jenny died back in March. Jenny was the churchgoer, she was as loud as her husband was quiet, and some people said that might account for God noticing her first.  But, my, it was sweet to see the old man again – and there he was carrying a basket topped with a cloth of red gingham, clean, if a little threadbare.

“What you got there Mr. Newsome?”

‘Brought you some apples…” the old man said, placing the basket on the picnic table.

“How nice of you Mr. Newsome!”

“Only…” the old man said, in a soft grumble… “only, there aren’t too many of em.  I’m afraid there’s not enough for everyone…”

Pastor Hill, was sitting on the steps of the gazebo, sipping on a can of Pepsi and talking to a group of his people.  One of the young men – a sixteen year old named Jeremiah – was making things pretty hot for him…

Was the young man angry or only playing?

“We got our own temples falling down around us!” he said. “Have you even heard about Ahmaud Arbery?”

“Well, Jeremiah, I may be a religious man, but I’m not God.  I can’t claim to tell you exactly what God is listening to, and what He’s not listening to.  However, I’d like to say that if we care about something, then I expect God cares about it too.”

“Seem like someone better let him know…” Jeremiah said, a little bitterly.  His cell phone buzzed and he whipped it out of his pocket…

One of his friends laughed.  “You gonna text Him, Jerry?”

Pastor Hill also smiled.  He’d known Jeremiah since the boy was too young to walk, too young to talk.  And now the youngster proposed to tell God what was what…

“You got God’s number?” Pastor Hill asked, walking toward the food.

Marjorie, the pastor’s 7 year old daughter, was on the other side of the sandbox playing double-dutch with some girls from crosstown.

Actually she wasn’t playing, so much as teaching – but you can’t teach double dutch without doing double dutch –

“That’s not it…look… move over!”  She practically knocked over a little girl grabbing the end of the jump rope from her.

Majorie had gained some weight during the pandemic, and she figured she could put it to work.  The ropes whirred in the air and hit the ground in that steady rhythm that is as native to this playground, as the squeak of the swings.

I had a little puppy.

His name was Tiny Tim.

I put him in the bathtub,

To see if he could swim.

He drank up all the water.

He ate a bar of soap.

The next thing you know,

He had a bubble in his throat.

In came the doctor… that’s you!

But the little crosstown girl was too timid.  We had to stop and start the whole thing over again.

The next time the doctor jumped in at the right time, and the nurse did too, but the lady with the alligator purse seemed to have left the playground altogether.  That was enough for Marjorie who dropped her end of the rope in disgust and pronounced judgment:

And, as if there was only one sure way to redeem the Sunday afternoon, she added “I need me some lemonade!”

“How bout that Jeremiah of yours!”

“He’s always been like that,” his mother said.  “Even in the womb – always pushing back…”

“Good thing Pastor Hill is such a patient man…”

“He loves that boy like he was his own…”

It was Jeremiah’s mother Esther Little, sitting with Miss Lloyd, the school teacher and Miss Ellen Wright, the head deacon.  Old Mister Newsome, who we met earlier, was there too, sitting quietly, nursing a glass of ice tea.

The Pastor wandered over, and standing before them, it registered upon him that Mr. Newsome was present.

“Well, Mister Newsome! What a pleasure it is to see you.  I hope you know we’ve all been praying for you!  But look who you are keeping company with…” he said, surveying the picnic table with a mock smile.  “You never know what conspiracies you might get ensnared in if you spend time with these ladies…”

Ah, the sound of grown people laughing and at their ease on a summer day!

“Ah yes…” the pastor said.  “Jeremiah has got a head on his shoulders, and he aims to use it.”

“Not everyone will be as indulgent with him as you are Pastor Hill.  Maybe you should give him a little what’s what.”

“Seems like that’s what he’s doing to me,” the Pastor said, and he looked down for moment.

They all sat together for a moment.  They thought about Ahmaud – the beautiful young man, shot dead in the street.  The sounds of the city sifted through the chain link fence and fell through the leaves of the linden trees.

“Pastor Hill, would you like one of my apples,” he said.

“Why, yes, thank you Thomas,” the pastor said.

“My Jenny… she died in February…”

“Well, she talked about that boy… that boy who died…”

“Yes sir.  It was one of the last things she talked about, right there in that hospital bed.  She cried over him like he was own son.  She said God should be happy taking her – an old woman.  She said why not take her, which was all in good time.  Why take that beautiful boy?  She said, seems like God’s not watching out.  Not watchin’ out for Ahmaud.  What could I say?  Well, God took him alright.  Took her too.”

The pastor looked down.  His people recognized the gesture, and let him have his time, and when he looked up again, his eyes were not dry.

“Seems like Jeremiah, and your Jenny were asking the same question.  Does God hear?  Is God watching?  You’re asking me to tell you that He is listening, and that He is watching, cause it hurts too much if He isn’t.

He was quiet again for a moment.

At that moment Marjorie ran up to her father and embraced him, looking up at him from his waist… She was all out of breath…

Pastor Hill smiled at her daughter, and absently handed her the apple that he held in his hand.

“Sometimes it seems like God can only watch one thing at a time.  Maybe he’s looking down at some church people up in New Hampshire, or something, and He’s not bothering with us, down here in the Bronx…”

“Maybe,” Marjorie said, “God’s looking at my apple.”  She smiled and began to eat it.

“Yes,” her father said.  “If that apple blesses you, Darling, God and Mister Newsome here have given it to you.”  And looking out again at this small collection of his people sitting on at picnic tables, he said: “But I want to say that ours is a God who doesn’t choose.  Ours is a God who looks down on all of us – at us, down here in the Bronx, and those folks up in New Hampshire, and, in some mysterious way, at the Jerusalem temple all at the same time.”

The Lord gave this child a blessed apple.  He makes his sun rise on the evil and on the good, and sends rain on the righteous and on the unrighteous.

And not one stone will be left upon another.

“God does not focus on one thing.  God, maybe, can focus on everything all at once – do you think?  But does that mean that God protects everything?”

Not according to Jesus.

He never promised to protect us.

In the life we have been given, we will know suffering.  No stone will be left here upon another…

But that does not mean we should passively accept suffering…

If sin is a turning away from God, then racism is the greatest sin.

It is America’s original sin,

It has moved down from generation to generation, from the Middle passage, to slavery, to Jim Crowe, to lynching, to mass incarceration, to this – young men shot and killed because they wanted to go jogging.

We can’t rest my brothers and sisters.  We can’t rest – and those people up in New Hampshire, who we have never met, and who have never met us – they have to be a part of it too – of working together until every last vestige of that sin is gone from our midst.

Because our God is a God of love.

The child stuck the half eaten remains of her apple into her father’s hands and ran off in the direction of the other children.

And the people said