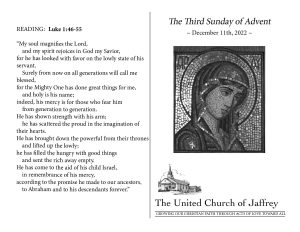 On my first night at the Iona Abbey, the worship service is built upon the theme of “welcome.”

We are about halfway through the service when the worship leader asks us to find and talk to someone we don’t know.  I find my way over to one of the Ladies from Glasgow.

She smiles at me:

Only moments before, when we’d all gathered in the cozy common room for a cup of tea, I’d made quite a production of memorizing the names of each of the ladies, and I thought I’d done a good job but…  well..  bless me, there are thirteen of them!

Jean’s probably about ten years older than me.  She has straight blonde hair that goes a little way past her shoulders.  Her generous face is weathered by care but it is also creased with the evidence of smiles.  She has enjoyed lightly ribbing me for forgetting her name, but her smile changes a bit as she tells me why she’s here.  It doesn’t go away, the smile, but it is no longer an expression of pleasure.  At least… it is somehow much more than that.

“It was alcohol that did it,” she says.  “Some of theirs” she gestures at the other ladies “were overdoses, some were mentally ill.  For most of them, it was suicide.  But my son wasn’t any of that.  It was alcohol.  He just drank himself to death.”

Each one of these 13 women has lost a child.

That is part of what has brought them together.

There is something about Jean’s face when she tells me these things.  As this old pain returns to her  – this familiar pain that has become a part of her story – a part of her body –  she changes, somehow.  She cannot speak of it, without being altered in a subtle way.  Maybe it’s in her eyes, how she brushes aside her bangs so that they catch a little of the candle light.  Perhaps it’s in her mouth, which holds a smile – not with effort, but with a resignation that it knows too well.  There is no use avoiding the pain, but it can’t be invoked without casting its spell.

I can’t tell you exactly what it is, but something in her has changed.

Of the nineteen guests at the Abbey this week, thirteen of them are these remarkable women from Glasgow: a group that call themselves “kindred carers.”

They have found each other because they share the deepest pain that a parent can know – the death of a child.

They are united in loss… but that is not all.

You see, each of these women is not just a mother – they are also grandmothers, and each responded to the loss of their child, by taking in, and raising their orphaned grandchildren. Each of these ladies steadfastly refused to allow the children of their lost children – to be abandoned.

And these grandchildren… you must understand: these kids are the most at risk kids.

Many of these children are born into the world with a heroin addiction.

Many have survived neglect and abuse before they ever found their way to safety.

It is these children – the most at risk children, that the ladies have provided for.  “The Good Ladies of Glasgow” as I call them, have not just given them family – through “kindred carers” they have a community of Granny’s and kid’s their own age.

This community – this  humble group of women – are the safety net that has saved a whole generation of children.

This morning, with Owen and Amy’s excellent assistance, we have joined together to light the Advent candle of love.

The Advent Candle of Love is the final candle that we light before we light the Christ candle on Christmas eve, and I don’t know about you, but I can’t help wondering if this is a “save the best for last” kind of scenario…

Does the order of the Advent candle lighting suggest a kind of crescendo, in which hope and peace and joy gather up all their goodness in service of love?

This makes a certain amount of sense to me, especially if think of it as a kind liturgical expression of Saint Paul’s famous assertion, from 1st Corinthians, that of faith, hope and love, and “the greatest of these is love.”

The idea behind the Advent candle lighting liturgies might be that it is only after we find our way to love that we can finally welcome Jesus, who was born, lived and died for it’s sake.

As a minister, this places a lot of weight on this morning’s sermon.  If it’s all is building up to this moment, this moment better be good.

Of course, this fourth Sunday of Advent is hardly the only time I preach about love.  In fact if it is possible for a minister to preach about love too much – I may be guilty of being that minister.

I am emboldened to do this – to preach over and over about love – because my faith life depends, more than anything else, on Jesus Christ’s core message, that love, as messy and as hard as it, is the only real way to achieve a world of justice and peace.

I really like the message that I put on the UCJ website – a couple of sentences that I write one night in five minutes, almost without thinking, that have subsequently become central to my theological outlook, and my life as a minister, that:

The United Church of Jaffrey is a community based on the idea that we are created by and for love. This notion may be idealistic, but it’s not naive — it’s challenging.

The Good Ladies of Glasgow know this.

When they heard that knock on their doors, it was love coming to rip the hearts out of their bodies, destroy them utterly, and leave them in complete desolation.

Nothing is harder than losing a child.

Love is what makes this loss utterly and completely unacceptable.

And yet, there can be no question that it is love, also that restores life.

All you need to do is look at the picture on the front of today’s bulletin to know this, not with your mind, but with all your heart.

but it is love, also, that brings new hope into the world.  The infant child – the ultimate expression of hope, renewal, innocence and possibility.

By all accounts, Zechariah, the man in today’s reading from the opening chapter of the gospel of Luke, is a fortunate man.

Well, by almost all accounts.

Zechariah is well positioned in society.   He is one of the priests in the temple, and as such, he is one of the very few people who is trusted to enter the sanctuary and attend to the rituals that are so crucial in defining Jewish identity.  In the social and religious contexct of his day, Zechariah is a central character.  He is not on the sidelines.

And yet, there is something missing.

There is a hole in his life.

He and his wife Elizabeth are both getting on in years, and they have come to accept a sad reality.  They will never be parents…

And then one day…

An angel of the Lord appeared to Zechariah, standing at the right side of the altar of incense. When Zechariah saw him, he was startled and was gripped with fear. But the angel said to him: “Do not be afraid, Zechariah; your prayer has been heard. Your wife Elizabeth will bear you a son, and you are to call him John. He will be a joy and delight to you, and many will rejoice because of his birth, for he will be great in the sight of the Lord.

Zechariah is to become the father of John the Baptist.

The birth deserves this angelic heralding because, of course, the child, John, is to be no ordinary child.  The angel tells Zechariah that his son will

“ be filled with the Holy Spirit even before he is born.” and “He will bring back many of the people of Israel to the Lord their God.”

This is not trivial stuff.  The language that is being spoken here, is “big” language.   Through John’s influence, people will be brought back to God.  And not just a handful of people.  John’s influence is to be over the “people of Israel.”

And how will John achieve this?  What important thing will John do, that will influence a nation of people to return to God?

Will he mobilize a massive army on its borders, and start firing missiles at its energy infrastructure just as the cold weather begins?

No.  John would not do such a thing.

Will he sneak into everyone’s houses and fill their stockings with candy?

No.  That would be nice, but no, that was not John’s plan.

Maybe he will buy a massive online social network and flail about until his ego spins out of control and the whole thing disintegrates before our eyes.

Thankfully, no.  John was not that magnificently foolish.

In this passage, the angel tells us what John will do.   Are you ready for this?

In order to bring the people of Israel back to God, John will use the spirit and power of Elijah to:

“turn the hearts of the parents to their children…”

Jean admits that she hasn’t been feeling well lately.  She tells me that she almost didn’t come on this retreat.  At the last minute, her daughter convinced her to go – to take some time for herself.

I can see, as I listen to her, that this time that these ladies are taking at Iona is incredibly precious to them.  Their lives are an endless cycle of work and care.  They never stop.  They never take time for themselves.  They are working class ladies who scratch out a living in one of the most impoverished parts of Scotland.

But there is something I don’t understand.

“If you are here,” I say, “Then who’s taking care of your grandson?”

Jean’s grandson – the most at risk child in Scotland, is in college!

This is the power and the reality of love.  A love that heroin and alcohol, mental illness and suicide cannot destroy.

A love that prevails against all odds… and brings us all back to God.