If you wish, you can hear this sermon as it was preached in the pulpit of the United Church of Jaffrey.  Simply click to the play button below.

In the summer of 2009, my mother and brother and I travelled to Japan to bring my father’s ashes back to the land of his birth.

When we arrived in Narita Airport, we were met by my cousin Naoki, who drove us to his home in Tsukuba — a town about two hours outside Tokyo.  By the time we reached his home it was night, and, exhausted from our journey, we slept.

Because of jet lag, we were up early next morning.  I was eager to see Japan, and so after breakfast, we clambered into Naoki’s car and went to see the shinto Shrine on Mount Tsukuba.

I remember it well.

My cousin Naoki drove us out of town and up the windy mountain road.   At length we came to the top, and we parked the car on the side of a road that was bordered, on either side, by small tourist shops.

I held my mother’s arm and helped her up the stone path.  Soon, the influence of the tourist shops tapered off and we walked under a canopy of ancient trees.  It was still very early, and, other than a caretaker who could be heard raking leaves somewhere, there was no one about.

A quiet morning in late June.

Today is the second Sunday of Advent.

Today also happens to be my father’s birthday.

If he was alive, my Father, Kosuke Koyama would be 88 years old today.

So in addition to dedicating this sermon to the birth of Jesus,

And to the great peace that that birth gives us…

I would like to dedicate this sermon to my father.

On his 72nd birthday, My father sat down and wrote a letter to his grandchildren.

The letter ended up being over a hundred pages long.

Near the end of the letter, my father — who had spent his lifetime studying and teaching religion — wrote the following words:

“Doctrines” are important… he wrote, but we believe in “God” not in “the Creed”… Jesus does not say “Love your doctrine as yourself”  No.  He says “Love your neighbor as yourself”.  We become fanatics if we give our life for the defense of the “doctrine”.

What, then, is ultimately important?  All I can say at this moment is “loving relationship with others”. This is the core of the Christian message as I understand it. This is what the name Jesus Christ stands for. Ultimately there is only one teaching. That is “God is love”. Everything hangs on this. You have here the point of illumination to judge all religions, including Christianity. Take your time. Do not swallow religion. Guard yourself against fanaticism.

The two Bible readings we have heard this morning are related.

Hear again the third verse of the 40th chapter of Isaiah:

A voice cries out: “In the wilderness prepare the way of the LORD, make straight in the desert a highway for our God.

And now listen to the opening three verses of the Gospel according to Mark:

The beginning of the good news of Jesus Christ, the Son of God.  As it is written in the prophet Isaiah, “See, I am sending my messenger ahead of you, who will prepare your way;  the voice of one crying out in the wilderness: ‘Prepare the way of the Lord, make his paths straight,'”

The gospel of Mark begins by quoting from the prophet Isaiah.

This tells us a few things.

It tells us that the prophet Isaiah was important, if quoting him would help establish the credibility of Mark’s gospel.

It also gives us a clue to understanding the religion of Jesus’ time.

The Anchor Bible Dictionary, tells me that the prophet Isaiah lived and prophesied in the 8th century BCE — around the time when the Assyrian empire was the dominant force in the Ancient Near East.

The scholars who put together the Anchor Bible dictionary think that the Gospel of Mark was written around the time that the Romans destroyed Jerusalem’s second temple — around 70 CE.

So Mark quoting Isaiah is kind of like me, in 2017, quoting someone who lived in the 13th century…

That’s a long time ago!

Who even lived in 13th century?

I looked it up in Wikipedia.

Wikipedia gave me a list of 59 “significant people” who lived in the 13th century.

I recognized 8 of them!

Even though we have the Anchor Bible Dictionary at our disposal — even though Google and Wikipedia are literally at our fingertips at all times — we go about our business with very little awareness of history.

800 years?  Forget it!  We struggle to remember things that happened a few decades ago.

The writer of Mark’s gospel, of course, did not have the Anchor Bible Dictionary.  He did not have Google or Wikipedia.  He may have had, or been aware of, the writings of Isaiah — but the vast majority of people who lived at that time were illiterate, and so if the prophecy of Isaiah was common knowledge, it had to have been passed down orally, from generation to generation for 8 hundred years.

So when we see echo of Isaiah in Mark…

When Isaiah’s words: A voice cries out: “In the wilderness prepare the way of the LORD,”…

gets picked up again in Mark as  “the voice of one crying out in the wilderness: ‘Prepare the way of the Lord, make his paths straight,'”

What we are seeing, is not so much a memory of history, but an awareness of culture.

An oral tradition is not an act of remembering.  It’s an act of maintenance.

Or think of it this way:

Who knows who it was, or how long ago it was, when someone first figured out how to roll out pie crust?

Who figured out how to shine shoes?

Who decided it is best to plant garlic in the fall?

But does it matter?

My mother taught me how to roll a pie crust — and that, to me, is what matters.

Mr. Blake, my second grade teacher, taught me how to shine my shoes,

and my dear friend Jacinda taught me about when to plant garlic.

Oral tradition moves from generation to generation along a conduit of relationship.

A current of love.

The food and music that surround Christmas… is our connection to oral tradition.

We are all little bulbs on a string of Christmas lights that reaches back two thousand years — not 800, but 2000! All the way back to that stable where the prince of peace was born.

When I say “Joy to the World”

When I say “Silent night”

We know these things.  They are a part of us.

When we come together and celebrate Christmas, we are not insisting upon a doctrine,

We are taking something old, and we are making it new.

And the connection that is forged in that process of passing down, is a link that connects us to what is most important.

Some of you may be wondering what happened at the Shinto shrine. 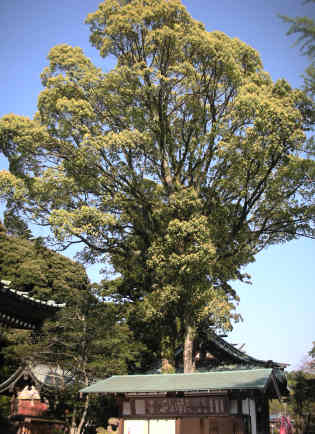 You know I wouldn’t leave you hanging!

So there we were — the four of us — my mother, brother, cousin, and I.

We wandered around the precincts of the shrine — a series of structures built on broad terraces that moved up the mountain.

The shrine was built in the 6th century, but it was only the most recent of a series of buildings that had stood in that spot for 2000 years.

The place has been an active spot of veneration since the time of Jesus.

My mother got tired and sat down, and I wandered off, enchanted by the swoop of the elaborately tiled rooftops, by the votive prayers written on white paper and tied to the low boughs of the trees.

And at length, it started to rain.  I returned to my mother, who was standing beneath an immense ancient gate, and soon my cousin Naoki and my brother joined us there.  As we waited for the rain to let up, Naoki pointed out into the rain.

“No — it is the name of that tree.  It is almost two hundred years old.”

Can you imagine naming a tree?

Not a kind of tree

But a specific tree?

I have never thought of doing such a thing.

But there is something in it, isn’t there?

We name something that we care deeply about.

The first thing we do when a child is born — we name him or her. When we name something, we consider it sacred.

It changes something from “that” to “this.”

And when you think about it — that is what our religion does.

And you shall name him Emmanuel.

The divinity of that child makes all children are sacred, and the sacredness of all children makes that one child divine.

And when we celebrate the birth of the Christ child

And we teach our children, in turn, to celebrate that birth,

We become points of illumination…

A tradition of love, stretching back from time now into time immemorial.