If you wish, you can hear this sermon as it was preached in the pulpit of the United Church of Jaffrey.  Simply click to the play button below.

“…I, on my side, require of every writer, first or last, a simple and sincere account of his own life, and not merely what he has heard of other men’s lives… [Let it be] some such account as he would send to his kindred from a distant land; for if he has lived sincerely, it must have been in a distant land to me. Perhaps these pages are more particularly addressed to poor students. As for the rest of my readers, they will accept such portions as apply to them. I trust that none will stretch the seams in putting on the coat, for it may do good service to him whom it fits.” 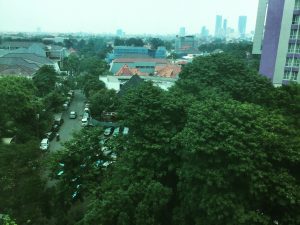 Late last night when I was done with my sermon I received an email that I was pleased to receive. The subject line of the email read “Safely arrived in Surabaya.”  It read as follows:

Good morning (evening to you?),

I have safely arrived in Surabaya, East Java, for training! Really excited. Here’s a picture of the view from my hotel window. Just the drive from the airport to the hotel was amazing. The roads are clogged with motorbikes that dart between the lanes like its a racing game. Kind of scary to be honest.

I can’t believe I’m going to be here for two years! Ive already sweat more in one hour than in the past year combined. Overall, I’m very humbled that I get to follow my dreams like this. I’m in “absorption” mode, just breathing in my surroundings.

And BOY is it hot!

We have just heard the story, from the Gospel of John, of the Jesus’ encounter with Nicodemus.

Nicodemus was a Pharisee.

He was a dignified and well-respected personage.

The gospel of John goes so far as to identify him as “a ruler of the Jews.”

Identifying Nicodemus as a “ruler of the Jews” means something.

It means that Nicodemus had an interest in the status quo.

It means that Nicodemus was invested in the idea that people should obey the rules.

The way Pharisees are portrayed in our scriptures, we Christians have come to associate the word “Pharisee” simply as a Jewish person who was against Jesus.

But the Pharisees were only one of three main sects of Judaism that existed at the time of Jesus.

The others were the Sadducees and the Essenes.

But the Essenes were hard core.  They took vows of poverty and lived in communities outside the populated areas.

So the Essenes were not likely to run into Jesus.

The Sadducees controlled the temple in Jerusalem

They were the most powerful, elite group.

Sadducee priests believed in a literal interpretation of the Jewish law, and they benefited, directly, from people’s observance of that law.

They were at the top.

Sadducees were in the temple.  Jesus was in the streets.

So Jesus was not likely to run into them either.

They believed that the purity laws that defined how priests act in the temple, should also be observed by all Jews in everyday life.

But unlike the Sadducees, they were not in power.

They were striving for power.

And there is nothing more self-righteous than a group that is striving for power.

Striving for power, the Pharisees were out on the street – out on the same street that Jesus was on.

So Jesus was likely to run into the Pharisees.

As many of you know, my daughter Isabel left the country, last week.

Isabel, who is 22 years old, will be spending the next two and a half years as a Peace Corps volunteer in Indonesia.

She is a wonderful young woman, with a really good head on her shoulders.

She has a healthy sense of her own dignity, and she is a good judge of character – and for these reasons, I feel a great sense of confidence in her ability to manage this challenge.

I am still her father,

And she my daughter.

And so, last Monday, we spent the day together – the last day we would spend together for 2 and a half years.

It was a beautiful clear day.

When we got above tree line, we could see Mount Washington in the distance up north, and the Boston skyline in the East.

Up on the summit, we sat and ate the best tasting salami and cheese sandwiches I have ever had.

But it was cold. 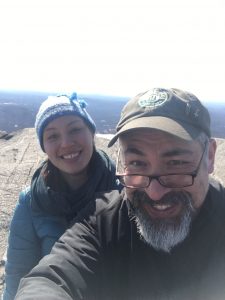 Every time we came out from behind the leeward side of the rocks, and into the wind, we started to quickly lose the feeling on all our exposed skin.

The wind was not blowing hard, but it could not be argued with.

It came down from the heavens.

We did not know where it came from, or where it was going.

Utterly beyond our control.

Feel the wind on your skin…

the wind that rushes through the woodlands, playing in the skirts of the evergreens.

In its cold bite

You feel the touch of distance –

the imagined expanses of ocean and sky…

That we live within…

It is a fearful thing.

I felt this deeply, as I tried to let go of my daughter.

We know this because when he went to see Jesus, Nicodemus went in the middle of the night.

Nicodemus wanted to see Jesus, but he didn’t want to be seen seeing Jesus.

Still, Nicodemus took the risk because, in spite of being a Pharisee…

In spite of being invested in the status quo…

In spite of being a person striving for power…

“Rabbi, Nicodemus says in the text… we know that you are a teacher come from God; for no one can do these signs that you do, unless God is with him.”

This is a nice thing for Nicodemus to say.

One might expect Jesus to respond by saying “Thanks, I appreciate that.”

But instead Jesus says something very odd.

“Truly, truly, I say to you, unless one is born anew, he cannot see the kingdom of God.”

Nicodemus doesn’t get it.

Nicodemus has no idea understand this peculiar thing that Jesus said.  We know this because of his response:

Nicodemus said to him, “How can a man be born when he is old? Can he enter a second time into his mother’s womb and be born?”

Nicodemus, the Pharisee, is accustomed to thinking about religion as a list of rules that must be obeyed.

He is unfamiliar with the way that Jesus teaches.

“Truly, truly, I say to you, unless one is born of water and the Spirit, he cannot enter the kingdom of God.

At length, the wind got to be too much for us, and Isabel and I clambered down off the mountaintop.

Much of the trail was solid ice, but thankfully we made it down without incident, and even had enough time to have dinner before it was time to drop her off at the train.

We made it through dinner, and were about half way down Rte 140, before the tears started to flow.

Neither of us had much to say.

We both just wept.

No matter how confident you are of your daughter’s maturity, it’s still hard to let go – for such a long time.

No matter how prepared you are, it’s hard to say good-bye to your Dad.

It’s hard to say good bye to your childhood.

We arrived at the train station with enough time, before the train came, to cry some more.

And then, when the train arrived,

We hugged and said good bye.

Unsettled by a cold wind

Isabel was born into a new moment in her life.

And her father too, in the midst of separation, felt the abiding presence of a great love.

The Sadducees and the Pharisee’s feared God.

Once you begin to fear, there is plenty to fear

The Sadducees and the Pharisee’s feared God… but they believed they had God figured out.

They believed that if God’s people obeyed the letter of God’s law, they would prosper.

And they also believed that if God’s people did not obey the letter of God’s law, they would be punished.

Jesus, though, wasn’t playing that game.

Time and again, in the gospels, Jesus flaunts the rules.

Time and again, in the gospels, Jesus is presented with situations in which he must choose between following rules or breaking them.

He often breaks them.

But Jesus never breaks the rules for the sake of breaking the rules.

Jesus only breaks the kind of rules that create social barriers.

Jesus is the rabble-rouser who heals lepers…

eats at the same table as tax collectors and prostitutes.

When Jesus break the rules, he breaks the rules in order to create community.

But Jesus’ actions and Jesus’ teachings tell us that there is something more important than rules.

Creating community is more important than obeying the law.

None of you are likely to be surprised when I tell you that Thoreau’s Walden is an important book in my life.

I returned to it, the other night and, imagine my surprise when I found, once again, the passage that Dorothy read to you earlier.  Thoreau said that he

required of every writer, a simple and sincere account of his own life… some such account as he would send to his kindred from a distant land…

Even as I read this passage, Isabel was flying over the Pacific to a distant land…

It is hard to say good bye

It is hard to say good bye to a loved one, when the world is so unpredictable.

And yet, the wind is not only out there under the great expanse of sky.

It is also inhaled into our lungs.

It is molded into words

It is the wind – the great wind under the dome of sky – that shudders through our tears.

These are unpredictable, immense things.

But they are also…

They are elements of the earth

And elemental to our being.

Can we create community, not only with each other, but also with creation?

Can we do anything else?

After all, we are within the immensity of wind and water, but breath and tears are also within us.

But it is risky

To break down the barriers that distinguish between our bodies and the world.

When we break down the barrier that separates our bodies from the world we become awake to our own mortality.

This relationship is essential to our life.

The wind and the ocean are wild beyond our control…

We love in spite this – in spite of this essential lack of control.

The wind reminds us of the hardest task — of loving and letting go.

This task makes us human.

We are made of star stuff

A fact that, at one and the same time, gives us life and confronts us with death.

And so, we live, at every moment, both here, and in a distant land.

To this state of affairs, Thoreau suggests one course of action.

Do not marvel that I said to you, ‘You must be born anew.’  The wind blows where it wills, and you hear the sound of it, but you do not know whence it comes or whither it goes; so it is with everyone who is born of the Spirit.”

Can anyone dispute the truth of this?  The world is an uncertain place.

But within this uncertainty we have love