This sermon is dedicated to the memory of Dr. Paul Farmer 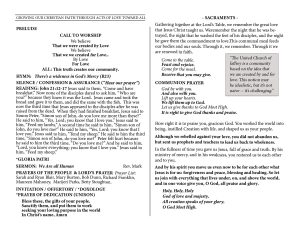 Easter has come and gone, and so the gospel stories that offer themselves  for our consideration are, naturally, ones that take place after Christ’s resurrection.

Even though there are four versions of Christ’s story – the four gospels –  there really aren’t that many post resurrection stories to choose from.  The gospels seem to concentrate quite a bit on the painful details that lead up to Christ’s crucifixion.  The stories that happen after his resurrection seem kind of tacked onto the end.

But even if this period of Christ’s life doesn’t get a whole lot of attention from the gospel writers – it is a pretty significant for those of us who follow Jesus.  Christ, after all, has just returned from a place that no one has ever returned from before (or since as far as we know).  He has been dead for three days, and now he is alive again.  Really?  If this is true – as we Christians say it is – and Jesus has something to say during this second time around, then we better sit up straight and listen up!

In today’s story, Jesus appears to the disciples on the shores of the Sea of Tiberius.  According to the story, Simon Peter had said “I’m going to go fishing” and the others quickly agreed, and off they went.  It was night time when they went, and they didn’t have much luck – in fact they didn’t catch anything in their nets.  When day broke, Jesus appeared on the shore, but they didn’t recognize him.  He told them to go out and cast their nets again, and – lo and behold – they caught a bunch of fish – 153, in fact.  There is a kind of comical moment in the story, when the disciples, whio are hauling up their nets, suddenly recognize Jesus, and one of them – Simon Peter – had to quickly put some clothes on, because he, for some strange reason, was naked!  They return to shore, where Jesus has a fire ready for them, and he says: come and have some breakfast.  It is at this point that the strange dialogue ensues between Jesus and Simon Peter that makes up the majority of today’s reading.

And how normal it is…

It’s odd that it’s so… normal…

You know what I mean?

Imagine you knew someone who died and came back to life again…  Wouldn’t you be curious?  Wouldn’t you want to know a little bit about what it was like to be dead?

I don’t know about you, but if I met Jesus on the shore of the sea of Tiberius, I would have a whole list of questions for him…

Or was it wonderful?

These are eternal questions that we humans have never known the answer to.

Here is our one chance to find out!

But none of the disciples bother to ask these questions.

And what about Jesus.  Wouldn’t he want to relay a message maybe?

Might not he be eager to fill us in a bit on the nature of the Divine?  Presumably – at least this is what we assume to be true – when he was dead, Jesus was in closer proximity to the ultimate than he was when he was alive.  Wouldn’t this subject be the first item on his agenda?

That’s what I would think.

The disciples get a handful of chances to talk to the Messiah himself – the son of God – who has died and resurrected, and instead of taking advantage of this once-in-human-history opportunity to get the answers to all of the eternal mysteries that plague the human condition…

they are sit around on the beach,

and eat some breakfast…

I want to tell you a story…

This story is not from my life, but from the life of man I admire above all others.

I have paraphrased this story from the pages of the book Mountains Beyond Mountains – the story of Paul Farmer as told by the Pulitzer prize winning author, Tracy Kidder.

As a young man – before he decided to become a medical Doctor – Paul Farmer spent some time volunteering in a hospital in Haiti.

While he was there he met a young American doctor who was about to go back to the US.

Farmer, who was already being transformed by his experience doing medical volunteering among the poor of Haiti, asked the doctor how he felt about leaving Haiti and returning to the US.

“But aren’t you worried about not being able to forget all this? There’s so much disease here.

Later that night a young woman arrived at the hospital  helping her pregnant sister.  The pregnant woman was in trauma.  She was suffering with a serious case of malaria.  The doctor diagnosed the problem and proclaimed that she needed a transfusion.

But there was no blood available at the hospital.

There was blood – but it was at a hospital in Port au Prince.  The sister would go for blood, but she had no money.  Meanwhile her pregnant sister went into a coma.  Paul Farmer ran around the hospital raising money, and managed to scrounge up $15 dollars, which the sister took and left, only to return shortly afterward.  $15 would get her to Port au Prince, but she would not have enough left over to buy the blood.  Paul and the sister watched in agony as the young pregnant woman, and the unborn child died.

In the aftermath of the death, the sister said:

“If you are poor, you cannot get a blood transfusion.  This is terrible.  We are all human.”

We are all human.

The sister’s words sank into Paul Farmer.  He decided he could just get back on a plane and go back to America.

He could not leave the poor behind to to suffer and die needlessly.

Paul Farmer’s life became an insistence.  An insistence that poor people should not be left to die, simply because they are poor.

Why should poor Haitians die every day from treatable conditions that middle class Americans had no problem surviving?

The reason – the obvious, and entirely unacceptable answer to this question was that, because of the mechanisms of globalism and the maldistribution of wealth, the middle class Americans – simply by virtue of the accident of birth – is given more value than the poor Haitian.

This, he found intolerable.

Farmer flew home, but he never left Haiti behind.  He returned.  He raised money to create a blood bank in the hospital where the pregnant woman died.  Eventually, he, and Partners in Health – the organization he founded – built a world class medical clinic in central Haiti – one of the most impoverished areas in the world.

He did not tell Simon Peter about the radiant face of God, or the flashing wings of seraphim.

He might have been able to do so, but he didn’t.

So what did he do?

He did something far more important.

He told Simon Peter to do something.

He told him, not once, but three times.

Jesus returned to tell us one thing.  God sent him back to tell us this, and Jesus told it to us three times…

Care for the poor.

Tend to the sick.

Could it be more clearly stated?

Love and care for those who suffer.