This Palm Sunday Sermon is dedicated, in loving memory, to my teacher and mentor Thomas Troeger, who died last Sunday April 3rd, 2022.  You can listen to the sermon, if you wish, by clicking on the play button below. 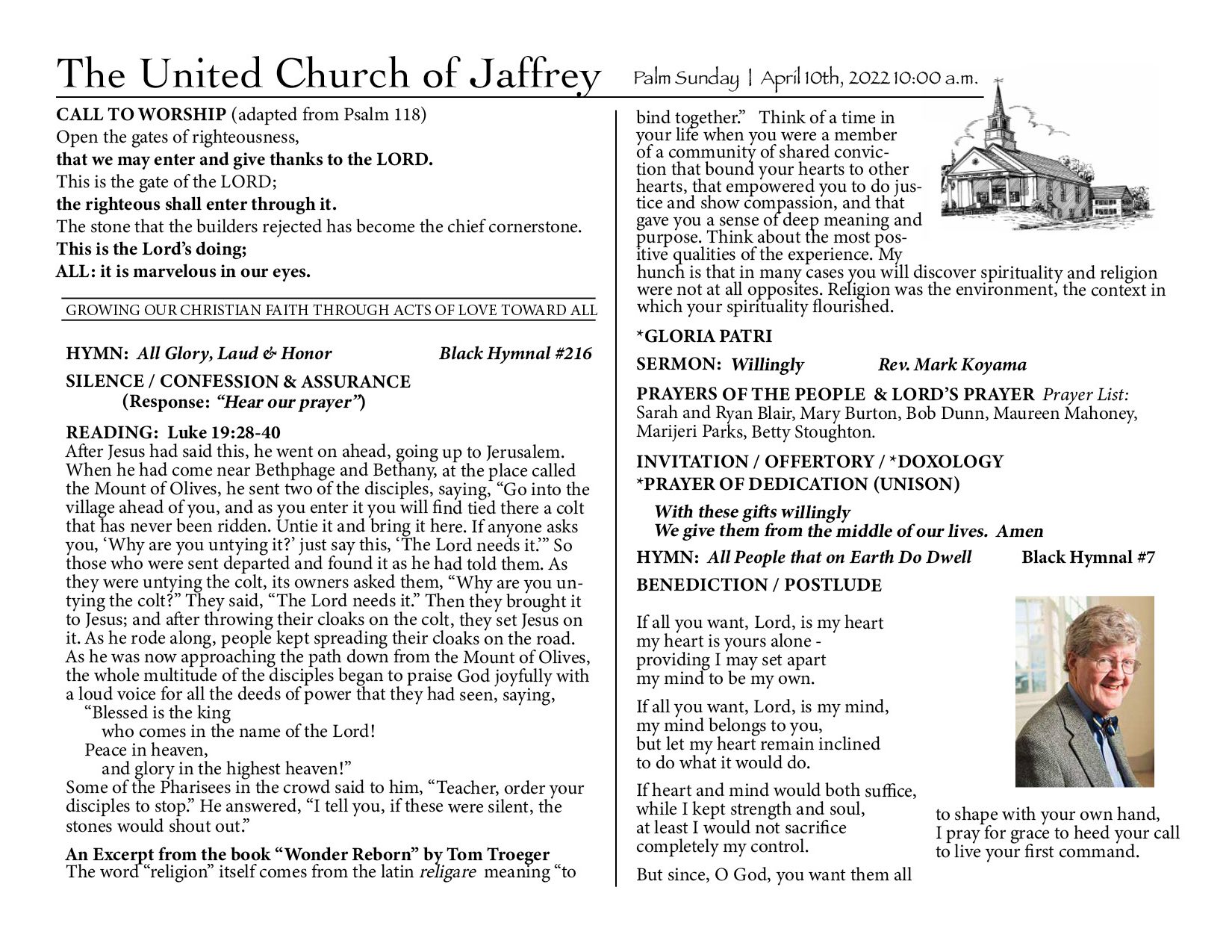 It is still morning.

I tie the colt at the post and, turning to go back in, I catch a glimpse of them coming down the road under the trees.

Even from a distance I can see that they are strangers.  I do not know them.

But I paid no heed – it is not an unusual thing to see wayfarers who, like us, plan to cover as many miles as possible before getting caught outside in the heat of the day.

I head back inside for the baskets, passing Rachael in the doorway.

But before I can gather the second basket, I hear a sharp cry of distress.  It is Rachael.  Dropping my load and running out front, I find her outside of the fence holding the colt’s head in her arms, trying to calm him.

The two men, seeing me, back away.

“Thieves,” she says, struggling for breath…  “They were…”

“Why are you untying the colt?” I asked in a tense voice.

The men look at me and then they turn to each other.

In the moment that has elapsed, Rachael has managed to get the colt back into the fence.

He is agitated.  It was to be his first trip to market.  And now this…

When, in the middle of life, I found myself in a dark wood…

I thought I heard a call to the ministry.

So I spent several months writing the personal statement for my applications to Div. a School.

I was trying to discover myself.  Was God there?  There was a mystery… could the mystery help me make sense of my past… move into the my future.

I wrote, and I walked…

And I walked, and I wrote

And for months I ate, slept, walked and lived the personal statement for that application

There were, I think, more than 20 drafts of that thing.

I got into Harvard Divinity School

What was I going to do?

To be sure, it was a good dilemma to be in – but a dilemma nonetheless.

I went to see both schools.

Until I heard Tom Troeger preach.

When I heard the homiletics professor at Yale Divinity School preach, I knew where I wanted to study.

I wanted to study with Tom.

I hold the colt’s head in my arms, trying to keep his eyes on me.

A child still.  Hush.  A child with hooves.  He barely knows the feeling of a burden.

He does not know this world.  This world of thieves.

“We are not thieves,” one of the men says.

“Why then,” my husband asks, “were you untying Khathan?”

One of the men raises both of his hands, palms up, to his sides.

The colt shudders.  He sputters, and his trembling begins to ease…

And this man’s voice is not that voice.

“And who is this LORD of yours?” my husband.  “Is he my LORD too, that I should let you take my Colt?”

On one particular day, in the homiletics class presided over by Tom Troeger and his co-teacher, Nora Tubbs Tisdale, we listened to the story of the paralyzed man in the fifth chapter of Luke’s gospel

…some men came, carrying a paralyzed man on a bed. They were trying to bring him in and lay him before Jesus; but finding no way to bring him in because of the crowd, they went up on the roof and let him down with his bed through the tiles into the middle of the crowd in front of Jesus. When he saw their faith, he said, “Friend, your sins are forgiven you.”

Students were then asked to place themselves into the mind of one of the characters in this story.  We were asked to describe the smells, the sights, the sounds.  How might the paralyzed man experience the jostle of the crowd?  With what grunting, indomitable striving, did the men succeed, at last in lifting their friend up onto the roof?

These are the negative spaces in this narrative that ache to be filled in.  Filled in by the imagination.

And what, in turn, does the imagination of the human soul bring to God, in such a narrative?

What does God bring to us?

What nuance of faith is discovered when we place our souls into the story?

We spent the night near Bethany, at the place called the Mount of Olives, and before dawn, our LORD woke us – we two – and took us out under the stars…

“You two must leave soon,” he said, “for what I ask will take you some time, and we must enter Jerusalem today.”

He pointed out into the darkness. “Go into the village ahead of you, and as you enter it you will find tied there a colt that has never been ridden. Untie it and bring it here.”

As we walked down off the mount, the light grew, working its way gently among the gnarled limbs of the olive trees.  We were aware, both of us, of the distance that was growing, between us, and our beloved teacher.

How can we do this thing? we asked.

It is not a simple thing, this taking of a colt. We complained.
A colt that has never been ridden?  Really?

Such an animal is precious to its owner.

Who gives away such an animal?

And somewhere beyond the bend in the dusty road, the day broke.

Tom Troeger gave me the liberty to approach preaching as an act of the imagination. The pulpit, in his classroom, was not a place where the monumental was established – it was, rather, a place of discovery – a place where each generation came with their whole beings to plumb the depths of beauty and pain.

As I write this sermon, I struggle with the difficult implications that my imagination has led me to.

I am aware, now, Tom – that our story requires this young couple to give up their colt.

And I am aware that this is a great loss for them – that for any villager on the outskirts of Jerusalem in the first century AD,  a young donkey would have been a matter of great significance – a crucial part of their livelyhood.

I am aware, Tom, that at every turn, this is a hard tale.  Even for our young colt – a skittish and inexperienced youngster – this will be a hard day, surrounded by crowds of people shaking palms and singing Hosannas.

Is it okay to play with scripture in this way?  There is no Biblical reality to my fictional characters – I have imagined them from what we know.  Can our imaginations – as a community, bring life to this old story?  And if so, can our community become beloved?  Become a community inspired by the moral  imagination?  The imagination of love?

What do we know?

We know that someone lost their prized young donkey that day.  We know, that in an agrarian culture, that knew, intimately, the value of a young animal, this was a great sacrifice.

And so we know…

We know that each person in this story – the owners of the colt – whoever they may have been; the disciples; and even the young colt himself, were willing to respond to a need.

So when our imagination places us within this story what do we achieve?

We achieve a movement.

We are moved, from

“The Lord needs it…”

“The Lord needs me.”

We do not know how the LORD will call us, but maybe – as in this story – the Lord will call us in the middle of our lives.

I don’t mean middle-age, necessarily…  I mean, in the middle of our lives – where it counts.

“The Lord needs me,” than, is a cause for Hosanna, because we can meet that need – but it is cause, also, for sacrifice, because meeting that need may not be easy.

Responding to “the Lord needs me” may make life harder.

It may make life, literally, more of a burden.

But is this not exactly what we do….?

Exactly what we do for the sake of Love?

And we give it… willingly.

The Rev. Dr Thomas H. Troeger died on April 3rd – the sixth Sunday of Lent.  He was a teacher who opened my imagination to God, and this Palm Sunday sermon is dedicated, with love, to his memory.