If you would like to hear this sermon as preached from the pulpit, please press the play button below:

You know it’s early Spring when you discover, with a little heart-leap of joy, that the drip drip you are hearing is the sound of snow melting from the roof and falling from the eaves.

You know its late spring when the dog gives up her winter spot in front of the wood stove and settles down in the backyard in the shade of the lilac.

You know that its summer when, wandering into the back porch, you you hear the little thump-thump of a yellowjacket bumping up against the screen.

These are some things that you know.

You know that it is mid-summer when you hear the melody of the ice cream truck floating over the afternoon din of the housing projects.

You know its mid-summer when old Dominican men sit on the stoops playing dominoes.

You know its mid-summer when the guys in the neighborhood gather for pickup games on the basketball court in the park.

You know its midsummer when the metal gratings on the sidewalks release sudden gusts on dank hot air as the subways thunder past beneath your feet.

These are some things that you know.

Or maybe you don’t.

These are things you might not know unless, at one time or another, you lived in New York City.

You do know these things don’t you?

Even if you never lived in New York City…

You know these things anyway.

When you hear these things, you recognize in them a kind of vitality, a truth that makes it seems like you have known them all along. 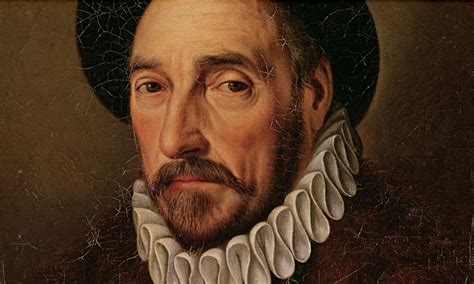 Michel De Montaigne, a French nobleman who lived in the 16th century, was one of those guys who has a tendency to digress.

You know who I’m talking about?

In your life it could be an uncle, or a neighbor, or someone, maybe, in the next pew.

Montaigne is remembered today, almost 500 years after his death,  because he wrote a lot.  Which is to say, he digressed a lot.  His essays were about this and that, but inevitably they became about him.  “I am myself the matter of my book” he once wrote.

This inclination was not kindly looked upon at the time, so it was not until much later that Montaigne’s influence was acknowledged.  His essays, which linked personal story with philosophical inquiry, were recognized as the beginning of a literary genre called the “personal essay.”

“Every man has within him the entire human condition,” Montaigne wrote.

I wish he’d written “Every man and woman has within him or herself, the entire human condition.”

It wouldn’t have been as pithy, but it would have been more universal – which is the whole point, right?

Back then, of course, the word “men” was supposed to encompass all people regardless of gender.

It was just this “supposed to” quality that allowed men to ignore the contributions of women for generations and generations.

Besides, Montaigne made the same point later, in a more colorful, and totally gender-neutral way when he wrote:

“On the loftiest throne in the whole world, we are still sitting on our own rump.”

I tell my literature students that this principle – that each human contains that entire human condition, is the central principle that makes story critically important to human life.

The vital lessons of human life move from generation to generation through the medium of story.

And story is the ideal vehicle for human learning, precisely for this reason – because through story we can make the move from the particular to the universal.

We recognize vital truths even when they are outside our experience.

Even if you have never lived in New York City, you can recognize the truth of the person who has never lived anywhere else.

Why?  Because, somehow, in some mysterious way, we contain each other’s truths.

You recognize truth of that little “thumpthump” of the yellowjacket, struggling for its life against the backporch screen.

You recognize the old Dominican men playing dominoes in the summertime.

These evocations – these telling details that are the small evidences of our shared life.

This morning’s gospel reading, from the 24th chapter of Luke, are the concluding verses of Luke’s gospel.

Here Jesus makes his final post-resurrection appearance to his disciples.  They have one final conference in which he briefly instructs them, and then he moves away from them, and ascends into heaven.

Does the principle of universality in story that Montaigne just helped me describe shed any light on this story?

At first things do not look very promising.

None of us have had the experience of dying and being resurrected.

None of us can say that we have ascended up to heaven.

So this business of recognizing the universality of this story is a bit challenging.

Recall that Montaigne said that each human contains all of the human condition.

He said nothing about the Divine condition.

We know about the human condition… it’s what we know.  So we can build story around it, and feel the experience of recognition.

But we do not know about the Divine Condition.

It is what we do not know.

Indeed, one of the pressing realities of the Human condition – something that we can all identify with – is that God is a mystery.

The Divine is not something that can be easily defined.

And this, perhaps, is something that is unique, and perhaps a little disorienting about the New Testament.

But this passage does not only concern the Divine condition.  It also concerns things human.

In these verses Jesus connects the dots for the disciples for the last time, telling the disciples that recent dramatic events – Jesus’ suffering, dying, and rising again – were not just any series of things that happened.  They were no less than the fulfillment of Jewish prophecy.

Then, as if this was not a big enough deal by itself, Jesus says something even more dramatic:

“Thus it is written, that the Messiah is to suffer and to rise from the dead on the third day, and that repentance and forgiveness of sins is to be proclaimed in his name to all nations…

Jesus fulfills Jewish prophecy, but the forgiveness that he offers is for for all nations

This move, from Jesus as a Jewish messiah, to Jesus as messiah for all nations was a conclusion that Luke’s gospel was particularly concerned to make.

And this move is achieved with Christ’s next words:

“You are the witnesses of these things.”

Since the disciples are part of this story, and they are human entirely, we can find our way, in this story, to the universality of their experience.

When Jesus tells the disciples “You are witnesses of these things”…

To witness, is not just to see something.

We see things all the time.

Witnessing something is far more rare.

To witness something is to understand the value of that thing, and accept the fact that the thing that you witness is so important that it places a moral obligation upon you.

With this idea of witness, we move to another level of engagement with the story.

We do not simply recognize its universality.

We participate in its universality.