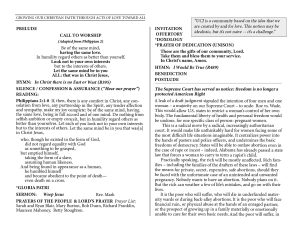 And while we’re at it, let’s send another shout out to all of you who have mothers…

In other words – everyone.

A hearty and warm Mother’s Day shout out to all of you, my dear UCJ family, for all the ways that you have been, or have been influenced by, that greatest of quality of humanness that we know as “motherhood.”

Not all mothers are saints – it’s true – and yet, no matter how problematic any particular mother might be, it cannot be disputed that, for want of our mothers none of us would even be here!

Our very existence as a species depends upon our mothers, and so, it is only right that we should honor them with all of our hearts…

That said, it must also be acknowledged that mother’s day, this year feels painfully ironic.

This year, mother’s day arrives at a bitter moment in our history… a moment in which women are not being honored.

It might be more accurate to say that, on this Mother’s Day, women are being dishonored.

On this day, set aside to honor mothers, mothers across the country are being confronted with a new and hard reality…

the ultimate affront to their dignity…

A decision has been made, by the highest court in the land, that, if it becomes law, will mean that no woman of child-bearing age, in this nation, will have the legal right to control what happens to their own bodies.

How could this happen?

How could the so-called “land of the free” – for so we claim to be – create a law that restricts a specific group of people – in this case, pregnant women – from their most basic freedom – the freedom to decide what happens to their own bodies?

The reason, of course, is because abortion is an extremely complex moral issue – one that does not submit easily to a single resolution.

While it is undeniably true that restricting access to abortion limits a woman’s ability to control her own body – it is also undeniably true that the decision to terminate an unborn child is devastating.  This decision cannot be made lightly.  Even the most hardened person is aware of the profound moral and spiritual consequences of such a choice.

Religion inevitably wanders into the fray of this painful argument, because whenever we humans attempt to understand the mystery of the divine, it is not long before we affirm that, at the most basic level, life itself is sacred.

In the three world religions that trace their lineage to Abraham – that is, Judaism, Christianity, and Islam – this affirmation follows directly from the creation of the human creature, who, in the book of Genesis, is formed from the earth, given the breath of life and proclaimed to be made in the image of God.

Though I am a Christian minister, you all know (unless you have just wandered in from the street) that I am not a terribly dogmatic fellow.  I won’t turn you out of this church if we share different views on God.  If, however,  there is one article of faith to which I abide – and return to almost every Sunday – it is the belief that each human being is created in the image of God – that is – each human, by virtue of the gift of life – has inherited a sacredness that God has placed in their souls.

From this central assertion of life’s sacredness, many people of faith judge that abortion is necessarily a sin against God.  There can be no doubt that this pious reflex has, in no small measure, brought us to the critical juncture where we now find ourselves today.

For my part, I believe it is possible to affirm the essential sacredness of life, and at the same time insist that the secular laws established by our government keep their hands off the bodies of women.

For what it’s worth, I think it is possible to make this argument, and base it on scripture.

I say “For what it’s worth” because, of course, scripture can certainly be used to support the other side of this argument.  Since the Bible is capacious enough to unapologetically contain all of the myriad impulses of human passion as it reaches, clumsily, toward the divine, Scripture (which is notoriously pliant to the will of interpreters) has been used quite effectively to justify all manner of evils – slavery and genocide among them.

In like manner, there are scriptural passages readily available to justify the criminalization of abortion.

Surely the freedom to determine the destiny of one’s own body in the world is part of what makes life itself sacred.  To be deprived of that freedom is to live in bondage.  A spiritual as well as a physical bondage.

On Saturday morning I received an email from a friend who lives in Kingston New York… and in the body of the email was a letter written by her minister, Rev. Bob Janis-Dillon of the Unitarian Universalist Congregation of the Catskills.  Typically, I am careful what I read on Saturday mornings because I am concerned to keep my impressions and intuitions fresh from external influence before I dive into my sermon – but I made an exception yesterday, and I’m glad I did.  Rev. Janis-Dillon’s words ring with moral authority.  I was so impressed, I decided to copy the majority of his letter into the bulletin for your edification.  I am tempted to simply cede the floor to him.

I am a little ashamed to admit that it was not until I read Rev. Janis-Dillon’s letter that I became fully aware of the disproportionate effect that a reversal of Roe will have on the poor, and this in turn led me, as it always does, to summon into my mind, and into my heart, the expansive compassion of Jesus.

I remembered that when Jesus came to town, he walked among the poor and the sick.  He shared tables with all manner of people, entirely heedless of what the powerful religious leaders of the time thought of him.  He was not interested in power.  He was not motivated by consolidating his influence or maintaining appearances.  None of the calculations of personal ambition touched him.

He was interested in love – and his love was not just spoken – it was lived.  It was not enacted.  It was acted.  Christ’s love was not an edict, or an “opinion.”  It happened on the dusty roads of Galilee, on the hillsides, and on the shores of the sea of Tiberius, where the poor cast their nets into the water.

As Reverend Janis-Dillon points out, the men and women of the Supreme Court are not with us on the dusty roads.  This decision will not touch them.  If one of their grand daughters is raped, their money will insure that their grand daughter will enjoy a safe, clean, expensive, and illegal abortion.  Money can achieve all that, and keep things quiet to boot.  This irony is made possible by the entrenched inequities of our class system, and by the blatant cynicism of a Supreme Court led not by compassion or fairness but by the reflexes of power, ideology and self-interest.

Yes, Lord… It will be your beloved poor people who will suffer.

If the 14 year old child raped by her uncle carries her child to term, as she will be compelled by law to do, she will live all of her days in sacrificial subservience to that cataclysm of violence that destroyed her life.

For it is the poor women – the ones you healed, the ones you taught… who will die in back alleys – not at the hands of rapists or murders, but because the laws of our land put them there.

A reversal of Roe will not stop abortions.  It will stop safe abortions.

Yet again, the poor will die.

Yet again, the poor will suffer because of the heedless, flailing hubris of the powerful.

Jesus, did you call yourself “supreme?”

Jesus, did you require us to build a massive neoclassical edifice for you, with sixteen Corinthian columns?

What did you do Jesus?

In the words of St. Paul, in his letter to the Philippians,

did not regard equality with God

as something to be grasped,

But you emptied yourself,

taking the form of a slave,

And being found in appearance as a human,

and became obedient to the point of death—

even death on a cross.

He did not impose power

He lived, and died in compassionate solidarity.

The legacy of his life and teaching should not be pious reflex that leads to thoughtless judgment.

We must not allow the story of our beloved Jesus to be used  as a blunt instrument – to be co-opted to justify an impersonal and artificially imposed legalism that willfully ignores the violent reality that confronts all women.

Is to act in love and insist, insist that they be govern the most basic form of respect – the agency to control their own bodies – their own destinies.

This is not naive…

It is a challenge…

A challenge for every woman