On the other side of the river, where the bridge meets the embankment, there’s a break in the trees where it is possible to look out across the long ploughed field a line of distant trees.  In the same spot, coincidentally (or perhaps not so coincidentally) there is a place where, if one were so inclined, one could shimmy under the fence.  It’s clear, at least, from the way the ground is eroded, that such shimmying has been done in that spot. I’ve been walking past the spot for years without doing the shimmy.

The other day I did the shimmy.

Luna, the dog, was reluctant to follow me.  She is a creature of habit who prefers to follow the route prescribed by the bike path’s clean asphalt, and since I have observed this same MO during the Luna years, she was rightly suspicious of this turn of events.  With a little coaxing, though, she complied, and before long we found ourselves walking the margin between the Connecticut River, on one side, and a wide ploughed field on the other.

If, like Luna, you are wondering what possessed me to finally do the shimmy — to stray from the beaten path, and wander out into the field — I believe I can offer a theory.

For years I’d been feeling the faint tug of that distant line of trees — a whisper that beckoned me across the long field.  But my conscious mind easily dismissed that ridiculous fancy.  What good would it do to walk over there?  Once I was there, the trees would be just like these ones I’m standing under.

The reason I finally did the shimmy and wandered away across the field, was because a few days before — on Earth Day Sunday — I’d made a video for you folks in which I’d shared one of my favorite poems — a poem called The Peninsula by Seamus Heaney — and when I looked out over the field that day, I was still under the sway of that poem.  And because of this, I understood for the first time the call of those distant trees. 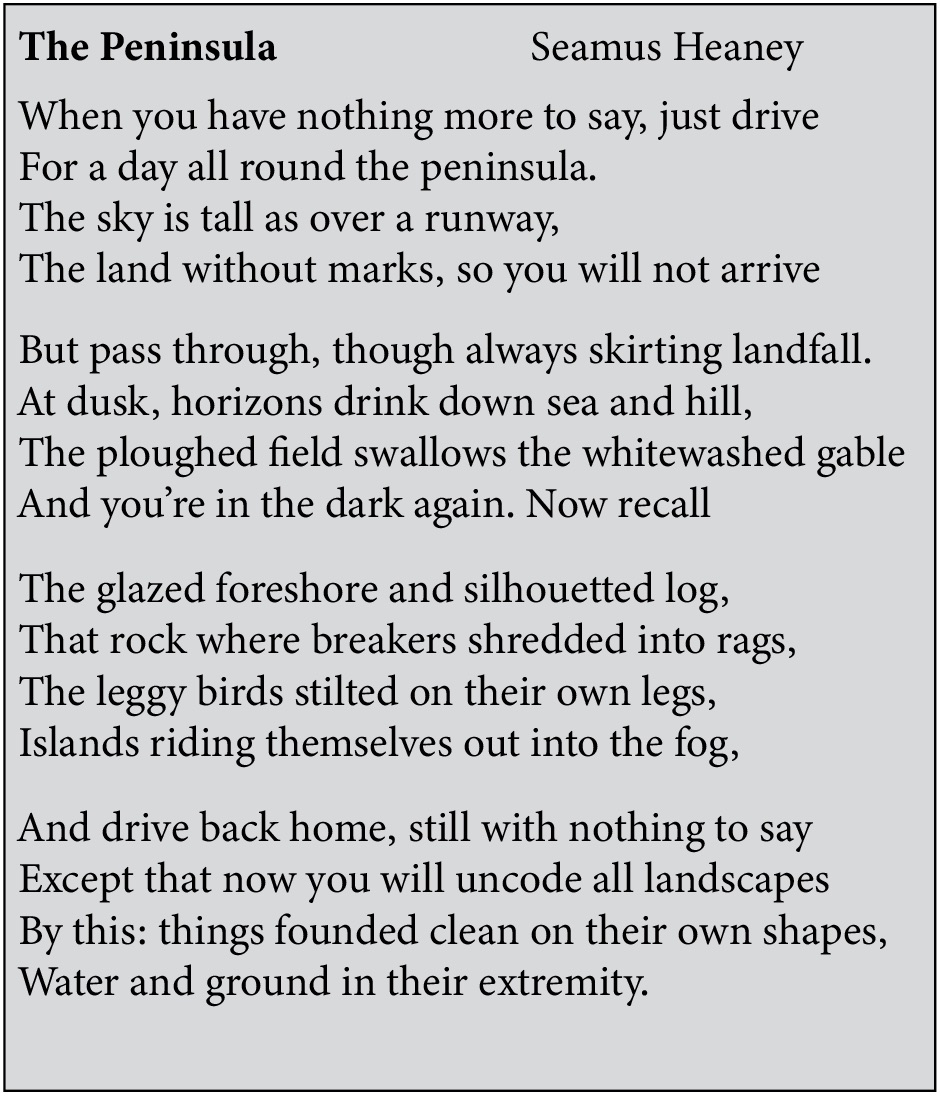 In the poem, which is printed for you on the second page of the bulletin, the poet portrays the wide expanse of distance that you find driving on a peninsula, where the sky is “tall as over a runway,” “the land without marks” that is “always skirting landfall..”  He tells of the “ploughed field,” of the “glazed foreshore and silhouetted log,” the “islands riding themselves out into the fog,” — and the day spent in within of all this distance, all this generous expanse, gives Seamus Heaney a quiet gift — a new kind of perception with which to “uncode all landscapes” — “things founded clean on their own shapes”

“things founded clean on their own shapes”

I wanted to be out in the open…

to let the dog off the leash

away from the paved road.

I wanted to get out under the tall sky…

To walk to the far trees

For no reason, but to get to

the far end of the ploughed field

And look back at where I’d come.

Another poet — William Carlos Williams, in a poem called “Asphodel”  that

“It is difficult to get the news from poems yet men die miserably every day for lack of what is found there.”

I’ve always loved this quote, because I love poetry, but I’ve only recently begun to actually believe it to be true.

The news informs us of what we don’t know,

Poetry opens us to possibility

Facts are convenient — we can relegate them to the appropriate file folder in the proper filing cabinet — a process that is entirely rational, satisfactory and complete.

But after poetry opens the file cabinet, we are left standing in front of it, unable to properly file the meaning.

Poetry defies the rational mind.  Like religion, it scratches at the surface of mystery, and leaves us open.

Open to the possibility of being transformed.

Another poet — Wallace Stevens, gave us a famous poem in which he enumerated 13 different ways of looking at a Blackbird.

One of the ways — the fifth way, in fact, goes like this:

I do not know which to prefer,

The beauty of inflections

Or the beauty of innuendoes,

The poet does not know which to prefer.

To me, the blackbird is the poet

The blackbirds song, is the poem

And the moment just after the blackbird’s song, is the moment that I shimmied under that fence.

Poetry speaks and becomes real in our lives.

I agree with Wallace Stevens.  I too am gloriously confused.  I don’t know which to prefer.  All three contain, or point to,

You may be wondering, by now, if you’ve wandered into a seminar about poetry instead of a church.

Especially the religion that was founded around the Blackbird Jesus Christ, who said:

I am the true vine, and my father is the vinegrower.

This is not a headline.  It doesn’t sound like a news story.  This statement does not inform us — it opens us, through metaphor, to a relationship.

Cleansed by the word!

Now there’s a teaching to make a retired librarian happy!   Jump in the shower to clean your body, but if you want to clean your soul, head down to the library and seek out the good word…

Abide in me as I abide in you.

Just as the branch cannot bear fruit by itself

Unless it abides in the vine

Neither can you unless you abide in me.

This is the blackbird’s song.  The inflection of the song is:

And after the blackbird is done singing, we are left to make sense, if we can of the beauty — the mystery, left behind.

“God is love,” it says “and those who abide in love abide in God, and God abides in them.”

In the summer of 2016 the search committee for the new settled pastor for the United Church of Jaffrey invited me to come to Jaffrey — and in their infinite wisdom, the first thing they scheduled for me to do, was take a tour of the town.  I climbed into a car with a whole crew of church ladies…  I was both charmed and a little frightened.

We drove into town and took a left at the Rite Aid, went down by the old match factory, and swung by Coll’s farm, and then up the hill and over past Liz’s and the Amos Fortune homestead.  We went up the back way to Jaffrey center, making a big loop.  Everyone was telling me about the things we were driving past — and the whole time I was just doing everything that I could think of that my mother taught me about how to be a polite young man.

I think I must have succeeded, because after it was all over, and we were back at the church, and the interview itself was done, one of my tour guides — a lovely person who had, at one time, worked in the nearby library — showed me around the church itself, in a way that was filled with a great love and reverence.

It was almost dark when we walked out of the crash door.  I think everyone else had left.  The retired librarian stopped right there between the church and the parish hall — right about where the great pothole is, and she turned to me and asked:

“Yes” I said.  I had been opened.  Opened to the possibility of love…

I shimmied under the fence…

And I never turned back.