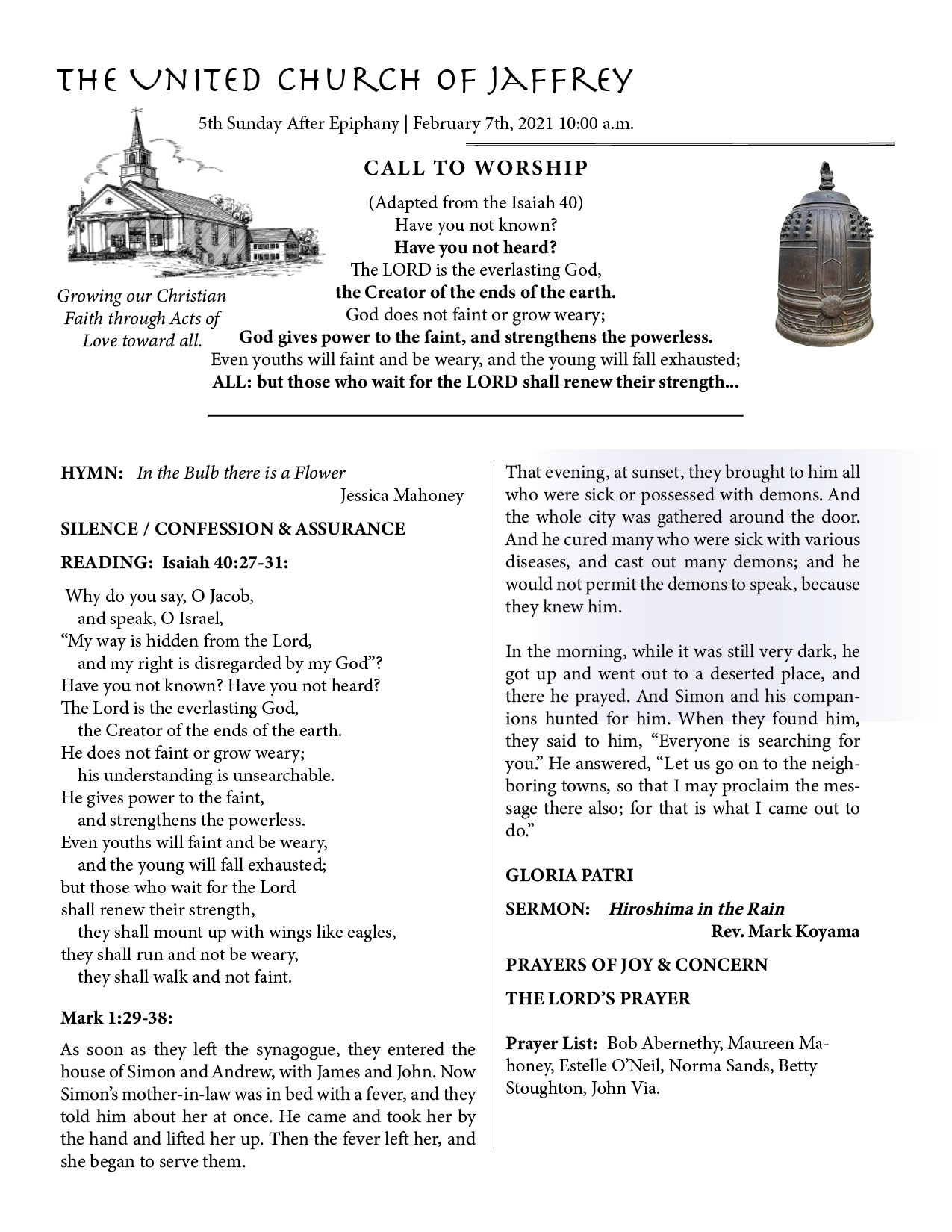 Late June is the rainy season in Japan.

Hiroshima in the rain.

We opened our umbrellas and hurried into the morning rain.  Commuters were dashing from awning to awning, their shoulders hunched against the downpour.  After a couple blocks, we crossed over the Ota river onto the area of land above which, 64 years before, the atomic bomb exploded.

We were not long in the park before we came upon a mound set within a circle of trees.  The mound was carefully shaped – it looked like a pagoda, but it was only a bit taller than a person, and it was covered with grass.  A circle of sand surrounded it, and finally, on the extreme periphery, a low wooden fence.

A sign, placed there by the Hiroshima Memorial Service Association explained the history of the mound in Japanese and English.  On this spot, during the weeks that followed the bombing, an immense pile of unclaimed dead collected. These bodies, too disfigured to be recognized, or with no living relatives to claim them, were cremated here.  In 1946, in the first year after the bombing, a makeshift tomb was built, using funds donated by the citizens of Hiroshima.  The place became known as the repository for the ashes of the unknown dead and so people from all over Hiroshima delivered ashes to the tomb.  The ashes of up to 70 thousand dead from all over Hiroshima came to rest in the vault, and in 1955, ten years after the bombing, the makeshift tomb was replaced by the present mound.

The rain let up a little bit.  In the near distance an old woman stood up and began moving about.

How strange it seemed!

Could such a horrific scene have taken place in this serene place?  From this vantage, the park looked like any other well-maintained municipal park, with paths meandering through widely spaced trees, wrought iron fences, park benches, patches of grass and, here and there, the wide expanses of asphalt where children gather to play on the long summer afternoons.

Let us turn, now to scripture.   This morning, that I want to look at both the Old Testament passage from the book of Isaiah, and the gospel lesson from the first chapter of Mark.

First, the passage from Isaiah – one that is filled with rhetorical questions, admonitions, and assertions.  Characteristic of prophetic literature, the language is both personal and lofty.

Israel, an entire nation, is spoken too almost like a child being scolded.

Why do you say, O Jacob,

“My way is hidden from the Lord,

and my right is disregarded by my God”?

The Lord is the everlasting God,

the Creator of the ends of the earth.

The prophet is making the argument from power!

Have you not known?

Have you not heard?

The Lord is the everlasting God

The creator of the ends of the earth

And yet, according to Isaiah, God is not some distant, uninterested power…

God is a source of power for us.  God is willing to share

God does not faint or grow weary; Isaiah proclaims…

He gives power to the faint,

and strengthens the powerless.

The prophet Isaiah lived and prophesied during a time in the history of Israel, when the area was constantly under military threat.

The geopolitical reality that has always shaped the history of Israel, even to this day – is the reality that Israel is located between larger, and more powerful empires – in particular, Assyria and Babylon in the East, Egypt to the southwest, Greece and Macedonia to the north, and eventually of course, Rome, to the west.

it was natural that they characterize these powers – Assyria, Babylon, Egypt, Greece and Rome – as instruments of that power.

When Isaiah, and other prophets, threatened God’s vengeance for the sins of Israel…

These threats were expressed in the geopolitical realities of the day.

When, on the other hand, God was pleased with Israel’s expression of faith, God would provide the assurance of an almost militaristic prowess:

those who wait for the Lord

shall renew their strength,

they shall run and not be weary,

they shall walk and not faint.

In this way, the actions of ordinary people – the faithfulness of people like you and me, had repercussions that spanned across continents.

Be good and we will be protected.

Sin, and vengeance is swift.

Hiroshima entered the twentieth century riding an economic boom created by militaristic zeal.  Because of its strategic position near the outlet of Japan’s inland sea, Hiroshima was an important stage of operations, providing troops, provisions, and ammunition to serve Japan’s imperialist ambitions.  Great warships were built here.  Young conscripts from all over the land converged here to set forth on their glorious mission to bring all of Asia into Japan’s “sphere of prosperity!”  Here amidst the marching soldiers, the pomp of the proud military music, and the strident shouting of orders, Japan’s destiny as a world power seemed most assuredly true.  Hiroshima was an entire city focused on the exciting possibilities offered by military aggression.  A city suffused with the zeitgeist of power.

The atomic bombing was the most destructive instant in human history.  A new and mysterious power that had never before been seen, was unleashed.  70 thousand people perished almost instantly, and thousands more died later of the effects.

And in that instant – 8:14 AM on August 6th, 1945, Hiroshima was transformed, not only into a wasteland, but also in its spirit – its soul.  Hiroshima the proud city defined by militaristic zeal, became a place whose name is synonymous with the hope of peace.

Today, the word “peace” is everywhere in Hiroshima.  Every monument looks backwards at the bomb, and forward toward a hope for peace.

The modern city, rebuilt from ashes, seems to stand as a reproach to its former sins…

And standing beside the memorial mound in the rain, I too felt the earnest hope for peace.  I thought about the people of Hiroshima, in the aftermath of the terrible cataclysm, collecting the ashes of the unknown in this sad place.

It was such a touching act.

This simple insistence that these dead – whoever they were – should be given some kind of honor – even if it was the dubious honor of being mixed together into a mound.  It seemed to speak quietly to me, of a kind of dignity – an affirmation, in the middle of the devastation, that even these drab ashen remains, are sacred, because they hold within them the memory of a human soul.

The rain let up a bit, when we turned to go.

In contrast to Isaiah’s soaring rhetoric, this morning’s gospel lesson from Mark’s first chapter, is a quiet, simple little story.

After a long day, Jesus and his friends go to the house of Simon and Andrew to rest.  Simon’s mother-in-law, who was in this house, was suffering from a fever, and in a lovely moment that passes almost before we are aware of it, we catch a glimpse of our beloved friend Jesus taking an old lady by the hand and helping her up.  Her fever also lifts from her, and she humbly resumes her work around the house.

Though they have had a long day, Jesus and his disciples are not left alone.  People have heard of this Jesus.  A new and mysterious power had come among them – a power that could summon love and bestow it with a touch.  A power to drive away demons and heal anyone who came near…

And so they came.  The lesson tells us that the “whole city was gathered around the door…”

Here, in this backwater…

This place trodden over, time and again, by the larger empires that surrounded it…

Here, in the last place on earth that one might expect…

Comes the presence of a great power.

The power to reach out and heal.

And this place – this Galilee – was transformed, like those people, in body and soul, to a place of healing for all nations.

A place of hope.

A place of peace.

I don’t like to think of a God who uses the military force of an enemy as a punishment.

I cannot imagine worshipping a God who would take part in a Babylonian invasion of Israel, or steady the hand of the pilot of the Enola Gay…

I am not saying that these things did not happen, or that such awful realities do not exist in the world…. But if I am asked to worship a God, and create a community around that worship — I do not want to do so in fear of vengeance…

Soon after we wandered away from the memorial mound, we came upon a bell – a very large traditional Japanese bell – like the one you see pictured at the top of your bulletin this morning.

This is the Hiroshima Peace bell.

The clapper for this bell is not on the inside, like a church bell – it is a long horizontal piece of wood that is suspended on the outside of the bell.   To ring the bell, you pull from the wooden clapper back, and when you let go, it swings forward and strikes the bell, creating a beautifully warm, deep tone that reverberates across the little park.

The tradition here, is that when you ring this peace bell, you call out to the world a prayer for peace.  A prayer for the end of war.

From the city of war, comes the call for peace.

I don’t know what inspired me to do this, but I crouched down and stood up with my head inside the bell, and asked my friend to ring the bell.

It was a strange thing…

I was expecting to be enveloped by sound, but I was not.  I heard the sound of the bell, but it was strangely quiet.

All the energy of the bell – all the vibration – was moving outward.  Inside the bell, it was quiet.  Peaceful.

I remembered this peace, when I read this mornings gospel lesson.  When I read about Jesus rising quietly, in the dark before dawn, to look for a deserted place to pray.

The center of God, I hope, and I pray, is a place of peace.

A place of healing,

From here – from this peace – Jesus can go forth to do what he had come to do – teach and heal the world.