At approximately 3:30 p.m. on June 24, 2002, two men in plain clothes stormed the offices of The Analyst newspaper in Monrovia, Liberia.  They grabbed the newspaper’s editor-in-chief, a man named Hassan Bility and forcibly pulled him out into the street. Because his abductors were not uniformed, Hassan Bility asked the men to identify themselves, and when they refused, he resisted.  Two of Bility’s professional colleagues, a reporter from the BBC and another representing Voice of America, were among the crowd that gathered on the sidewalk.   Also present was Bility’s 4-year-old son, who watched as his father was slapped, kicked, and finally forced into a wooden van.

Thus began a 6-month ordeal.  Incarcerated, tortured, and abandoned in a hole to die, it was something of a miracle that the newspaper editor survived to tell the tale. 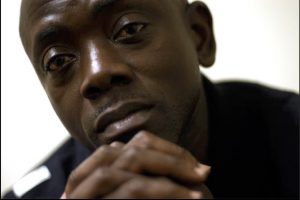 Hassan Bility’s newspaper, The Analyst had been running news stories that were openly critical of Charles Taylor, the president of Liberia.

Liberia is a small country in West Africa.   In 2010 the population of Liberia was just shy of 4 million people.

Taylor’s presidency began as a result of the First Liberian Civil War – a war that he started.  This war that lasted from 1989 to 1997 and claimed the lives of 600 thousand Liberians.

The end of Charles Taylor’s rule came as a result of the Second Liberian Civil War – a war that lastred from 1999 to 2003 and claimed and estimated 300 thousand more casualties.

That’s 900 thousand casualties in a country with a population of 4 million.

That’s 22.5 percent of the population!

That means that the two civil wars that were fought to prop up the ambitions of one man – Charles Taylor — resulted in the death of almost one quarter of the population of Liberia.

These are sobering statistics that tell of deep, deep human suffering.

When I prepare a sermon, I read the gospel lesson and look for parts of the text that surprise me.

If I can find something that surprises me, I almost always have a sermon.

And I almost always find something.

The gospel is a surprising text.

The gospel lesson, this morning, comes to us from the fourth chapter of the Gospel according to Luke.

Are you wondering what surprised me in today’s lesson?

Two things jumped out at me.

The first thing is the sentence at the very beginning.  It goes like this:

Now when Jesus heard that John had been arrested, he withdrew to Galilee.

What is surprising about this?

When Jesus responds to John’s arrest by withdrawing to Galilee the natural assumption that we make is that Jesus himself must be concerned that the same thing might happen to him – that he might be arrested too.

In other words, Jesus’ actions are the actions of a person who is fleeing persecution.

Those of you who were with us a few Sundays ago will remember that, right after Jesus was born, he was forced to run to Egypt in fear of a threat from Herod.

In this passage also, Jesus has to run.

I don’t know about you, but I find this surprising.

Not once, but twice, in a handful of weeks, the gospel reminds us of Jesus Christ’s relationship to power.

Power was threatened by him.

And because of this, Jesus had to run.

This is our savior.

Someone who is, time and again, forced to flee from those who are in power.

I said there were two things that surprise me about this morning gospel lesson.

The other thing that surprises me about this passage is the word “immediately.”

As Jesus walked by the Sea of Galilee, (the text says) he saw two brothers, Simon, who is called Peter, and Andrew his brother, casting a net into the sea—for they were fishermen.  And he said to them, “Follow me, and I will make you fish for people.” Immediately they left their nets and followed him.

Immediately they left their nets and followed him.

Why would two fisherman, who are described to be in the very act of throwing their nets into the water, hear the call of someone walking by and, without asking any questions, immediately leave their nets and follow him?

It makes me wonder.

The only thing I can imagine – and I think this is what the text wants us to think – is that somehow, these men recognized something irresistible about Jesus.

Did they know that Jesus was the Messiah?

Or did they simply know that they must follow?

How did these two fisherman recognize that Jesus was someone so important that he was worth setting aside their livelihood in order to follow.

They set aside their livelihood!  They did it immediately.

I am surprised by this.

I am surprised by this level of certainty.

I met Hassan Bility in the offices of Publio magazine, in Boston, in November 2005.

I wanted to write a story for the magazine about the plight of refugees in the United States, and I emailed an agency called the “International Rescue Committee” inquiring if there was an individual they suggest I interview.  They gave me Hassan Bility’s name and contact information.  That’s how I ended up across the table from this quiet, but powerful man.

In the course of our conversation Bility told me of the torture that he endured during his imprisonment.

His voice was oddly calm.

Turning his head slightly or lifting an arm, he revealed scars that he called his “torture marks.”

At the end of his incarceration, Bility told me, he was held for three weeks in a “3-foot high underground cell that was half filled with water.”

Astonished, I asked “How did you survive?”

When he answered, Bility’s voice contained a hint of wonder.

Let’s go back to the fisherman who immediately put down their nets and followed Jesus.

The prophets of the Israel and Judah – prophets like Isaiah and Jeremiah – had been predicting the appearance of the messiah for generations.

There was a strong cultural sense that the messiah would come – a hope that was ready to be fulfilled.

In other words, they were primed – they were ready for the messiah, so when he appeared they followed immediately.

I want to suggest that this cultural readiness combined with Christ’s natural charisma, to influence the men to immediately give up everything and become his disciples.

We are culturally sensitized to know that some things are so important that our attention must be immediate.

And like the fisherman of our gospel story, Bility hoped for something.

Bility was willing to be incarcerated, tortured and even die, on behalf of this hope.

A hope that you and I enjoy today.

A hope that you and I take for granted…

Bility hoped for freedom of the press.

In spite of his knowledge of Charles Taylor’s intolerance of media criticism, he continued to criticize.

Bility’s newspaper printed stories that were critical of Charles Taylor, with full knowledge that he could, at any time, be grabbed, beaten, thrown into a wooden van, and “disappeared.”

Bility, like brave journalists all over the world, in many many countries, practiced freedom of the press, not as a right, but as a hope.

And he paid for it.

You can say, he was a disciple to this hope.  He was willing to give up his life for it.

The first amendment of the constitution of the United States guarantees freedom of the press.

This guarantee, we should know, was purchased with the blood of those who died in the revolutionary war.

This guarantee, we should know, continues, to this day, to be purchased with the blood of those in other parts of the world who do not have a robust constitutional system of government.

The freedom of the press – we should remember – is a is rare freedom in this world.  It is this hope for this freedom that kept Hassan Bility alive as he crouched in an underground cell, up to his waist in water for three weeks.

This freedom is our birthright as Americans.  It has allowed each generation of American’s to subject the powerful to the scrutiny and judgment of the people.

And this freedom, we should remember, is only as robust as the government that promises to uphold and protect it.

We – you and I – have come to church this morning – and every Sunday morning – to assert and re-assert our belief in Jesus Christ.

Jesus Christ, we say, was divine.

Jesus Christ, we say, taught us a way to live.

When we say that the mission of our church is “To Grow our Christian faith through acts of love toward all” we express a sentiment that we have decided is of “immediate importance” to our lives, as a community.

Jesus taught us this love.

But this same Jesus, is the Jesus who fled from power.

He fled from power because he had no political power.

Ultimately… he had the greatest power of all.

He had a power that does not clench its fist,

He had a power that opens its hands.

He had a power that does not start civil wars,

He had a power that creates civil engagement.

He had a power that does not seek to obscure the truth.

He had a power that reveals truth.

His was a power of immediate importance.

The power of love.