You are standing at the top of a sledding hill that is covered with freshly fallen snow. 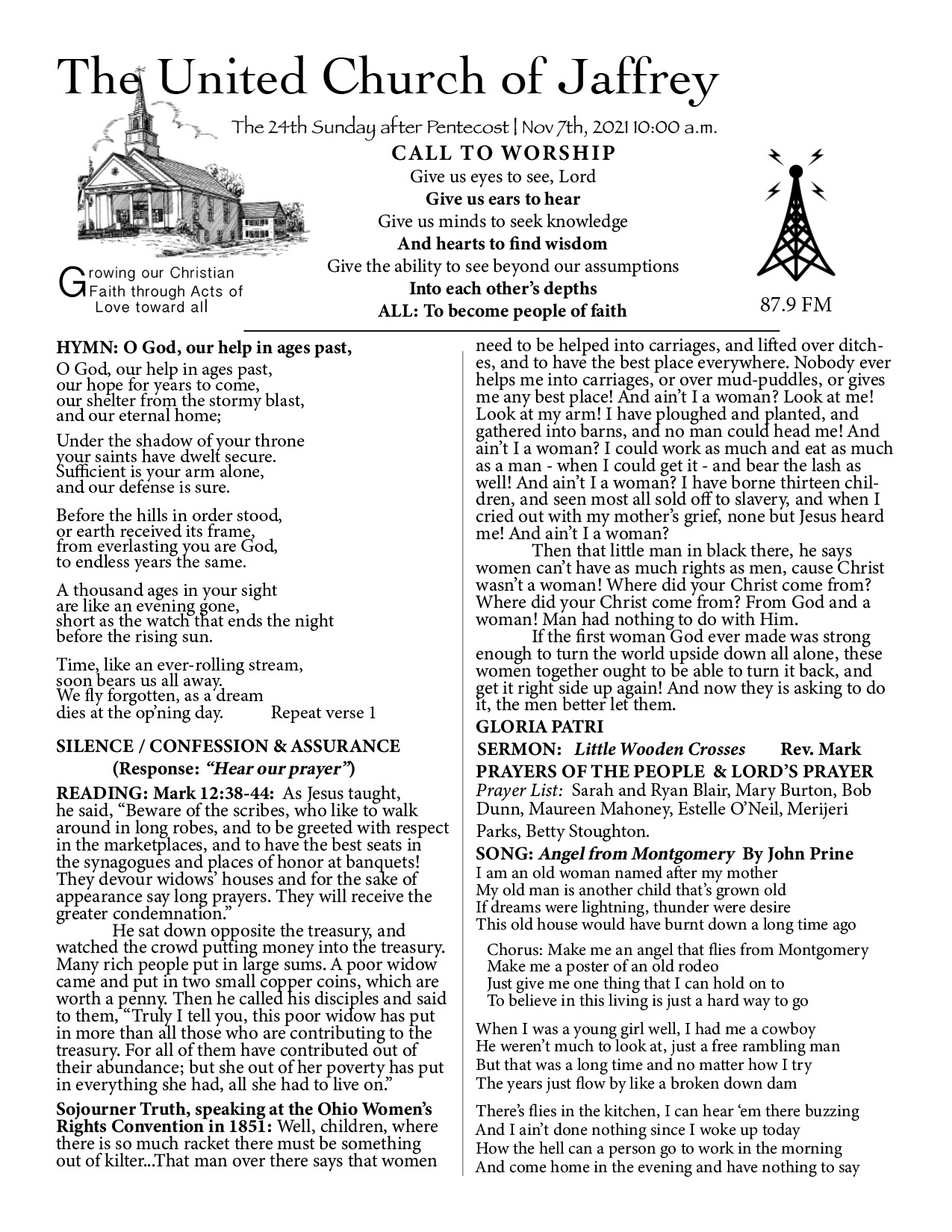 No one has come before you!

Grabbing the front of your sled you take a running, head-first leap.  Your whole weight lands on the sled, which is propelled down the hill!

But you don’t really zoom!

The snow, still fluffy, slows down the passage of the sled, and so, cold and a little disappointed, you stand up, at the bottom of the hill and clamber back up.

This time, when you run and leap, your sled finds the path you’ve already made, and…

From then on, for the rest of the day, until you are blissfully worn out, you zoom, zoom, zoom on that first path you made.

Other people show up, and they use your path too!

You might try making another path, but if you do, it would be slow.  Why bother?  It feels better just to stick with the path you’ve already made!

Folks, I’m bent out of shape about something.  I’ve been stewing over this for a while, and this morning’s gospel story suggests to me that this beef I have is nothing new… Jesus hated it too.

Left to our own devices, we are superficial creatures.  Most of the time when we look around we see things in an overly simplistic way.  We live according to the information that is presented to our senses, and most of the time we don’t question the powerful assumptions that our first impressions guide us to.

We all do this – it’s a tendency that is natural to our entire species.  The first information that we take in about a person or thing, feeds into an learned assumption about that thing, and that assumption then becomes our guiding understanding about that person or thing – even if it might be totally and utterly incorrect.

I borrowed the metaphor of the sledding hill from Michael Pollan, one of the public intellectuals whose books I like to read.  Our minds do this, he says, they literally create well worn neural pathways that are like those sledding paths.  These neural pathways allow us to zoom zoom zoom from information to assumption without slowing down any.

We live in a time when God has been replaced by Google.  But guess what everyone?  Google only gives us information.

Try Googling the word “Strong.”  The first hit you get is a definition from the Mirriam-Webster online dictionary: “having or marked by great physical power.”  Do a Google image search on the same word and one of the first images you are assailed by, is an arm, a big thick male arm curled up to show all its popping muscles.

The rest of the page is filled with young men with six pack abs lifting heavy weights, and lithe young women sprinting in place.

Is that what strength is?

Google – the most powerful force that shapes our understanding of the modern world, is an engine fueled by superficial assumptions.  It receives our superficialities and serves them back to us multiplied a thousandfold.

Jesus told us something very different.

The strongest person he saw was a widow.

What could he have meant by that?

I first met Bill when I was standing at the back of a church in Connecticut shaking hands with people as they left the sanctuary.

“Thank you for your sermon…”

A thin little man with a scraggly grey beard came up to me in the line.  By this time I was glad-handing like the worst kind of politician, just reaching out without looking, but I reached for this man’s hand, I felt air – and then something strange… a metal hook.

This man didn’t have hands!  He had two prosthetic hooks.  But that didn’t stop him.  Or me.  I shook his hook!  He smiled.

But he wasn’t done with me.  He pulled me in close and said:

“I got something for you…” he reached into the pocket of his sports coat,

And with that little rhyme, he pulled out a small wooden cross, put it in my hand and winked.

Well, you can bet I asked the minister about Bill.  The minister smiled  and laughed.  “That was Bill,” he said.  He started pointing here and there.  I hadn’t noticed it before, but the church was overflowing with little crosses just like the one in my pocket.  They were strewn around the pulpit, on top of the organ, and in the choir stalls.   All the teenagers in the church received one at confirmation.  Each cross was about the size of a deck of cards, made with dowels, and painted gold.

How did a man with no hands make handmade crosses?  After a while no one asked the question anymore.  The crosses were a part of Bill’s extravagant faith – the conspiracy of his well-being that could not be dampened by disability or even by imminent death.

It wasn’t long before Bill was too weak to come to church, so the minister and I began making weekly visits to the apartment that Bill shared with his wife.  The modest apartment looked out through scrub trees at the edge of a parking lot.  Faded photographs chronicling the lives of the kids populated the walls.  Our conversation was accompanied by the steady hiss of the oxygen concentrator that was helping the old man breathe.  Bill had been told not to move around too much, so he positioned himself at the table and held court from there – the glint in his eyes never wavering.  His faith was thorough, uncomplicated, good-humored.  He liked simple rhymes that he often made up on the spot.  With a wink he’d initiate you into a conspiracy of wellbeing – a certainty that, in spite of it all, everything was going to be fine.

But everything wasn’t fine.

Those of us who were in that little apartment with him – his wife, the minister, the intern – we all sat around with a hollow feeling in our guts, knowing that he wasn’t going to be around for much longer… We were all trying not to be sad.  All of us, that is, except Bill.  His quiet, knowing smile never wavered.

There were medications and elaborate interventions available that could have prolonged Bill’s life.  Some of his friends and family did their best to talk him into taking them.   But Bill just smiled and declined.  He didn’t want to have anything to do with any of that.  He felt his time had come, and he wasn’t going to interfere.  I think this way of dying was part of the life of his faith.

And then Bill died.

We all knew it was going to happen, and because Bill helped us get used to the reality of it, we settled into the idea.  He was gone, but no one doubted where he was.

Later, someone told me that the industrial accident that had deprived Bill of his hands so many years ago, had not severed his hands as I supposed.  His hands had been crushed.  Surgeons made several attempts to reconnect and rehabilitate his hands, but with no success, and during this process Bill suffered immense and prolonged pain.  Finally, Bill said “Enough!”  It was through an act of his will that the operations stopped.

This part of Bill’s story stirred me.  The reservoir of fortitude that had deepened with the loss of his hands had clearly given strength to his calm determination to die.  There was, it seemed to me, a mysterious and beautiful connection between the depth of his suffering and the strength of his faith.

Theologians often speak of the cross.  Not a cross – but the cross.  The crucifixion of Jesus Christ is spoken of as a singular event that altered the course of salvation history. But when I look at that cross Bill gave me, I think, not only of Christ, but also about Bill – the way he suffered and the way that his suffering transformed him into a man of deep faith and extraordinary strength of integrity.  I think that Bill’s spiritual redemption was a very physical experience, and I think the same thing is true of the event of Christ’s crucifixion.

That I found this beautiful echo of Christ’s suffering and redemption at the end of the hall in an old folks home in blue-collar central Connecticut, speaks to me of the universality and the relevance of the gospel story.  In a pastoral sense, the divinity of Christ – his ultimate relevance to our humanity—depends upon the extent to which he “shared our common lot.”

The way he… humbled himself and became obedient to the point of death—even death on a cross. (Philippians 2:8)

Bill taught me that Christ’s divine and human nature is not a theological conundrum or mysterious paradox, but a straight-forward physical reality that we experience at the core of our humanity.  We can know about the human and the divine happening all at once, because we suffer and love all at once.  The cross – which fused the intersection of suffering and love – became the example for many crosses—crosses that can be found in any humble apartment that peeks through scrub trees at the edge of any parking lot in any part of the world.

It is not enough to be creatures forever zooming from information to assumption.

To do this is to fall prey to the many sins of the world that feed on superficiality – racism, sexism, classism.

But making the new neural pathways that lead to new conclusions is not an easy thing to do.

It takes a willingness to push through fresh snow.

To be frustrated and cold.

And yet, to be transformed, we need to make these new neural pathways.

And we must be transformed.  We must be the creatures that transform information into knowledge.

Google offers us the profane zoom.

God offers us the sacred transformation.