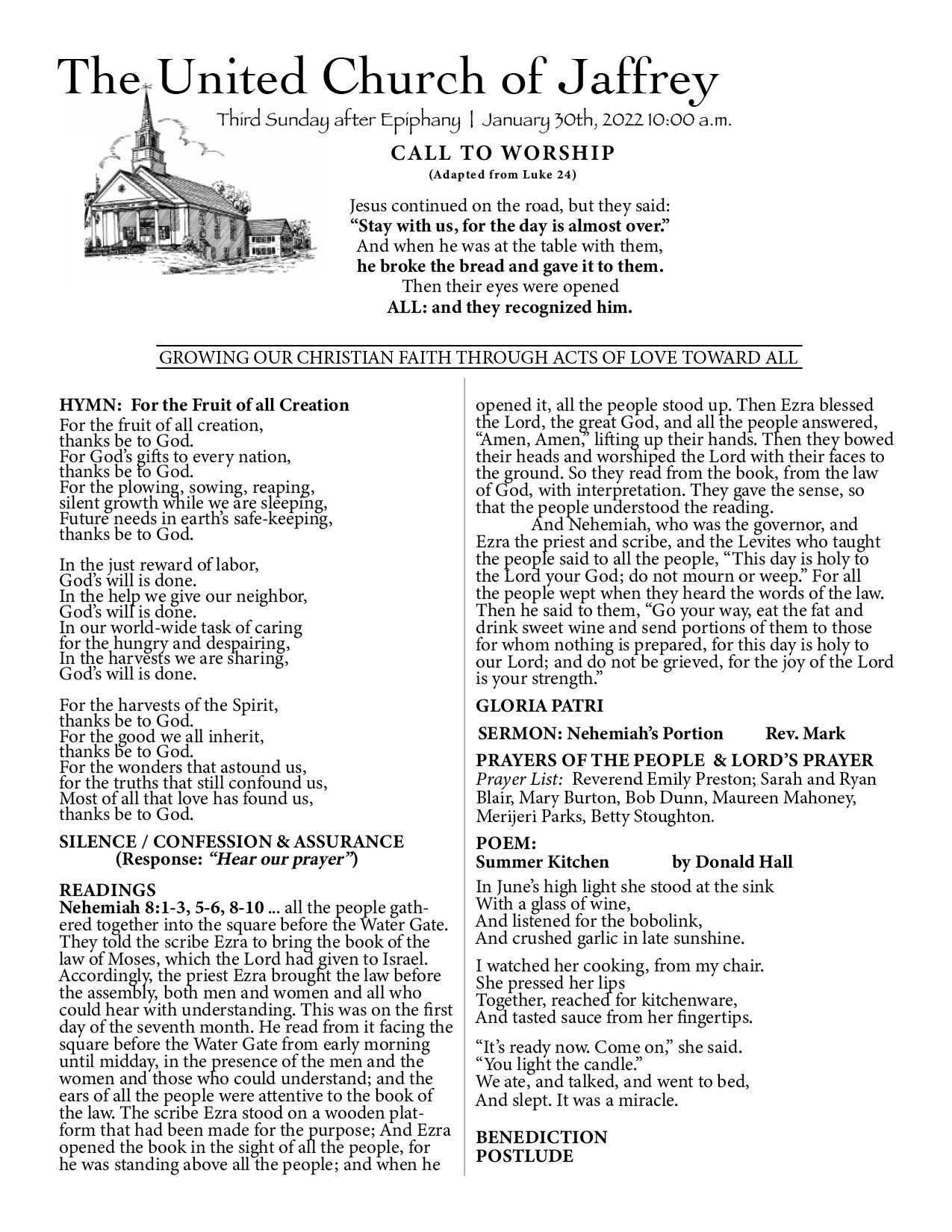 Way back in October of 2019 (it seems like another lifetime ago!) I preached a sermon that was called “200 sandwiches” in which I told of an experience I had as an intern at the Yale University Chapel, in New Haven.  The Yale Chapel was one of several churches that surrounded the New Haven green – a group of churches that collaborated to help feed the population of folks who were living in the streets.  One Sunday a month, it was our job to provide an outdoor communion service, after which we gave out a free lunch.  On those Sundays, we would gather, after church, and make 200 hundred sandwiches, put the sandwiches in boxes, and carry them over to the spot, under the giant old trees in New Haven green, where we would run the service.

Two hundred sandwiches is an impressive number of sandwiches.  I don’t recall exactly how many cardboard boxes we had filled with sandwiches, but I remember thinking, as I helped carry them over, that we ought to have enough to go around.

Things started out well enough, but the line was long, and inevitably, the number of sandwiches began to visibly dwindle, and I found myself eyeing the bottom of the cardboard box with growing anxiety.

I remember thinking — what am I going to say when person number 201 comes up?

Is any of this ringing a bell for any of you?

The scripture passage I was preaching about back in October 2019, was the well known story in which Jesus feeds 5000 people with a meager basketful of bread and fishes.  In that story, Jesus encounters the same problem I was experiencing in New Haven — too many people, not enough food — but at the crucial moment — the moment when person number 201 appeared in line, Jesus did not have to say “sorry.”  He just kept on giving out food.

But much as I’d like to imitate Jesus, I have to accept the limitations of my humanity, and accept that when I am faced with Hungry guy number 201 I can’t give him a sandwich.  My 201st hungry man was confronted with something he was already far way too familiar with…

Hunger was his reality.

The problem with reality is that you can’t eat it.

At least not most of the time.

There is nothing more serious than poverty and hunger, and if the Divine has anything to say about this basic form of human inequity, then we better listen up.

We humans may not be able to perform miracles, but there are, nevertheless many places in the Bible in which our distribution of food represents a form of divine grace — and for good reason.  A religion that emphasizes the sharing of food, rather than competition for it, and that encourages communal nourishment as an ethical imperative, is not only more compassionate, it is also likely to more attract followers.  This is as true today as it was during antiquity.  Then and now food insecurity has always been an urgent reality.

Father Andrew MacGowan, an Episcopal Priest who is also the Dean of Berkeley Divinity School, has written extensively about the involvement of food in the history of worship.  According to MacGowan, the Christian Eucharist — which, today could not exactly be called a meal — was at one time a banquet of sorts, that took place in the evening, and was open to people from all walks of life.  It was a place where hungry people could come and get something to eat.

Back in Divinity School, when we read McGowan’s work in our History of Christian Liturgy class, I recall someone raising their hand and saying “We still do that – we just don’t call it Eucharist anymore – now it’s called a church dinner.”

Isn’t it amazing how thousands of years seem to evaporate when certain things – things like worship and food for example – come under scrutiny?  There has never been a time when humans haven’t felt an urge to commune with something greater than themselves.  As creatures, of course, we need to eat to survive.  Yesterday, today, and tomorrow, these two things: eating and worship – have always, and always will be, connected by our urge to make meaning.
When I looked over today’s scripture passage from the book of Nehemiah, I was somewhat taken aback by the description of the worship service, and how similar it is to our own.

People gathered.  Ezra  “brought the law before the assembly,” and “stood on a wooden platform”, and “read from it.”  “Then Ezra blessed the Lord, the great God, and all the people answered, “Amen, Amen,” lifting up their hands.”  Lest the people not understand what was written, Ezra provided “Interpretation” so that “the people understood the reading.”

The basics are all there – the gathering of the community, the reading, the people’s response, and even the interpretation.   It made me wonder if this passage may have some historical significance as a kind of blueprint in the development of worship in the Judeo-Christian context.

I say “Judeo-Christian” because Nehemiah – a book that we seldom if ever read from – is in Hebrew Bible (formerly known as the Old Testament) and the events recorded there are believed, by scholars, to reflect many real historical events.

Nehemiah himself, the story goes, had been a Jew who, along with thousands of others, had been living in exile in Susa – the capital of Persia.  Nehemiah must have been an impressive fellow because he, apparently, was the “cup-bearer” for Art-xerxes, the Persian king – the person, that is, who could be trusted to serve the king without poisoning him.  Since Nehemiah had the king’s ear, he convinced Artaxerxes to let him return to Jerusalem and help the Jews who were there – the Jews who were vulnerable to attack because the walls of Jerusalem were in ruins.

Artaxerxes made Nehemiah the governor of Judah, and the first thing Nehemiah did – the event that the book of Nehemiah narrates – is the rebuilding of Jerusalem’s fortifications.  The enemies of Israel were so present and so threatening, that the workers had to build with tools in one hand and weapons in the other.

So the particulars of worship described in the book of Nehemiah are not the only thing that is similar to our experience.  The Jews of Nehemiah’s time, like us, were a community of people are finding there way back from exile, into sanctuary.

This may account for why the people, gathered to worship, “wept when they heard the words of the law…”

They may have wept in remorse for losing sight of the law, or they may have wept with relief in finding themselves, once again, in a context that they could begin to depend on and understand.

And then, notice what Nehemiah did in response to this public expression of grief.  When the service was completed Nehemiah spoke to the assembly, saying:

“Go your way, eat the fat and drink sweet wine and send portions of them to those for whom nothing is prepared, for this day is holy to our Lord; and do not be grieved, for the joy of the Lord is your strength.”

Sharing and eating creates joy.  This is the Lord’s strength.  Being nourished, being alive, is to know that the joy of the Lord is your strength.

We do not have access to miracle, so what we can do is, is what Nehemiah did – create the institutional habit of feeding people.

We have done this.

Kathleen LaRou and our worthy food pantry volunteers have never stopped feeding people, throughout the pandemic.

They have never stopped giving out “Nehemiah’s Portion” to “those for whom nothing is prepared.”

Without access to miracle, we have madfee eding the hungry an intentional, institutional purpose – something that is done, as a matter of course – as an expression of the sacred, as a joy of the Lord.

Whether a person is fed through miracle, or through this habitual intention of the church – justice is done when they are fed.

Either way, they are fed.

A reality that can be eaten.