I received an email from the United Church of Christ last week.

Every once in a while the bigwigs who run the denomination over in Cleveland get excited about something and send an email out to every minister.

This particular email was promoting a short video that the UCC had just produced that was entitled “Trading Places.”

The video begins with a Christian minister all dressed up in his vestments, as if he is about to lead a service.

Two people join him — a woman and a man.  The woman is wearing a yarmulke – one of those skull caps that observant Jewish people wear; and the man wears a kufi the headwear that Muslim clerics wear.  The woman, it is clear, is a Jewish Rabbi, and the man is a Muslim Imam.

Each leader begins dressing in another’s vestments, and pretty soon, all three have traded places.

Then comes the clincher.

The Rabbi, now dressed as in the minister’s vestments, enters a full church.

The Minister, now looking a lot like an Imam, stands before a crowd of Muslims.    And – you guessed it, here’s the Imam, preaching in a Synagogue.

Now that they’ve switched clothes, its surprisingly hard to remember which one was originally which.

And this confusion is deepened when they all start preaching – because their message is identical.

All three religions, it appears, can say the same things about praise, about justice, and about love of neighbor – and none of their followers notice that anything is amiss.

The video ends with two captions.  “Each religion is unique and wonderful in its own way” it says.

And then finally: “But what unites us is greater than what divides us.”

What unites us is greater than what divides us.

Seeing the crowds, Jesus went up on the mountain,

and when he sat down his disciples came to him.

And he opened his mouth and taught them, saying:

Thus begins the Sermon on the Mount.

Or, put another way…

But wait a second.

This statement makes me a little nervous…

It makes me nervous because, as well as being your minister I am also a teacher of world religions.

What’s more, I lived in Asia for many of the formative years of my youth.

So I hesitate a little bit when I proclaim that Jesus was the most influential person in human history.

To be sure, it is easy enough to cite data that objectively demonstrates that there are more Christians in the world than followers of any other religion… and so one can, without much difficulty, claim that Jesus is the most influential religious figure in human history.

But even if this is true, it would be a mistake, I think, to ignore the fact that other religions (even if we don’t practice them) play an important role in our lives in the 21st century.

Well then, let us follow the lead of the bigwigs in Cleveland and test the notion that “what unites us is greater than what divides us…”

Listen, again, to the first sentence of the Beatitudes.

If we look closely at this sentence we notice a few things.

The first thing to notice is the first word – the word “blessed.”

Jesus does not say “In my opinion, the poor in spirit are blessed.”

Jesus is not beating around the bush here.  He states quite plainly, that the people who are blessed by God are the “poor in spirit.”

What does that mean?

I’m trying to figure that out…

Maybe it would help to see what Jesus is not saying.

Jesus is not saying: “Blessed are the poor, for theirs is the kingdom of heaven.”

He is not idealizing the state of being poor.  He does not suggest that poverty itself is a virtue.

Nor is he saying: “Blessed are the poor of spirit, for theirs is the kingdom of heaven.”

This would mean that someone with a poor spirit – that is, someone whose spirit is not well developed – is blessed.

That would be weird, wouldn’t it?

That would mean that Jesus himself would not be blessed, since his spirit was certainly the most well developed.

The phrase is “poor in spirit.”

But again… what does that mean?

The prophet Muhammed was said to have been born in the year 570.

Six months after his birth, Muhammad’s father died and he was sent off, still an infant, to live with a nomadic tribe of Bedouins who lived in the Arabian desert.

At the age of six, he was orphaned by the death of his mother, Amina and he went to live with his paternal grandfather.

But his grandfather also died soon thereafter, and the young boy was passed along to his Uncle, Abu Talib.

Muhammad’s life was not easy.

But he was strong.

According to legend, while a six-year old Muhammad was tending his uncles’ sheep, two angels appeared, removed his heart, and cleansed it with snow.

Blessed are the poor in spirit, for theirs is the Kingdom of Heaven.

Moses was born into a time of great sorrow for the Hebrews. They were suffering under their Egyptian task masters, who had made them slaves.

Not only that – the Pharaoh – afraid of the growing number of Hebrews in Egypt, proclaimed that all of the male children born the Hebrew women were to be thrown into the Nile to perish.

But Moses was saved this from fate by the daughter of the Pharaoh of Egypt, who found him in a basket in the bulrushes.

Because of this good fortune, Moses grew up in the Pharaoh’s court as part of the royal family.

But this state of affairs couldn’t last.

One day Moses saw an Egyptian beating a Hebrew.  Moved to anger, Moses struck the Egyptian, killing him.

He was forced to flee. 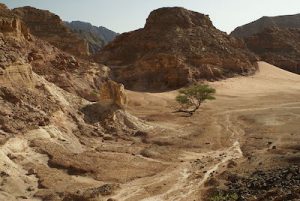 The Land of Midian

He had been a prince of Egypt, and now he was alone, wandering in the wilderness.

Eventually he found his way to the land of Midian, and he settled there.

And it was in that barren, windswept land, stripped of everything that had given him identity, that God appeared to Moses.

And yet, even as raw and exposed as he had become, God still demanded more of him:

“Take off your shoes, for the place you are standing is holy ground.”

The Buddha too had been a prince.

His name was Siddhartha Guatama, and at his birth, his father – the king of a region in Northern India — had been given a prophecy.

Young Siddhartha, the prophecy said, would grow up to either conquer the world, or renounce it.

Siddhartha grew up inside this palace.

Never going outside, he knew nothing of the pain of the world.  He only knew pleasure and beauty.

Finally as a young man his curiosity overcame him, and he snuck out with a charioteer, who showed him the world. 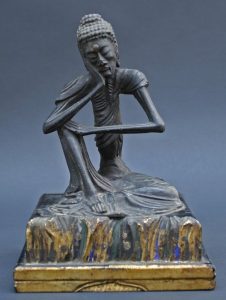 Outside the palace he had four famous encounters that changed his life.  He saw an old man.  Then he saw a sick man.  Next, of course, he saw a corpse.  Finally, he saw a monk.

The discovery of pain, sickness and death, led Siddhartha to give up everything and become a monk.

He left behind his courtly life and went to the forest.

He fasted and meditated for many years – nearly dying.

Finally, he attained enlightenment – but not before he gave up everything.

Religions all over the world tell us a similar message.

If we want to become aware of the divine in our lives, we need to become “poor in spirit.”

Need I even point out that this message is the direct opposite message from the one we are force fed every day – every hour, every moment – of our lives, here in 21st century America.

We are told that we need a good car.

We need an IPhone.

We need a new dishwasher.

Should we give up on all that?

To be blessed, Jesus tells us to be “poor in spirit.”

Ultimately, though, I think that being “poor in spirit” does not necessarily mean shunning all material wealth.

I suspect that being “poor in spirit” means become spiritually aware that you are in need.

Who among us is “poor in spirit?”

Who among our leaders, is spiritually aware of their need?

Allow me, in conclusion, to make one final observation about the sentence we have considered today.

I want you to notice a very boring word — the second word: “are”

The word “are”  “A.R.E”  is a theologically meaningful word.

In English, “You are” can be singular or plural.  In this case it is plural.

But this is all neither here nor there.

The thing I want you to notice about this word is that it is in the present tense.

Jesus does not use the future tense: “Blessed will be…”

God’s blessing is not a promise that is yet to be realized.

It is not like Martin Luther King’s famous speech that envisions a future when “children…will not be judged by the color of their skin, but by the content of their character.”

Nor does Jesus use the past tense.

He does not say: “Blessed were…”

God’s blessing not a nostalgic exercise either.  It’s not the like popular obsession that has captured the imagination of many, these days, that America would somehow be better off if we could go back to the 1950’s.

“Blessed ARE the poor in spirit…”

The poor in spirit ARE blessed.

They are blessed NOW.

“NOW” is the Holy moment.