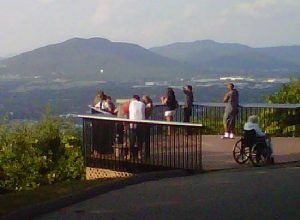 We became viewers of views…

“…With the rise of industry, we began to romanticize the wilderness… Because of railroads and improved highways, the wilderness was no longer an arduous passage for the traveler, but something to be looked at as grand or beautiful… We became viewers of “views.”  …We forgot that the civilized and the domestic continued to depend upon wilderness–that is, upon natural forces within the climate and within the soil…  Modern civilization has been built largely on this forgetfulness.” — Wendell Berry

This happened 21 years ago, when I was living in New York City.

Join me, if you will.

I am, sitting in the library staff room at Columbia Presbyterian Hospital.

You might not recognize me.  I’m a bit thinner.

But the real difference is the dreary look on my face.

I’ve been working the swing shift for too long.

Have you ever worked the swing shift?

It’s a tough way to live.

You get home from work around midnight, if you’re lucky…

but sleep — which is what you need more than anything — is out of the question.

This is because you are twired.

You know what I mean by twired?

That’s when you’re too tired to do anything but sleep, but you can’t sleep cause you’re too wired…

So you helplessly wait it out until eventually, around 2AM, tired wins.

You sleep till noon.

Lunch is your breakfast.

The normal people you work with are blissfully ignorant of your plight.  They watch the clock, and when 5pm rolls around, they head home.

But not you.  You get to stick around.

Dinner is your lunch.

And just when you’re body has decided to be awake and productive — the sun goes down!

They should rename it Kafka shift.

Anyway, there I am, sitting in the library staff room at Columbia Presbyterian Hospital.

As I chew at my lonely sandwich,

this is what I see…

the window – a wide expanse of muted glass.

One of many hospital buildings – an immense block of gray cement cut along rigid edges, framing a multitude of dark rectangular windows.

Up and down the length of the avenue – a multitude of other buildings, with their own rigid lines.

It’s an opening where a flight of stairs leads away and down to the west.

And at the bottom of this stairway, something glistens.

I peer at it for a while until, at length, I figure out what it is.

It is a very tiny, postage stamp-sized square of the Hudson river.

I can just barely make out the current moving as it catches the last rays of the setting sun.

In my entire field of vision – almost, I realize, in my entire waking consciousness that day — that tiny speck of river is the only evidence I have seen that the natural world exists at all.

The story that I have just told describes a life that is quite different from the lives that we lead up here in southwestern New Hampshire.

A person working the swing shift in New York City can, quite easily, get up and go to work on the subway and hardly even see the sky, let alone a tree or a piece of ground.

Such a person can live for years without once catching the scent of the earth, without once feeling the dirt in his hands.

Such a person, whether he knows it or not, has forgotten something…

Something of immediate importance.

Something of ultimate value.

In the modern reading that Owen just read for us, the great poet, novelist and essayist, Wendell Berry, talks about forgetting.

Once we established railroads and good highways, Berry says, the wilderness was romanticized.  It was changed from a forbidding, difficult place, to beautiful view.

And we became “viewers”

Nature became something to look at, and when this happened, we forgot.

We forgot that we depend on nature for our existence.

And, Wendell Berry says, “Modern civilization has been built largely on this forgetfulness.”

When I was sitting in that break room, looking at that tiny postage stamp sized square of the Hudson river, I made a mistake.

It was perfectly reasonable mistake.

A mistake that we all make.

I believed that everything that I saw – all the buildings and concrete and asphalt and glass and cars and streetlights – everything that was in my field of vision – everything, that is except that tiny square of river – I assumed that it was all unnatural. 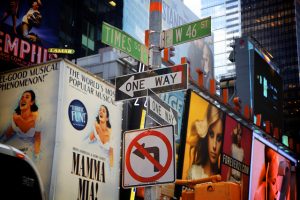 But in fact, what I had forgotten, was that everything I was looking at may be entirely manufactured – but… the raw materials that were used to build it all were found on this planet, and therefore, New York City, is kind of like a big nest.  It is not wild, but it is a habitat – an elaborate constructed habitat built by an overachieving and often ridiculous primate with an overgrown brain and opposable thumbs.

And the mistake that we make – the terribly dangerous mistake, that is at the core of our ecological crisis today – is the belief that this habitat that we have constructed is enough, by itself, to sustain us.

Modern civilization, as Wendell Berry says, is built upon this forgetfulness.

At every bend in the road, we are likely to catch a glimpse of the sun playing on the surface of a lake,

Or a great blue heron presiding over a wetlands area,

or the craggy top of old Monadnock peaking through the clouds.

Here in Jaffrey, you cannot open your eyes without being presented with the glories of the natural world.

Surely we have not forgotten the earth!

I think that living in the shadow of Monadnock, where, each night we hear the wind in the trees,

Where we struggle with long winters,

Where the Spring bursts forth on the roadside

Where the lazy summers stretch across the long pastures

And the fall crumbles in a whirl of rustling color…

We are more likely to connect our well-being with the rhythms of the earth.

But even here we must take care.

Because even here, our attitudes toward the earth is controlled by the language of our assumptions.

There is one of assumption, for example, that is so pervasive that we function from day to day without even being aware of it.

The assumption is this:

We think “nature” is a place.

We think “nature” is not here,

We think nature is something separate from us.  This notion is built into how we talk to each other.

For example, have you ever heard someone say:

“I love being in nature.”

Let me ask you a question:

When was the last time you were “out” of nature?

It is, in fact, not possible to be “out” of nature.

In the penthouse at the top of the Trump tower?   Nature.

In the middle of a fetid shantytown on the outskirts of Bogota?  Nature.

In the driver’s seat of a Lamborghini going 200 miles-an-hour?  Nature.

At the edge of the milky way, heading toward Alpha Centuri?  Nature.

Nature is not something you can go to, or leave at will.

If you are breathing air right now, you are in nature.

And when you stop breathing, you’ll become even more intimately acquainted with nature.

We cannot be outside of nature, because we are nature.

Nature is not a place.

Nature is both the fiber of our being, and the air, water and earth that sustains it.

So don’t talk about nature as if it is some quaint “view” that we have to preserve for our children’s children.

Reach down and feel the pulse at your wrist.

That rhythm that you feel?  That’s nature.

This happened about 19 years ago.

I was living in a 4th floor walk-up in Jersey City, which is just across the Hudson from New York City.

Join me, if you will.

There I am, sitting on the fire escape looking out at the backyard, which is strewn with weeds and trash.

Looking carefully, I can see the remnants of an old walkway, and in the center of the yard, toppled over, is an old statue of the Virgin Mary.

My first marriage has fallen apart, and this apartment, which belongs to Phil, one of my best friends from high school, has been my safe haven during the long lonely months of my separation.

I see Isabel, my 3-year-old daughter, several times a week, but it is a long trip into Manhattan to reach her, and my time with her always seems woefully short.

It is a time of deep loneliness.

I go back in from the fire escape and head downstairs to Phil’s place.

“Do you mind if I clean up the backyard a bit?”  I asked him.

It began slowly.  I just picked up the trash and moved it to the side.

Eventually I hauled the trash out.

I rescued statue of the Virgin Mary and moved her to a spot beneath a wild shrub, that I tamed with a pair of pruning shears I’d found rusting in the basement.

After work, a few days later, I cleared enough weeds to discover that the path that had originally led to Virgin was actually a flagstone path.

I started prying up one of the stones.

“What are you doing?”

It was a voice I did not recognize.  The woman on the third floor was looking out her window at me.

“I’m just messing around in the dirt,” I said.

There were two buildings that let out on that backyard.  Each building had four apartments.  The lady on the third floor beneath me, and the lady on the first floor on the other side were both elderly.  But everyone else in the buildings were on the younger side – young professionals who worked in lower Manhattan and commuted out to Jersey City in the evenings after work.

I worked in that garden for the rest of that summer, and soon, all the other young people were out there with me.

We pooled some money, drove out to a nursery, and bought some perennials.  We divided up the flagstone and rearranged it, creating areas that soon became spots for park benches.

The woman on the fourth floor on the other side was Linda.  Her boyfriend was Frank.  Stephanie was on the second floor.  Mindy and her husband Jerry were on the first floor.  Phil also joined in. 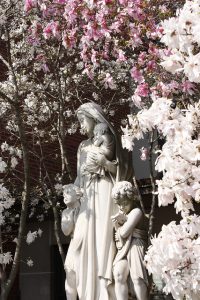 A window box appeared on the 2nd floor fire escape.

I liked the idea, and copied it on my fire escape.

Snapdragons and Zinnia’s bobbed their heads in my window.

The rich smell of dirt.

And the Virgin, presiding from beneath a blooming forsythia.

Is remembering the life from whence we come.