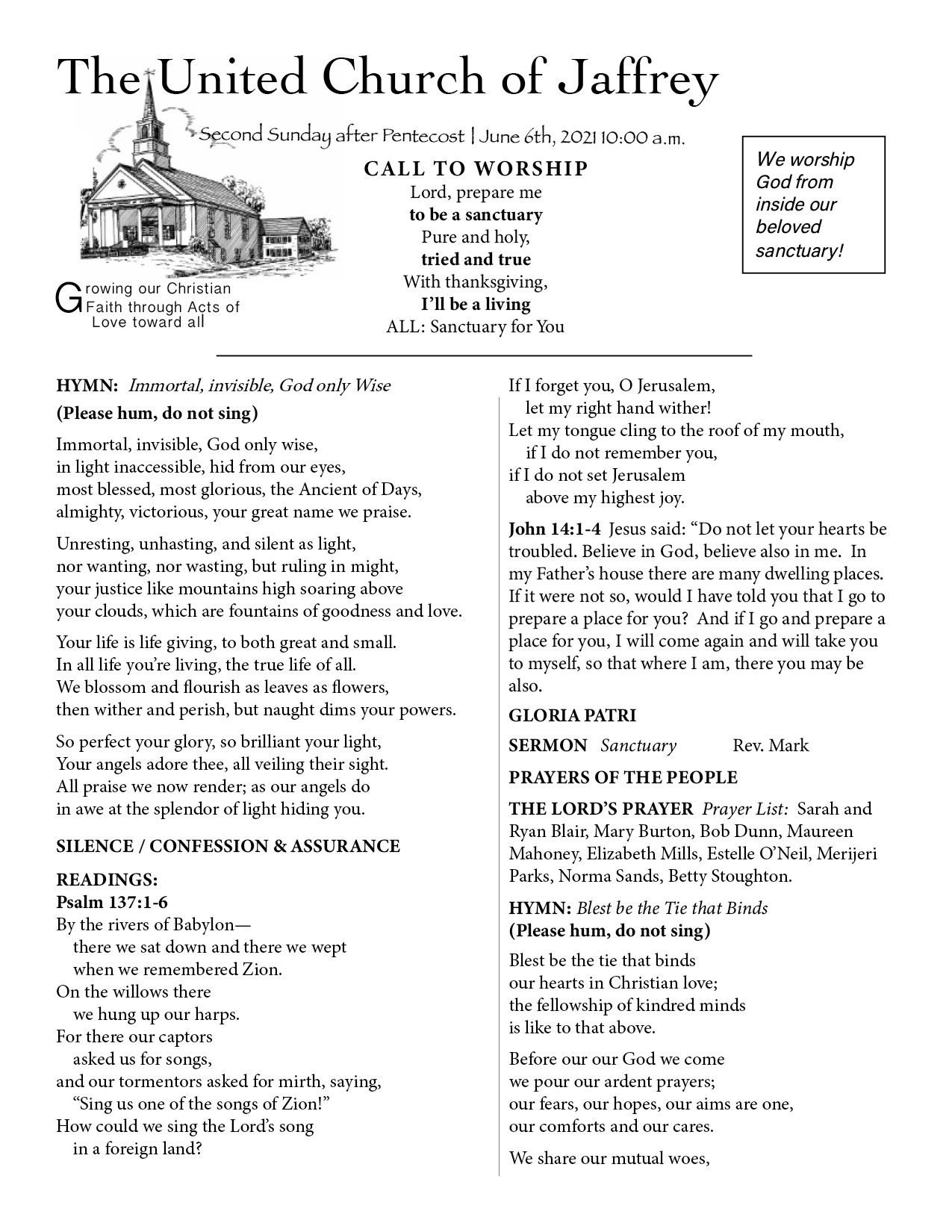 Bill Clinton was in the White House…

In 1994 the United Church of Jaffrey voted to became the second church in New Hampshire to become an open and affirming church.

I was not here, so I can’t tell you the story from first hand experience, but I’ve heard that the decision was not universally supported, and some folks left the church.

But I have also heard a story about how our church received the gift of the Burning Bush sapling from Plymouth Congregational Church — the one church that preceded us — and the person who grabbed the spade and began digging the hole for to plant that sapling, was a parishioner who had previously expressed doubts and concerns about the church becoming ONA.

That man showed courage, integrity and humility necessary to grow — to be transformed.

His small act was a seed of change.

With that act, this small church grew.

Back in 1994, becoming ONA was a move that pushed our society forward.

Today, though we are still beset with terrible problems, we have at least made a little progress with our LGBTQ brothers and sisters.

They may still face discrimination and hatred, but at least they don’t have to pretend that they are something that they are not.

A seed was planted.

When Jesus tried to teach his followers about the kingdom of God, did he talk about diamonds?

When Jesus tried to teach his followers about the kingdom of God, did he talk about palaces made out gold?

When Jesus tried to teach his followers about the kingdom of God, did he talk about yachts that cost 500 million dollars?

No, he did not talk about any of these things what did Jesus talk about when he tried to teach his followers about the kingdom of God?

He talked about seeds.

Why do you suppose he talked about seeds?

In an arid landscape, where rainfall is inconsistent, each seed is a matter of life and death.

When Jesus spoke about the Kingdom of God, he used metaphors that he knew his people would understand.

The seed is a remarkable symbol, really, when you think about it.

Jesus was a pretty astute teacher.

The seed has great power.

The seed is potentiality in its purest form.

It is the concentrated essence of a thing.

When a seed achieves the full realization of its potential is becomes a plant — whether it be the dandelion, the daffodil, the rose or the redwood tree.

In the tuber, the iris bloom awaits…

In the acorn sits the majestic oak.

The movement from seed to plant is called growth.

A seed, then, is the essence of growth — the instigator of transformation…

No wonder Jesus talked about seeds —

Where there is essence, there you find God.

Where there is transformation, there you find God.

A seed is small.

When I meditated on these things, I was reminded of a pathfinder message that I wrote a while back.  I had to search my computer hard drive for it,  but finally I found it… It was from the January 2017 issue of the Pathfinder.

The great poet, translator, and pastor of 29 years, Reverend Eugene Peterson was once asked if he had any advice for people trying to choose a church to go to.  He replied: “…go to the closest church where you live, and the smallest. And if after six months it’s just not working, go to the next smallest.”

Today’s world seems, in so many ways, to measure success in terms of global and big – but here is a refreshing suggestion that something that is modest and in our midst may be meaningful precisely because it is modest and in our midst. I love the part of the services on Sunday morning when we pray for our neighbors, family and friends whose troubles we carry in our hearts.  Where else, but in church, do we publicly acknowledge our common need, our care, and our concern. Sure, we also pray for people suffering in distant lands, and for our leaders to act with wisdom – but this is all done from a deep center of gravity, in this place, and in this community. This, it seems to me, is both profoundly beautiful and incredibly important.

I also welcome the way Peterson’s comment takes something commonly assumed to be a problem and turns it into a virtue.  There is no end to the hand-wringing that mainline Protestant denominations are doing about the dwindling number of people in the pews – and, to be sure, it is a matter of concern, but it’s worth considering that there is also some real value to being small. We don’t have to be a packed urban church or an arena-style suburban mega-church to be successful at learning the lessons of the gospel and trying to live in a way that acts out the love of God.

Local and small feels great to me.

I wrote that pathfinder message back in January 2017 when I had only been officially installed as your minister for two months.

Because, when Jesus asked us to get together, did he require that we get together in huge numbers?

Did he ask us to build huge cathedrals?

Did he ask us to get on television and raise millions of dollars to build immense structures out of crystal?

where two or three are gathered in my name, I am there among them.”

I think of the email that went out to the church chat on the days after the El Paso and Dayton Mass shootings.

Helen sent an email — a short cry of insistence, a wail of sorrow, a call to our hearts:

We MUST do something!

We cannot sit by any longer.

From that seed, came the Prayer Action — a mobilization of the entire community to build, paint, and plant 283 white crosses on our front lawn.

where two or three are gathered in my name, (Jesus Said) I am there among them.”

That one text, was the beginning of an idea that blossomed into the Sacred Ally Quilt Project — a collaboration of not one, but Nine UCC churches all across the breadth of New Hampshire.

This project has now become a ministry in its own right.  It has moved across New Hampshire and across the Eastern Seaboard, carrying its message of pain and healing.

where two or three are gathered in my name, (Jesus Said) I am there among them.”

We are a small church

Do we grow in numbers?

Hopefully, but that is yet to be seen.

We grow in faith.

God has planted a seed in our hearts…

Through acts of love toward all.