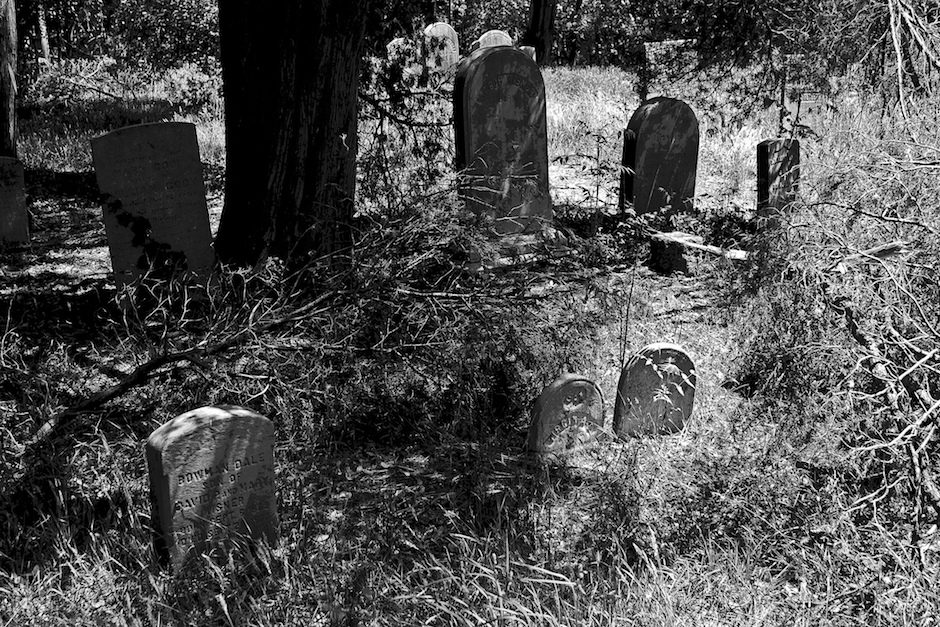 John 17:1; 6 -11 | Excerpt from an article by John Trowbridge entitled “The Wilderness” that appeared in the Atlantic Monthly Magazine in January 1866, 10 months after the end of the Civil War.

And what appalling spectacle was this? In the cover of thick woods, lay the unburied remains of two soldiers… I came upon them unawares as I picked my way among the scrub oaks.   I knew that many such sights could be seen here a few weeks before; but the United States Government had sent to have its unburied dead collected together; and I had hoped the work had been faithfully done.

After a careful examination of the buttons fallen from the rotted clothing, Elijah, my companion said: “They was North Carolinians; that’s why they didn’t bury ‘em.”

The cemetery was nearby, — a little clearing in the woods by the roadside, surrounded by a picket fence, and comprising seventy trenches… Each trench was marked with a headboard, inscribed with the words—“Unknown United States soldiers, killed May, 1864.”  Close by the southeast corner of the fence were three or four Rebel graves with old headboards…The graves were shallow, and the settling of the earth over the bodies had left the feet of one of the poor fellows sticking out.

Shadows darkened the woods, and ominous thunder-growls culminated in a shower. Elijah crawled under his wagon and I sought the shelter of a tree… . How quietly upon the leaves, how softly upon the graves of the cemetery, fell the perpendicular rain!

When I was a teenager, in the early 1980’s, I spent the summers at a Bible camp that was located in the woods, about an hour outside of Richmond, Virginia.

One day, late in the afternoon, a friend and I skipped out on prayers and wandered off into the woods.

The kid seemed to know where he was going but he wasn’t letting me in on it.

After a long time bushwhacking through the bracken, he finally stopped and announced that we’d arrived.

It wasn’t a clearing so much as a momentary break in the woods.  There was no view, other then a glimpse of sky visible through the full canopy of midsummer.

At length, though, I found what we’d come for—a lonely headstone cropping out of the earth.

“There’s another one over there,” my friend said, pointing into the underbrush.

We stooped over the headstones.

The years were writ more indelibly there then the names, but brushing aside the lichen, we could read enough to see that the men who lay there were confederate soldiers.

Some fitful conversation was all we could muster—before long the deserted monuments put a hush on us, and we found ourselves in just the kind of solemn reverie that we’d tried to escape by playing hooky.

It was a melancholy thing, sitting in the mottled shadows of the woods, imagining the skirmish that had taken the lives of these men more then a hundred years before.

That they may be one.

That they may be one.

This phrase – which appears at the conclusion of today’s gospel reading from the book of John, has been adopted as a motto by the United Church of Christ.  If you find yourself at any UCC event – such as the “Prepared to Serve” conference that many of us recently attended, you are likely to see banners here and there proclaiming the words:

Wander through the vendor areas, and you will find booklets, bumper stickers, leaflets, buttons, even baseball caps that say

But what does it mean?

When you look carefully at this phrase, it is a little odd.

“They” is a third person plural pronoun.

“One” on the other hand, is not plural.  It is singular.

The idea, then, is that something that was plural, wants to become singular.

Jesus, in this passage, is praying to God.

So when Jesus says “That they may be one” the “they” he is talking about is humanity.

Jesus is expressing to God, the hope, that his, Jesus’, teaching, will make humanity “one.”

It is, of course, absurd to think about this in physical terms.

Each of us is an individual, limited by the constraints of our physical bodies.

So, naturally, when Jesus speaks of “becoming one” he is talking about a spiritual one-ness.

We do not know what happens after death – after we leave our physical bodies.  Perhaps then, we can “become one” in some mysterious way.

But while we live – while we exist in our bodies, spiritual one-ness is achieved when we are united.

To be united is to agree.

Unity happens when an idea is so powerful and so compelling that a community agrees that that idea should be a guiding principle.

So unity is about the power of an idea.

The more powerful the idea

The more unity – the more one-ness – it creates.

In our world, unifying ideas tend to come from two sources.

When young men hurl themselves into battle, they do so with words “For God and Country” on their lips.

In religion we seek unity…

The United Church of Christ.

In our national identity we also seek unity…

The United States of America.

When the nation mobilizes for war, one of the phrases that starts appearing on bumper stickers, yard signs, and newspaper headlines is the proclamation: “United we stand…”

And sometimes the second part of that saying appears:

Jesus, himself, in the 12th chapter of the book of Matthew, said:

In religion, and in national identity, unity is a considered one of humanity’s great virtues.

Division suggests weakness – the precariousness of a tree without roots, a building with no solid foundation.

Memorial Day was first proclaimed by General John Logan, national commander of the Grand Army of the Republic, in 1868—three years after the end of the Civil War.

The proclamation itself is a fervent tribute to the “soldiers, sailors, and marines who united to suppress the late rebellion…”

“We should guard their graves with sacred vigilance…” General Logan says.  “Let no wanton foot tread rudely on such hallowed grounds.  Let pleasant paths invite the coming and going of reverent visitors and fond mourners.”

On the other hand, the proclamation makes no allowance whatever for the confederate dead.

Indeed, the government’s reburial program that collected, at great effort and expense, the remains of hundreds of thousands of soldiers that lay strewn throughout the southern states, was directed only to the Union dead.

The confederate soldiers were intentionally left to rot where they lay.

There was, from the very first, a distinction made between the dead who officially deserved to be honored, and the dead who were actively degraded in both word and deed.

When, in 1868, the then Governor of New York Reuben Fenton suggested that human decency recommended the inclusion of confederate soldiers in the newly dedicated cemetery at Antietam, his sentiment provoked a storm of reproach. 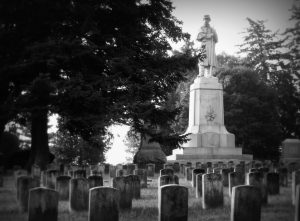 John Covode, a Congressman from Pennsylvania, expressed the dissenting view, which prevailed: the “personal guilt of the individual soldiers of the rebel army” barred them from such an honor.

The controversy around the burial of the dead at the end of the Civil War rekindled the bitter rift that divided the nation at the precise moment when efforts should have been made to heal the wounds of the war and re-unite the nation.

Unity is directly as powerful as the idea upon which it is based.         The Civil War was fought to maintain the idea of the United States of America — an idea – a unity, that eventually triumphed, but at a great cost.

The Civil War, which remains, to this day, America’s bloodiest war claimed the lives of approximately 750,000 soldiers and an unknown number of civilians.

And as the official policy around burial of dead shows, division is also as powerful as the idea upon which it is based.

They considered them rebels.

They could not overcome this divisive idea.

But the confederate dead – most of them – were buried.

The historian, and president of Harvard University, Drew Gilpin Faust, tells us, in her book “This Republic of Suffering” that, quote…

“The northern reburial movement was an official, even professional effort, removed by both geography and bureaucracy from the lives of most northern citizens; it was the work of the Quartermaster Corps, the US Army, and the federal government. In the south care for the Confederate dead was of necessity the work of the people… it became a grass-roots undertaking that mobilized the white South… 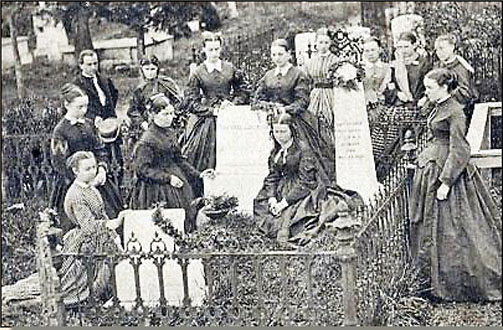 Ladies Memorial Associations sprang up all over the south and it was these organizations that took on the immense and grisly task of collecting and burying the confederate dead.

Honoring and burying the dead is an essential part of what it means to be human.

Every human religion has within it rituals and practices that govern how to honor the dead.

Today, the deep wounds that the civil war inflicted are largely forgotten.

We still have civil war monuments in our towns, but the time has passed when any of us would harbor any ill will to a person visiting from Virginia or Georgia.

As we celebrate Memorial Day tomorrow…

Let us remember the idea of unity…

As Jesus said: “That they may become one.”

Let us unify around the idea that we inherit from our ancestor’s in the Union army – that the United States of America is a true and noble experiment.

As a follower of Jesus Christ, I do not glorify war.

As a minister who professes the word of Jesus Christ, I abhor the terrible waste that is war.

And yet, I am one with the Confederate widows who defied a government to insist that the dead have dignity.

Because death separates us from ideology – no matter how hateful.

In death we are all human.

This Memorial Day, let us not glorify violence

Instead, let us honor the dead.