(Note: This is an old sermon from 2013.  I offered it again, this morning because circumstances in my life led me to it, and I felt I needed to re-state it so that I could try to live more fully by the sentiments stated therein.) 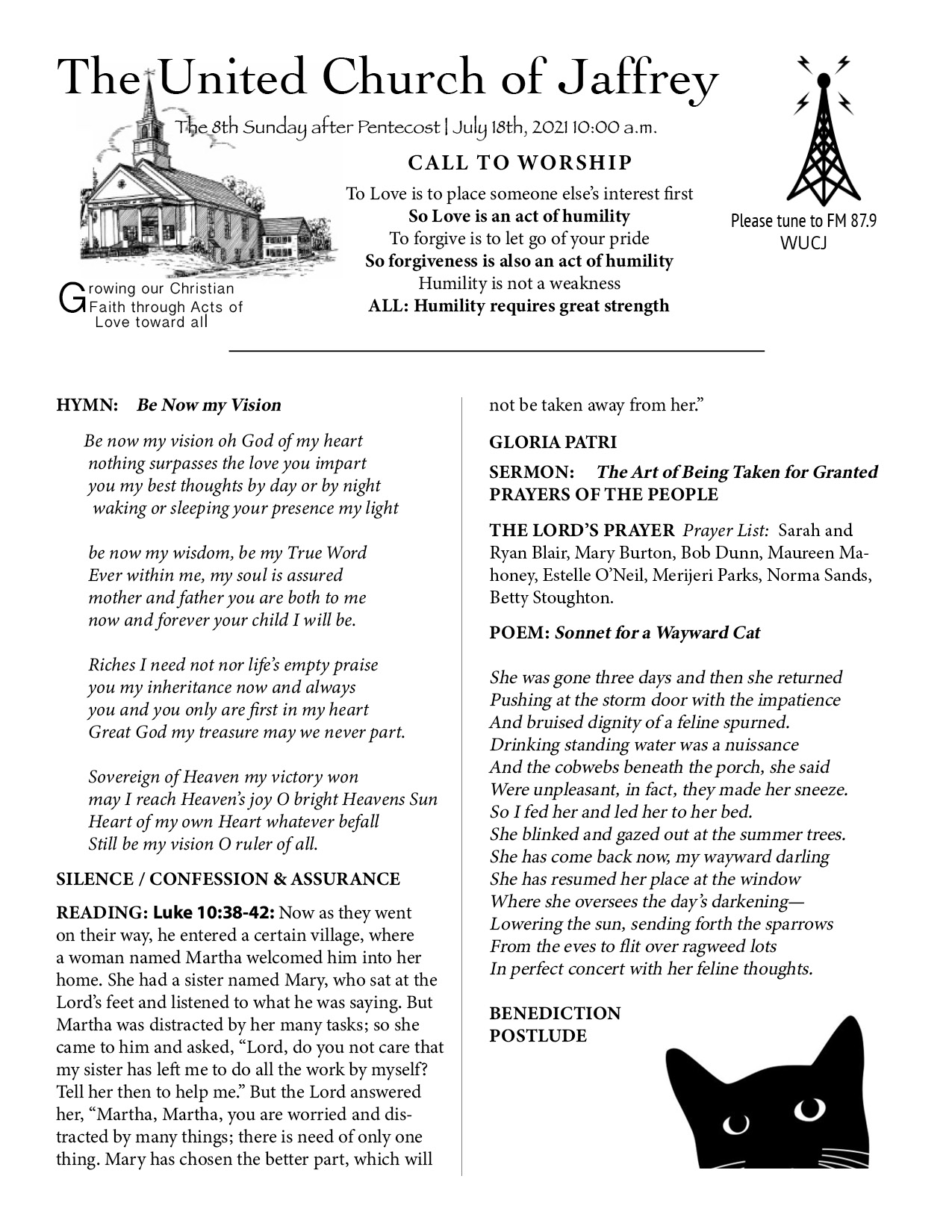 My cat is twenty-four years old,

I think that you all will allow that 24 is pretty old for a cat.

For the last several years, we’ve been watching her, wondering how much longer she will be with us.  Now and then she’ll take a bad turn, but before long she always rallies round.  She’s so skinny and spry, even in her old age.  We were beginning to think she might be immortal – until the last couple weeks.

It won’t be long now, I think.

She has begun to lose the use of her hind legs, so when I hear her on the stairs, I drop everything and scurry over and pick her up before she takes a tumble.

When I put her back down on a level surface, she lets out a half hearted, complaint, and wobbles off in the direction of the kitchen.  She doesn’t seem to know what she wants.  Eventually she just lies down under the dining room table and looks up at me with a mild, confused indignation.

When a cat lives to be 24 years old, it gathers some history.  My cat has a pretty interesting life.  She lived with my father, in New York City for the first 8 years of her life.  There were times when my father was alone, and the cat was his only companion – though he was not one to pay much attention to a cat.  He fed her and occasionally scolded her in Japanese, but otherwise left her alone.  The cat, who had too much innate self respect to be satisfied with this arrangement, used to climb up on the banisters and do all kinds of tricks to get his attention.  She was as good as any Olympic gymnast on that balance beam, flicking her tail back and forth and tossing back her head like a debutante at a coming out ball.

When Dad retired, my sister took the cat, and she lived with Mimi and Bill for the next 6 years.  During this time, Bill became a hot shot lawyer and got a job in France – so the cat went with them to Paris.  If you are a cat, it doesn’t hurt your myth to get to live in Paris!

I like imagine her sitting in a windowsill, looking out along ancient copper green rooftops and down at the narrow lanes of the old Latin Quarter, now and then clicking her tongue at French pigeon that strays too close.

In 2003, after my sister and Bill returned to the US, the cat moved in with me.  Cary and I had only just gotten married, and we lived in a third floor tenement in Somerville.  On her first day with us, the cat disappeared, and I spent three anxious days combing the neighborhood for her, but when she returned she soon accepted, and took control of her new home — her Villa of Reduced Circumstances.

And it came to pass, soon thereafter, that we were expecting our first child, and the two of them – my wife and the cat — formed a kind of conspiracy of unpredictable neediness.  Cary’s relief could only be found from the mint flavored tums – not grape flavored – no no, not the grape flavored!  The cat only drank running water, and she would stand at the sink, waiting for one of us to get up and turn the water on for her.  Naturally, the cat would not deign to take a sip unless the water was the right temperature, and was running at just exactly the correct flow rate.  As Cary’s belly grew, the cat was her constant companion, as if she was Cary’s own guardian angel, sent to comfort and protect her from that pesky male who insisted on hovering around at all times.  At night the cat curled up between us and complained if we dared shift in our sleep.  That cat!  What a princess!

Let us turn, for a moment, to the peculiar story that is told in the 10th chapter of Luke, about Mary, Martha, and Jesus.

To tell you the truth I’m not exactly crazy about how any of the characters act.

Mary strikes me as air-headed and spoilt.  She sits herself down at Jesus’ feet and ignores everything around her, even though there is plenty to be done.  Where does she get off, sitting around while her sister does all the work?  People like that really burn me up!  What a princess!

Martha, on the other hand, seems to be overwrought, anxious, and a bit of a noodge, in a kind of rude way.  She is so busy with the small stuff that she forgets that her guest is someone really worth listening to.  And where does she get off asking her guest to intervene on her behalf and tell her sister to help?  Why not talk directly to Mary? Its weirdly passive aggressive of her to complain to her guest about her sister!

And if I were in Jesus’ shoes, I wouldn’t respond to the problem by coming down so unequivocally on Mary’s side of the argument.  That seems kind of harsh to Martha, who, after all, is working hard to be as hospitable as she can to her guest.  If he were well brought up, I think Jesus ought to get up and help Martha himself – talking to both sisters as he helped dry the dishes.

But the gospel does not conform to my sense of propriety.  As usual, with the gospels, there is something going on here that is more profound than any rule you might find in Emily Post.

A dog welcomes you when you return to your abode.  A cat, with all her demands, helps you make your abode into a home.

When I go to pick up my sons from summer camp, they never say:

“Hi Dad, Gee, thanks for coming and picking us up!”

No.  They expect me to show up.  They take it for granted that I will.

“Gosh, Dad, it was thoughtful of you to bring us that cold water so that we can get hydrated and feel better and not be cranky.”

They don’t bother thanking me for taking care of them.

When my son wakes me up in the middle of the night and insists that I get up and stumble across the house to tuck him back in again, he never bothers to thank me.

It would be weird and unnatural if he did thank me for those things.  If I expected him to, I’d be in for a lot of heartache.

In this way, children are like cats.  They are an ungrateful bunch.  But that is exactly how it should be.

To be ungrateful – or maybe the better way to say it is – to be unaware of the need to be grateful – is the best way to be a child.  The child who is blissfully unaware of the terrible traffic jam her parents had to battle through in order to get to camp on time to pick her up – she is the child who knows (without needing to be told) that she doesn’t have to worry.  Her world is secure.

If you are being taken for granted by your children – you are doing something right.

Cats and children.  They teach us something essential about love.  They perfect our ability to be taken for granted.

In today’s story, Mary is like the cat, or the child, who carelessly takes it for granted that she will be cared for.  Martha, on the other hand, is the caregiver who has not yet learned the art of being taken for granted.

There is something important, though, that needs to be said about the art of being taken for granted.

The child or that cat enjoys a natural lack of awareness about all that their caregivers go through in order to make their lives safe and happy.  But the caregiver?  The caregiver, the parent, the Good Samaritan – in other words, the one who is being taken for granted – does NOT enjoy the privilege of living a carefree, happy-go-lucky life.

And that, my dear brothers and sisters in Christ, — that paying attention is just what Mary was doing in this story.

As we mature, our lives transform from the happy, secure, careless child, to the happy, busy, fulfilled, caring adult.

This transformation has everything to do with love.  Being in a family teaches us that love has many aspects, but the love that is our best teacher – the love that really requires us to sit down at Jesus’ feet and pay attention, is the love that perfects that art of being taken for granted.    Amen