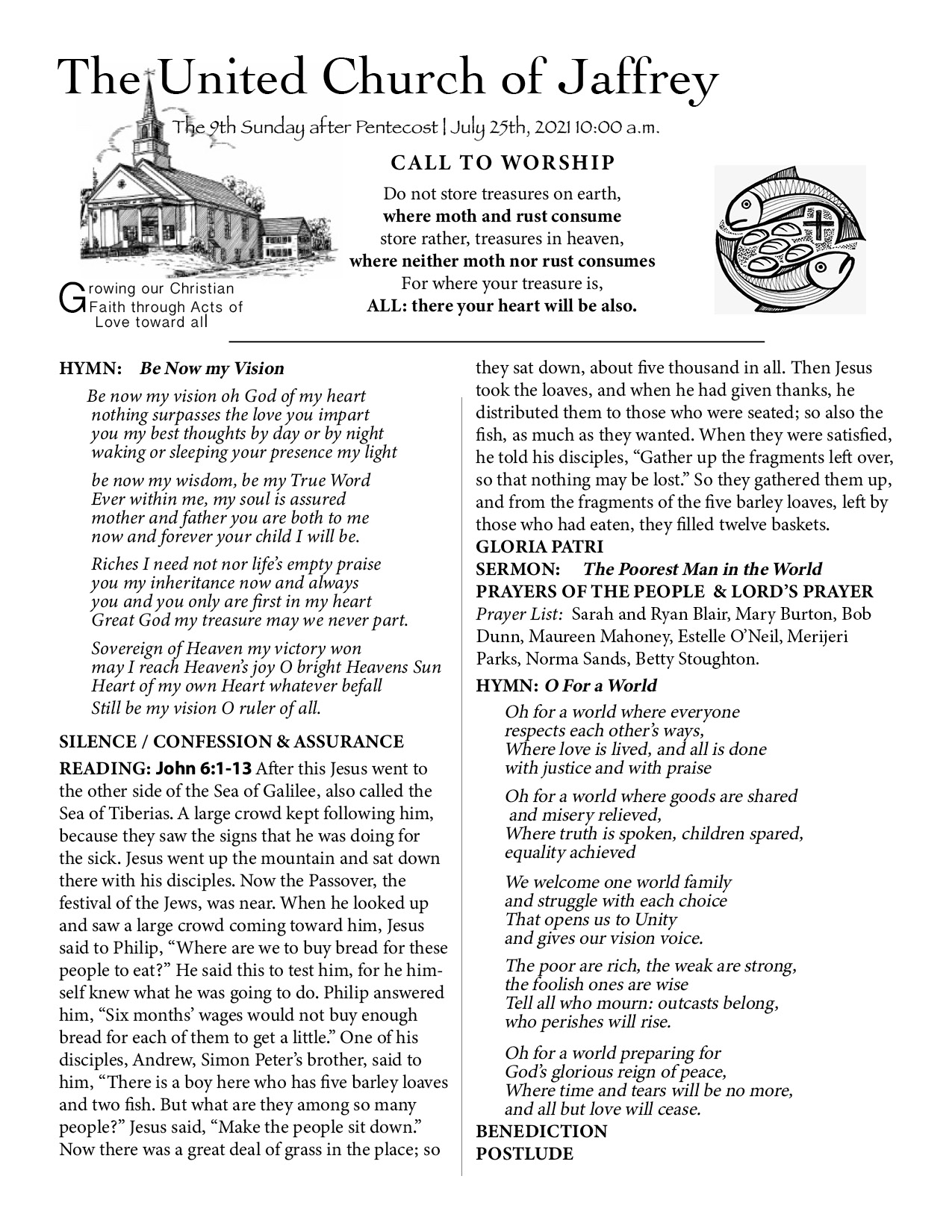 The richest man in the world flew into space last week.

The richest man in the world (who’s net worth is over 200 billion dollars) got into a rocketship that he had built. According to Wikipedia, he has spent 1 billion dollars every year since 2016, to fund the development of his space program.

It is now 2021, so, I suppose that means that he has spent 5 billion dollars on this desire that he has to fly into space.

In a news conference last week, the richest man in the world answered this question. He said:

So that’s what he wants? He wants to experience a kind of personal transformation?

Generally speaking, as a minister, I am in favor of personal transformation.

I suppose it is his money, and he can do what he wants with it…. right?

When you have it all, you can do what you want… is that right?

That, at least, is how our system — our very human system — seems to work.

You’ve heard this story before. I hardly need to tell it to you again. But I will, because, as usual, there is something crucial being told here that I want to get at.

A great multitude of people have followed Jesus because they ​​”saw the signs that he was doing for the sick.” They all ended up in the sea of Galilee, where, presumably, there were no restaurants readily available back in the 1st century and even if there were, there is no way (as Philip helpfully points out), that they could afford to feed such a crowd.

If you look at this story purely in terms of how the plot is put together, you can see that there are a number of factors that must fall into place to create this perfect storm of hungry people.

Jesus is a great healer and teacher.
People hear about it.
People start to follow him
A crowd develops
They all end up in a barren place with no food
People get hungry.
There is no food.

But wait… There is some food!

Andrew, reports that “There is a boy here who has five barley loaves and two fish.”

But even as he says this he laments: “But what are they among so many people?”

Most of us, I would guess, have never followed a messiah into the wilderness. The particulars of this story are not our particulars — but the result — the difficulty that results, is a familiar one to all of us.

There has never been a time in the course of human history, when we have not struggled with the conundrum that is at the heart of this story.

There is simply not enough to go around.

Everyone has needs, but there is only enough available to satisfy a few.

And what happens to the rest?

Andrew and Philip and you and I, we know the answer.

What happens to the rest?

For Andrew and Philip and you and I this is an all too familiar human story.

I don’t know about you, but for me, this is the moment in the story when I start looking around and sizing up the situation. My human instincts kick in.

For me, standing there next to Jesus at the sea of Galilee, I am aware of a single pressing concern — to somehow insure that I am one of the small number of people who get to eat.

This means that I have to figure out how to deprive everyone else of their ability to satisfy their needs.

In a very real sense — in order to eat, I need to make sure others go hungry.

This, I’m afraid, is what we humans do.

And we’re very good at it.

We don’t like it… it’s not pleasant, this process of denying people what they need to survive… but it needs to be done, so that we can have what we need.

And since we are such ingenious and adaptable creatures, we create elaborate systems to make it seem like we aren’t depriving people of their needs, when actually we are.

These systems are so accepted, we don’t even question them. For example, have you ever noticed that if you have money in the bank, the bank gives you more money, in the form of interest? If, on the other hand, you have no money in the bank, what happens? The bank charges you a fine.

It’s a great system if you are the richest man in the world. You get to do what you want.

It’s not so great if you don’t have any money.

If the richest man in the world were on the shore of the Sea of Galilee instead of Jesus, this is how the story would end.

The richest man in the world would say unto Andrew and Philip:

“Andrew go, now, and kill the tenderest, most delicious lamb, and make a great feast. While he is gone, Philip, I want you to get all this crowd of people to build me a nice waterfront house, facing the water, so that when my food arrives I can have a nice view while I eat my meal and I can forget about all you people who are still hungry — because worrying about you people would spoil my appetite.”

I have painted a rather ungracious picture of the richest man in the world… Would he really be so crass?

He doesn’t have to be.

That’s the beauty of it.

The system does it for him.

Because he has money.

In our, all too human system — money equals power.

This gospel story has a different ending.

You know how it ends.

Jesus has a different plan.

Instead of figuring out how to deprive everyone, except himself, of food (which is our human way of doing things), he figures out how to provide everyone with food.

I know what you are thinking…

You are thinking — but Rev. Mark — we are not God, so we can’t perform miracles… so the decision to provide everyone with food, is not an option for us. Hence we have to protect our own interests in order to survive.

It’s true — last time I checked we would not be able to feed an entire church potluck on one box of Mac n’ cheese. We are human, we are not God.

But that’s not the point of the story.

The point is this…

Our all-too-human tendency is to react to scarcity by systematically creating injustice. God reacts to scarcity with compassion — by placing others first.

God is not motivated by survival. So God doesn’t choose personal well being at the expense of everyone else.

God is motivated by compassion, and so God chooses to provide for others first.

When personal well being is the first impulse, then you have an economic system.

When compassion is the first impulse — then you have a religion.

When the Richest man in the world returned from space he shared a video on Youtube that shows the crew members cavorting around in zero gravity.

They laugh and play catch with an orange ping-pong ball.

They throw skittles and delight in catching them in their mouths.

It appears that this old party trick is easier to do in zero gravity.

So… is this what personal transformation looks like to the Richest man in the world?

Back on earth, the richest man in the world held a news conference. He said this:

I think the richest man in the world might have spared us that little detail. It is rather crass to reveal the truth of our system.

That 5 billion dollars he spent to go catch skittles in space? Did he earn it? Was it his to spend?

According to Mr. Google, if you include his stock options, the richest man in the world makes as much as 180 million dollars a day.

The richest man in the world has admitted that his little space joy ride was made possible by the massive systematic exploitation of his employees.

If there was some self-knowledge behind this admission (and it wasn’t just a blunder) — this might, after all, be his sought after personal transformation.

But I doubt it.

The richest man in the world has been systematically blinded by his wealth.

His success depends upon a willingness to have no compassion, and so by God’s standards he might be not actually be the richest man in the world.

He might be the poorest man in the world

You and I are lucky.

We’re lucky not to have that money — all that blindness.

For us, there is still the possibility of compassion.