Can you hear the great power of these words?

Can you hear, how this proclamation, from the One hundred and eighteenth psalm, seems to ring down through the ages, like a clear bell?

The biblical scholar Robert Alter has called the book of psalms the “hymnbook of the Jewish people” and, indeed, even after putting up with translation after translation, the psalms reach out and grab us with undiminished power, because they are not just words,

They are not just songs,

They are not just prayers,

Have you ever heard of a prayer spoken as a demand?

We do not speak to God in the language of demand.

We speak to God with the language of humility!

Prayer, I have said before, form this pulpit, is the language of humility!

But can we also speak to God through the language of demand?

This psalms seem to give us this license…

“Dear God, if I a promise to be good, would you do me a favor and please open to me the gates of righteousness?”

The psalmist does not tip-toe through the tulips.

The psalmist does not beat around the bush.

This is not the language of “please and thank you.”

The psalms say it strong. 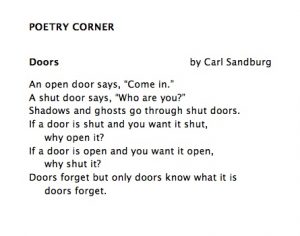 In the today’s poetry corner, there is a poem by Carl Sandburg entitled “Doors.”

Sandburg’s poem is not a psalm.

The poem is not making a giant proclamation about salvation and the universe.

It is doing something more humble than that.  It is making an observation about human life.

And with each door, we make ask ourselves a question.

The question of the door.

Should we open the door?  Or should we close the door?

Open, or closed?  That is the question of the door.

When we shut the door, we ask the person on the other side “who are you?”

If we leave the door open, we tell the person on the other side: “come in.”

An open door says “I trust you.”

A closed door says “I’m not sure about you.”

What should we do?

Should we trust people and leave our doors open?

Or should we be safe and shut our doors?

What does God do?

Does God “open the gates of righteousness”?

Or does God “close the gates of righteousness”?

The human answer to the question of the door, is “it depends.”

We answer the question of the door with an “it depends” tool.

The “it depends” tool is called a “lock.”

Sometimes we leave the door open,

And sometimes we close it and lock it.

It is hard to trust you, because I don’t know you.

How can I trust you? 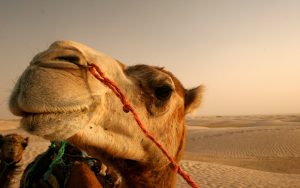 There is an old Sufi saying.

(Sufism is a sect of Islam that seeks God through mystical experience.)

That says it all, doesn’t it?

This is the human perspective on the question of the door.

We trust that there is an ultimate goodness in the universe, but we are not fools.  We praise God for making camels, but we know that camels wander away, or are stolen.

That’s just the way things are.

But what about God?

What is God’s answer to the question of the door?

When we use the powerful words of psalmist and proclaim “Open to me the gates of righteousness!

What should God do?

Should God trust us and say “come in?”

Or should God look at us suspiciously and ask “Who are you?”

Now if we take the traditional view of things, and think of God as “all knowing, all powerful, and entirely good” we see, immediately, that God’s answer to the question of the door is likely to be different from ours.

If God is all-knowing, then, unlike us, God knows everything there is to know about the person who is at the door.

God does not have to wonder about the person’s motives.  God knows.

The all-powerful part means that God is more powerful than any person who comes to the door.

This, of course, means that God has nothing to fear from the person at the door.

The all-good part, means that God will want to throw open the gates of righteousness rather than bar them.  Barring the gates would mean keeping some people away from God – which surely is not as good as being with God.

Knowing all, God is not suspicious, as we are.

All powerful, God has no need to fear.

Being entirely good, God wants us to come in.

If we follow this traditional view of God, it seems that God would at least be at liberty to leave the door wide open at all times.

But is this what God does?

There are many schools of thought on this question.

Every religion, including Christianity, has within it a powerful us-an-them tendency that essentially says: “We are saved and they are damned.”

Ultra-conservative “Wahhabi” Muslims of Saudi Arabia, for example, believe that they alone have the correct understanding of the Koran, and that not only people of other religions, but even other Muslims, are all damned to perish in hell for eternity.

But we need not go so far afield to find this tendency.  The Puritans who were our forbears in the Congregational Church believed in a strict form of Calvinist theology that stated, quite bluntly, that God chose an “elect” group of people who were predestined to be saved, and everyone else was lost.

And naturally, the “elect” were “us.”

Religion has a troubling relationship with the question of the door.

A moment ago it seemed reasonable to think that God would fling open the gates of righteousness and welcome us all without suspicion or fear.

But institutional religion seems to take a much harder line on the door question.  Religions often turn God into a kind of stern, embittered figure who only opens the door a crack, to admit only the proper “kind” of people.

Salvation becomes a kind of club.  A place reserved for people who know the secret knock, or handshake.

Is that really our God?

Consider the story of Palm Sunday.

This fascinating story has, embedded within it, the problem of the door.

Jesus is welcomed by the people of Jerusalem, who wave palm leaves and sing Hosanna’s.

This all seems pretty promising.

Jesus comes to the door, and the door is opened.

But Jesus is not just another person coming to the door.

Jesus comes to Jerusalem as God.

How do we know this?

Jesus lived before IPhones.  There was no app to tell him there would be a donkey waiting for him.

When Jesus returns to Jerusalem, he knows about the donkey because he knows what is going to happen before it happens.

The Bible explains this in one of two ways – he is either a prophet, or he is the Messiah.

And since Jesus knows what will happen before it happens, he, of course, knows what it means for him to return to Jerusalem.

No one else knows.

But he knows what lies in store…

He knows about the betrayal

He knows about the arrest

He knows about the denial

About the conviction and the flogging.

No one else knows,

He knows about the crucifixion.

This story flips problem of the door.

In this story, we are not at the door.

God is at the door.

We open the door

And God comes in.

God comes in, even though God knows what is going to happen.

At first there are palms, but the door that God has walked through is a door into human frailty.

The door that God has walked into is the door of human broken-ness.

This is a door that leads to horrible violence.

A door that leads to death.

There is plenty of reason for God to be suspicious.

But God walks in anyway.

The psalms are a clear, hymn-like bell that ring across the centuries.

Not long ago, in one of the governance meetings, here at the United Church of Jaffrey, the question arose:

“Should we lock the doors to the sanctuary?”

Currently, the doors to the sanctuary are unlocked at all times – 24/7/365.  Anytime of the day or night, that anyone wants to come into this sanctuary, they can.

Aren’t we asking to be robbed?

Are homeless people going to sleep in our pews?

These are good questions.

Trust in God, but tie up your camel!

Believe in goodness, but don’t let the world play you for a fool!

The governance committee considering the question sat for a moment in silence.

Then someone, I can’t remember who, told a story.  A person in town had been feeling suicidal.  That person tried to go to a church, but the churches were locked.

Eventually the person found our church.

Today, in Jaffrey, we throw open the doors of vulnerability.

We throw open the doors of love.

Not because we are foolish

But because we follow the example of Christ, who was willing to sacrifice all, for love.

Today, in Jaffrey, we do not say

Open to me the gates of righteousness…

Open to all the gates of righteousness!