Hear again the words of the Apostle Paul that Sarah just read for us.

To encourage the newly established church in Corinth, Paul wrote:

According to the grace of God given to me, like a skilled master builder I laid a foundation, and another man is building upon it. Let each man take care how he builds upon it.  For no other foundation can anyone lay than that which is laid, which is Jesus Christ.

Paul is talking about tradition.

Paul illustrates the nature of tradition by using the metaphor of constructing a building.

A building begins with a strong foundation.

This foundation, Paul says, was laid by Jesus Christ.

But the foundation, which is the structural basis of the building – is only the first step in constructing the building of tradition.

Jesus Christ gave us the foundation, but ordinary people –

build upon that foundation, and make it into a tradition.

“Let each man take care how he builds upon it,” Paul says.

When you build upon the foundation that Jesus laid down for us, take care.

It is a sacred trust.

How do we do this?

How do we – regular, straight-forward folks living our regular straight-forward daily lives, driving back and forth to work through in the hills of New Hampshire – how do we build upon the foundation that Christ laid for us?

Is it right that we – you and me – should think so highly of ourselves as to imagine that we could help construct the tradition that Jesus founded?

Well yes… I believe it is right.

It is right for the youngest of us.

It is right for the oldest of us.

It is right for the poorest of us.

It is right for the weakest of us.

It is right for the all of us, for each one of us to believe that we are worthy to be Christ’s hands

And to be Christ’s heart,

Doing his work in the world.

There is a story that is told about a man named Trevor Huddleston.

In September of 1940, Huddleston sailed from his native England to become a parish priest in South Africa.  Walking through a black slum called, Sophiatown, Huddleston encountered a black woman who was standing in the street with her small son.

Huddleston took his hat and greeted the woman politely.

This is a small act?

The smallest act of all – saying hello?

But this act was unheard of.

In 1940 no white man ever took off his hat to greet a black woman.

It was not done.

But this small act made a huge impression.

The woman’s name was Aletta Tutu.

And her son, who stood beside her, watching the whole thing very carefully, was named Desmond.

Anyone who has visited me during my office hours will know that my office, here at UCJ is quickly filling up with books.

My father, you see, was a theologian – a professor who studied and taught religion – in particular Christianity.

His specialty – the thing that he became renowned for – was his scholarship concerning Christianity in Asia.

Because of this, my father’s life was filled with books.

All the walls in every home ever knew, were covered, floor to ceiling, with books.

We didn’t have wallpaper.

It was rare to see my father when he was not either reading or writing.

That was his life.

When he was not teaching, Dad was reading.

When he lived with me at the end of his life, he was terribly sick, but that didn’t stop him from sending me out to the bookstore with lists of books to buy.

He’d only just managed to get his books properly sorted on the bookshelves in his study when he ended up in the hospital and died.

And suddenly, all those books – that vast library of human knowledge that he’d been sifting through for more than half a century – was abandoned, and I…

could not get rid of them.

I couldn’t do it.

I’d spent too many years admiring them –

wondering what was inside them

wanting to open them.

Wanting, somehow, to find the internal strength and the discipline of mind to tackle those books… to discover what was to be found there.

But when he died, I was too grief stricken to imagine reading one book, let alone begin the lifetime project of tackling them all!

So I did the only thing I could figure out to do – which was to go down to Staples and buy fifty bankers boxes.  I filled them up with Dad’s books, put numbers on the boxes, and stacked in the basement.

I hooked up a dehumidifier to make sure they didn’t get moldy and rot, and then…

If any church was crazy enough to call me, I said to myself, I would have an office.

And if I had an office, I’d have a place for all my father’s books.

Every time I am about to make the drive up to Jaffrey, I head down to the basement and grab one of those banker’s boxes and throw it in the trunk of my Prius.

This morning’s gospel lesson from the fifth chapter of the book of Matthew contains within it two of Christ’s most enduring and oft-quoted teachings.

Indeed one might consider these teachings to be foundational.

That is to say, if, as the Apostle Paul said – Christ made the foundation, and we take care to build upon that foundation – perhaps we can consider these two teachings – the ones I am about to lift up for your consideration – to be important parts of Christ’s foundation.

Here are the teachings.

“…if anyone strikes you on the right cheek, turn to him the other also…”

We, of course, know this teaching as “turn the other cheek.”

Most people — the non-churched,

people who practice other religions…

even those who practice no religion at all –

most people know what the phrase “turn the other cheek” means.

It means that when someone is unjust to you, that does not give you the license to be unjust to them.

It means that injustice is wrong, and we must avoid inflicting injustice on others – even if they inflict it upon us.

It means that humility is closer to God than vengeance. 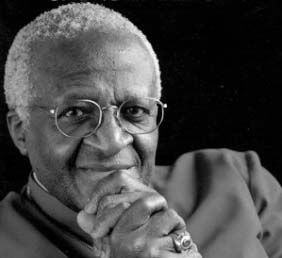 In 1996, two years after the abolition of the Apartheid system in South Africa, the Truth and
Reconciliation Commission began its difficult work.

The Truth and Reconciliation Commission offered the possibility of amnesty for perpetrators of apartheid era crimes, if the killers came forward and told the truth.

In most cases, the murderers were required to confront the wives and mothers of the people they had killed, and ask their forgiveness.

The Truth and Reconciliation Commission was based upon the idea of restorative justice, not retributive justice.

The chairman of the Truth and Reconciliation Commission was a man named Desmond.

The other famous teaching that we find in today’s reading goes like this:

“Love your enemies and pray for those who persecute you”

These are hard teachings.

They are hard because they contradict our deep instincts.

But religion does not ask us to do what is easy.

Religion asks us to do what is hard.

Christ does not ask us to act instinctively.

Christ asks us to act religiously.

Our instinct is to retaliate.

Our intention is to seek vengeance.

It comes naturally to us.

One thing that does not come naturally to us, is to love those enemies.

It does not come naturally to us to pray for those who persecute us.

That does not come naturally to us

But Christ demands it of us.

It does not come naturally to us…

It comes religiously to us.

We have tasted the fruit from the tree of the knowledge of good and evil – and so, unlike other creatures, we are aware of our own death

And the death of our enemies.

And the price of this knowledge, is that we must act religiously, not instinctively.

It is not easy.

But we must act religiously

A few Sundays ago, I unloaded the banker’s box number 11 onto the shelf in my office.

I was pleased to discover that I’d brought up a box of books that were mostly on the theme of Black and African theology.

It just so happens, I am teaching a class this semester at Northfield Mount Hermon that will involve reading some work by man named Desmond —  Desmond Tutu, the Anglican Archbishop of Capetown who won the Nobel Peace Prize in 1984 and who, along with Nelson Mandela, became known around the world as one of the most important figures in the fight to end Apartheid in South Africa.

Among the books I’d just piled onto the bookshelf in my office was a slim volume with Tutu’s name inscribed in the spine.  Fetching it from the shelf, I held in my hands a book entitled “Crying In the Wilderness: The Struggle for Justice in South Africa.”

When I opened the book, something fell from the pages onto the floor of my office.

I picked it up and examined it. 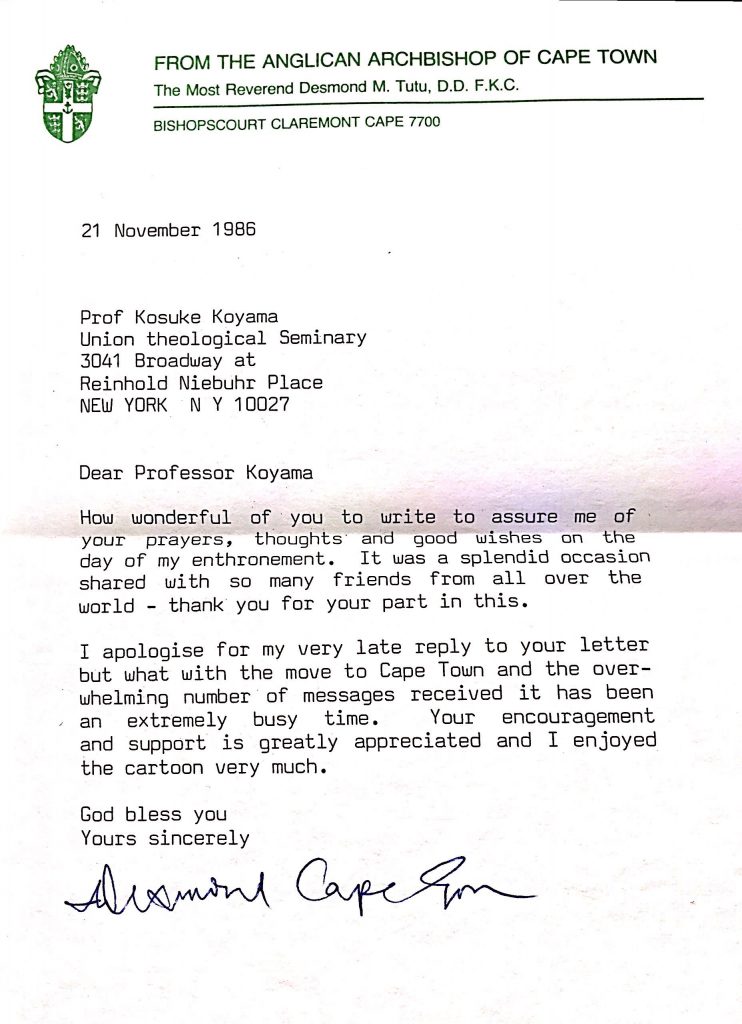 Through acts, we build upon the love Christ taught us.

Simple acts, like taking off a hat to show respect.

Religious acts that overcome our instinct for violence and vengeance.

It is through acts, small, and grand that we – the smallest, youngest, weakest, and most ordinary people – build upon the foundation that Christ laid for us.

The important thing is that we act.

That we act with love.

And that we do not consider the color of a person’s skin when we take our hats off in greeting.

Our acts of love are not for some.

They are acts of love toward all.